“For the second day in a row, truck drivers who are in favor of the government of President Jair Bolsonaro and against the ministers of the Supreme Federal Court (STF) … promote[d] demonstrations on highways across the country this Thursday,” Globo News reported on September 9.

“The demonstrations were registered in 16 states. Some highways started to be unlocked in the morning. In São Paulo, the roads were cleared, but the protesters continued on the [highways’] shoulders,” Globo News relayed.

Brazil’s Federal Highway Police (PRF) reported 53 blockades by commercial truckers on federal roads on the morning of September 8. The road blockages on Wednesday delayed or stopped traffic in many areas and threatened to affect grain shipments to ports in other locales, prompting President Bolsonaro to ask truckers participating in the demonstrations to stand down.

“Speaking to the truckers out there, who are our allies, these blockades hurt our economy,” Bolsonaro said in an audio message sent to truckers’ groups via the messaging app Whatsapp on September 8. Reuters said it obtained a copy of the audio clip on Wednesday.

“They cause supply shortages, inflation and hurt everyone, especially the poorest,” Bolsonaro said of the truckers’ blockades. 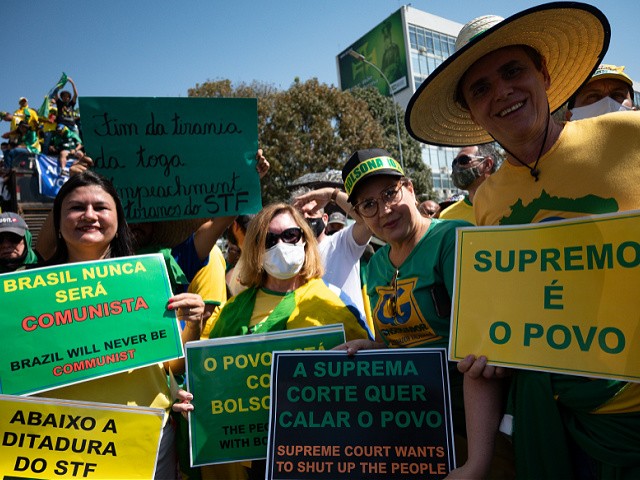 Supporters of President of Brazil Jair Bolsonaro pose for a photo as they hold signs to show their support during a protest in front of the National Congress on September 7, 2021, in Brasilia, Brazil. Brazilians have taken the streets as they commemorate their Independence Day to show both support and rejection for Jair Bolsonaro’s administration. (Photo by Andressa Anholete/Getty Images)

Many supporters of President Bolsonaro in Brazil are opposed to the Brazilian Supreme Court’s decision on August 4 to order an investigation into the president’s alleged “slander” and “incitement of criminal acts” in connection with his “undocumented claims of massive vote fraud” in July.

Brazil’s top court ordered the investigation into Bolsonaro in response to his criticism of a federal electronic voting system used in the country since 1996. The president claimed in July the electronic system is subject to fraud. He suggested Brazil’s Congress approve a constitutional amendment making it compulsory to print out backup copies of electronically cast votes in Brazil’s next presidential election, slated for October 2022.

Bolsonaro’s call for “printable and auditable” paper ballots provoked the ire of Brazil’s Superior Electoral Court (TSE), which placed the president under investigation for his July statements on August 2. The TSE then asked Brazil’s Supreme Court to launch an additional investigation of Bolsonaro for his allegations that the country’s federal voting system allows for the possibility of fraud. The top court complied with TSE’s request, announcing on August 4 its decision to launch an investigation into President Bolsonaro’s alleged “slander” and “criminal incitement.”