Trump announced in a statement:

Joe Kent is a retired Green Beret and Gold Star husband running against RINO and incompetent Congresswoman Jaime Herrera Beutler in the 3rd District of the State of Washington. Joe served his country proudly for many years and understands the tremendous cost of America’s wars in the Middle East, and elsewhere. In Congress, Joe will be a warrior for the America First agenda, unlike Jaime Herrera Beutler who voted, despite the facts, against the Republican Party and for the Democrats’ Impeachment Scam.

Joe Kent is strong on Crime and the Border, loves our Military and our Vets, and will protect our Second Amendment, which is under siege. I met Joe at Dover Air Force Base on the evening that his wife was being brought back from the Middle East, where she had been killed in combat. It was a very sad moment in Joe’s life, but I was incredibly impressed with him and told him that he should someday run for office—we need his voice and leadership in Washington, D.C. Now he is running, and Joe Kent has my Complete and Total Endorsement!

Kent said in a tweet, “Thank you very much President Trump! I’m honored & ready to take our country back!”

Thank you very much President Trump!

I’m honored & ready to take our country back!

Kent first met Trump after his wife, Navy Senior Chief Petty Officer Shannon Kent, was killed while fighting ISIS terrorists in Syria in January 2019. Kent told Breitbart News in May 2020 about his first meeting with Trump at the Dover Air Force Base.

He said Trump had obviously read up on Shannon, knew she was from New York, knew what her father and uncle did during 9/11, and knew his background as well. They talked for about 20 minutes, about Shannon and his views on Iraq and Syria. 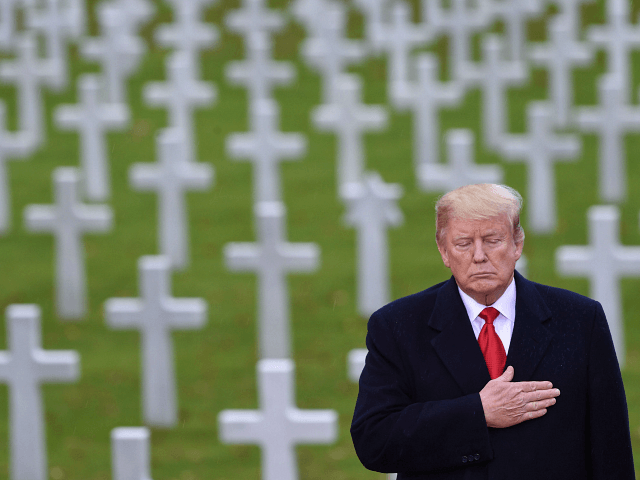 President Donald Trump takes part in a US ceremony at the American Cemetery of Suresnes, outside Paris, on November 11, 2018, as part of Veterans Day and commemorations marking the 100th anniversary of the 11 November 1918 armistice, ending World War I. (Saul Loeb/AFP via Getty Images)

“He asked me my opinion on what was going on in Iraq and in Syria, and a couple of months later for Memorial Day, he had invited quite a few Gold Star families to the West Wing. That did not receive any publicity,” he said.

Kent told Breitbart News in June he decided to run after Beutler voted to impeach Trump.

“The Republican congresswoman who I voted for stabbed us in the back and voted for the impeachment of President Trump,” he said, adding:

She’d always kind of been a very weak Republican, very typical of the establishment. She voted against the construction of the border wall. She voted to keep our troops in Syria, our troops in Afghanistan. She voted for Obamacare, but this was the straw that broke the camel’s back. So I saw basically our entire country kind of being driven off the cliff by the Democrats, and I wanted to do something.

He added, “I’ve never been able to ask other people to go fight for me. So throwing my hat in the ring, once more to go serve and take the fight to Congress to restore our country’s freedoms.”