Rep. Andy Biggs (R-AZ), chair of the House Freedom Caucus, is pressuring House Minority Leader Kevin McCarthy (R-CA) to bring forth a rule change that would allow for the removal of Reps. Liz Cheney (R-WY) and Adam Kinzinger (R-IL) from the House Republican Conference, according to a letter obtained by Breitbart News.

Biggs called Cheney and Kinzinger “two spies for the Democrats” because of them being privy to GOP Conference conversations while simultaneously serving on House Speaker Nancy Pelosi’s (D-CA) January 6 select committee, according to Biggs’s letter, dated September 2. 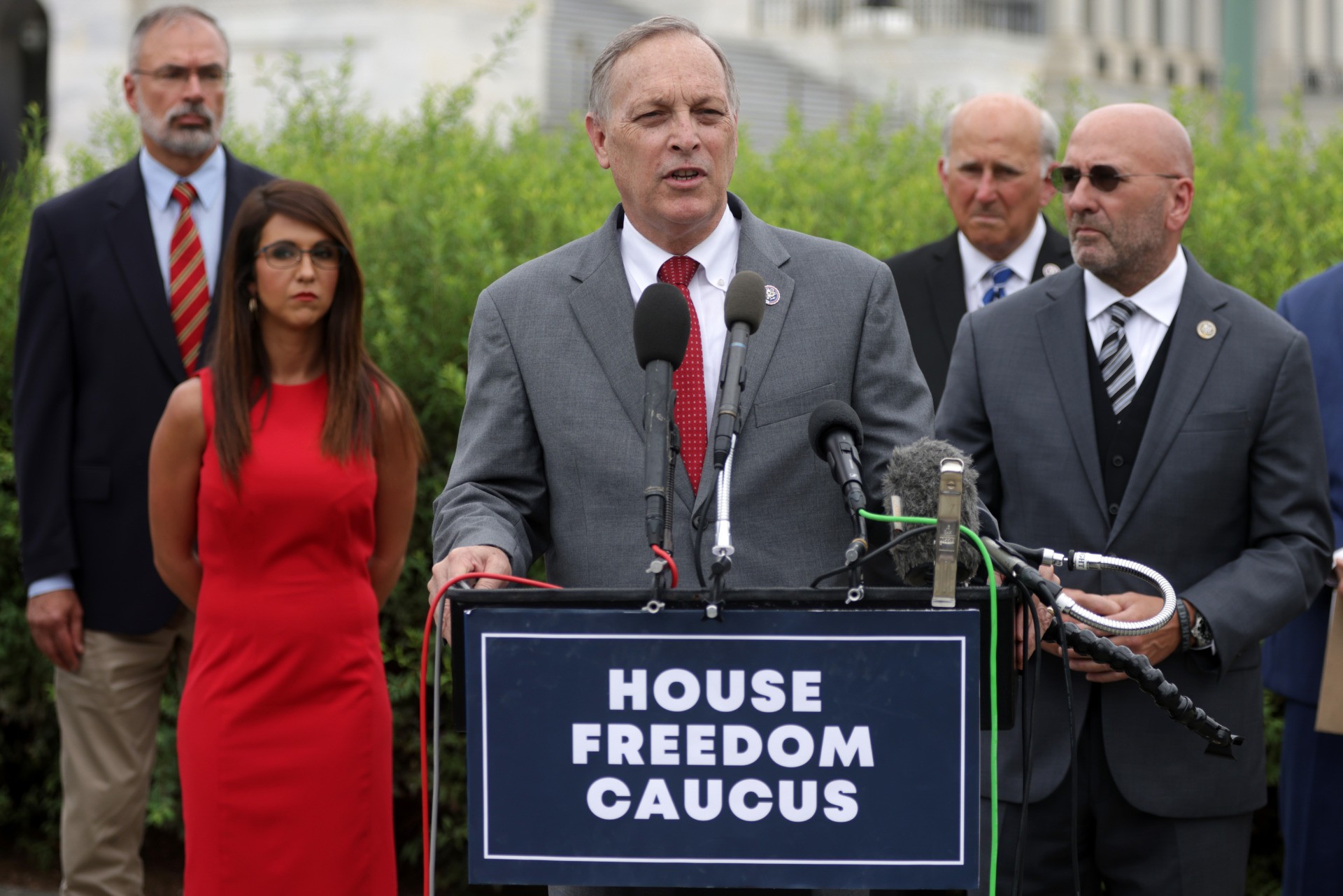 The Arizona Republican contended that the pair of Never Trumpers should not be able to listen in on upcoming conference discussions centered around defending against the predominantly Democrat position that the riot at the U.S. Capitol on January 6 amounted to an “insurrection.” Biggs stated he did not trust that the pair would not report back to Pelosi’s committee and hamper Republicans’ ability to defend themselves given Cheney and Kinzinger both have sided with Democrats in their stances on the January 6 chain of events.

“Congresswoman Cheney and Congressman Kinzinger are two spies for the Democrats that we currently invite to the meetings, despite our inability to trust them,” Biggs stated. “Speaker Pelosi is perpetuating the false narrative that House Republicans are responsible for the events that took place at the Capitol on January 6th.”

She has continued to brand the events as an insurrection, despite the Director of the Federal Bureau of Investigation testifying the events do not meet that threshold. During his testimony before the House Judiciary Committee, Director Wray specifically stated that most people gathered at the Capitol were truly “peaceful protestors exercising their First Amendment rights.” Many others weren’t engaged in violence, they were simply where they were not legally supposed to be, and a number of those have been charged with trespassing. And, with justification, the FBI and the Department of Justice have been investigating and arresting those who attacked police and vandalized the Capitol.

But the FBI’s investigation and prosecutions are not enough for Speaker Pelosi. She needs publicity and narrative. She needs to demonize Republicans. And this Select Committee is her path for doing so. The Select Committee allows her to target the Republican Members of Congress she thinks will be most beneficial to her narrative; those that she thinks she may be able to unseat from Congress; those whom targeting will raise her the most amount of money.

Once Speaker Pelosi made her intentions for the Select Committee clear by denying Congressman Jim Banks and Congressman Jim Jordan from serving on the Select Committee, you rightly requested that no other Republican Members agree to serve on her witch-hunt taskforce. Congresswoman Cheney and Congressman Kinzinger defied that request, offering to aid the Democrats in their investigation. We cannot trust these Members to sit in our Republican Conference meetings while we plan our defense against the Democrats.

Read a full copy of Biggs’s letter below:

In addition to seven Democrats, Pelosi appointed Cheney to the committee, and later also appointed Kinzinger after McCarthy — who was granted a selection of five members to make for a total of 13 members on the committee — pulled all his selections off the committee when Pelosi rejected two of them, Reps. Jim Jordan (R-OH) and Jim Banks (R-IN).

McCarthy, as he was fuming during a press conference, announced he would forgo his participation in the committee process entirely, calling it a “sham” that has “lost all legitimacy” because of the rejection of two of his members. Nevertheless, Cheney and Kinzinger have bucked party lines and opted to participate on the investigative committee alongside the seven Democrat members.

The committee, which has subpoena power, has already held a hearing and issued its first wave of document requests — from eight executive branch agencies and 35 social media and communications companies. The committee is seeking, among hundreds of names, communication records for Trump and his family members, Biggs, Jordan, and several other congressional Republicans.