BEDMINSTER, New Jersey — Former President Donald Trump ripped into establishment Republicans for getting “duped” into supporting the Democrat agenda during President Joe Biden’s administration, arguing that the “only reason” Republicans even exist is because of how bad the Democrats are on policy.

After viciously criticizing Biden’s agenda and mishandling of the Afghanistan withdrawal during a nearly two hour-long exclusive interview here at his golf club in northern New Jersey, Trump told Breitbart News that the Democrats “stick together” something he said Republicans do not do. Trump named names, too, of such establishment Republicans he is unhappy with — name-checking Sens. Mitt Romney (R-UT), Ben Sasse (R-NE), Bill Cassidy (R-LA), Lindsey Graham (R-SC), and even Senate Minority Leader Mitch McConnell (R-KY) — with whom Trump has been feuding since late last year. 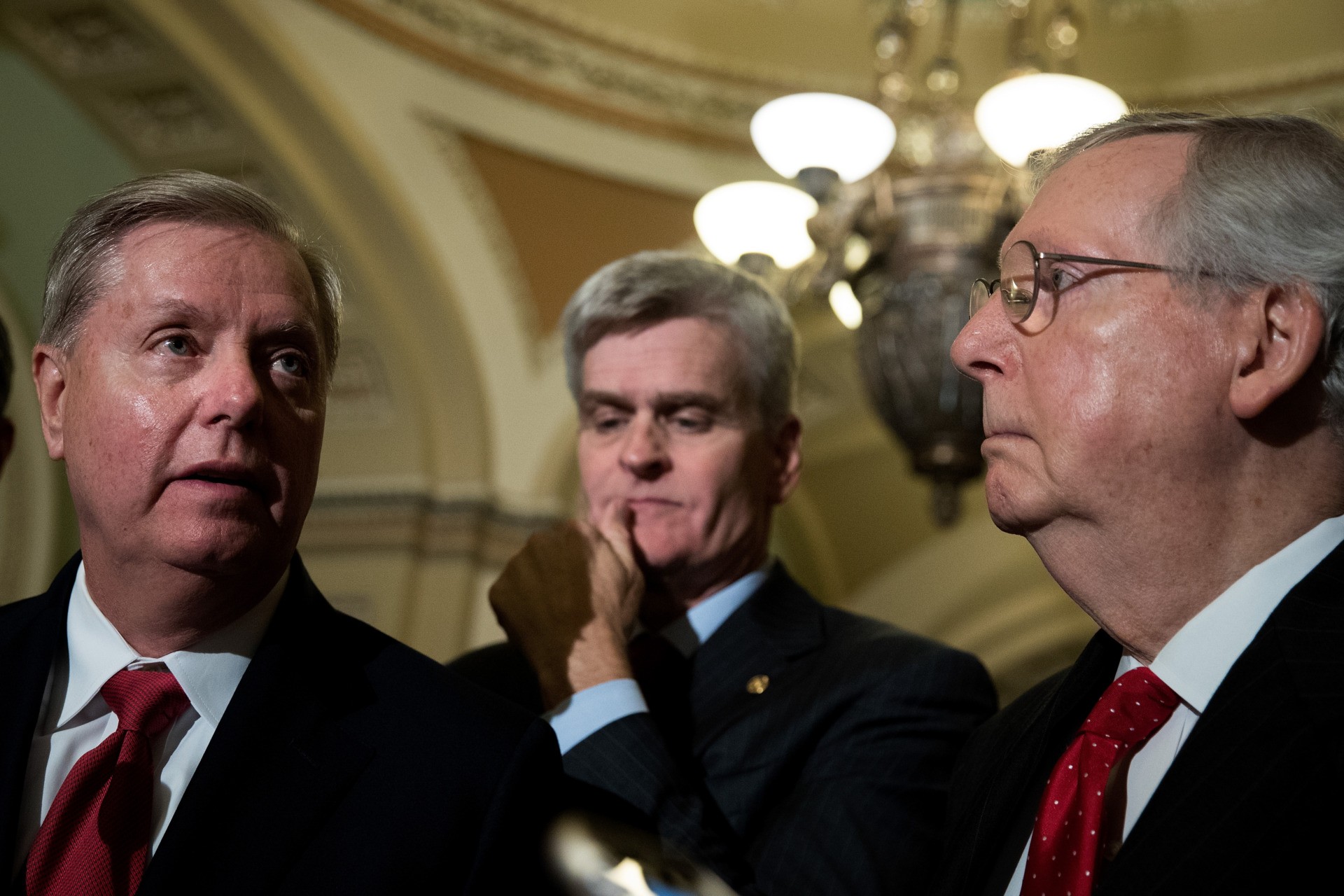 “And unlike the Republicans, they [the Democrats] stick together, although we have some great Republicans,” Trump said. “But we also have a group of Republicans, Romney, little Ben Sasse, you look at Louisiana that whole deal with him—so terrible. We have a group of Republicans, they don’t know what loyalty means. They don’t get it. Mitch McConnell is terrible. We have some that just can’t get there. And they never will. Look at the judges that they’re reporting. Look at the judges that they’re approving. And we have to get, unfortunately, Lindsey Graham is voting for all these horrible judges. But look at what’s happening, that’s impossible for the Democrats to do. McConnell can’t hold people in line. Are you seeing what’s going on with judges? Radical left judges are being approved because Lindsey’s voting for them. I can’t fathom it. I can’t fathom it. I’m a very loyal person. Nobody can understand what’s going on with that. But they’re getting people appointed that are that are very sad. It’s a very sad situation.” 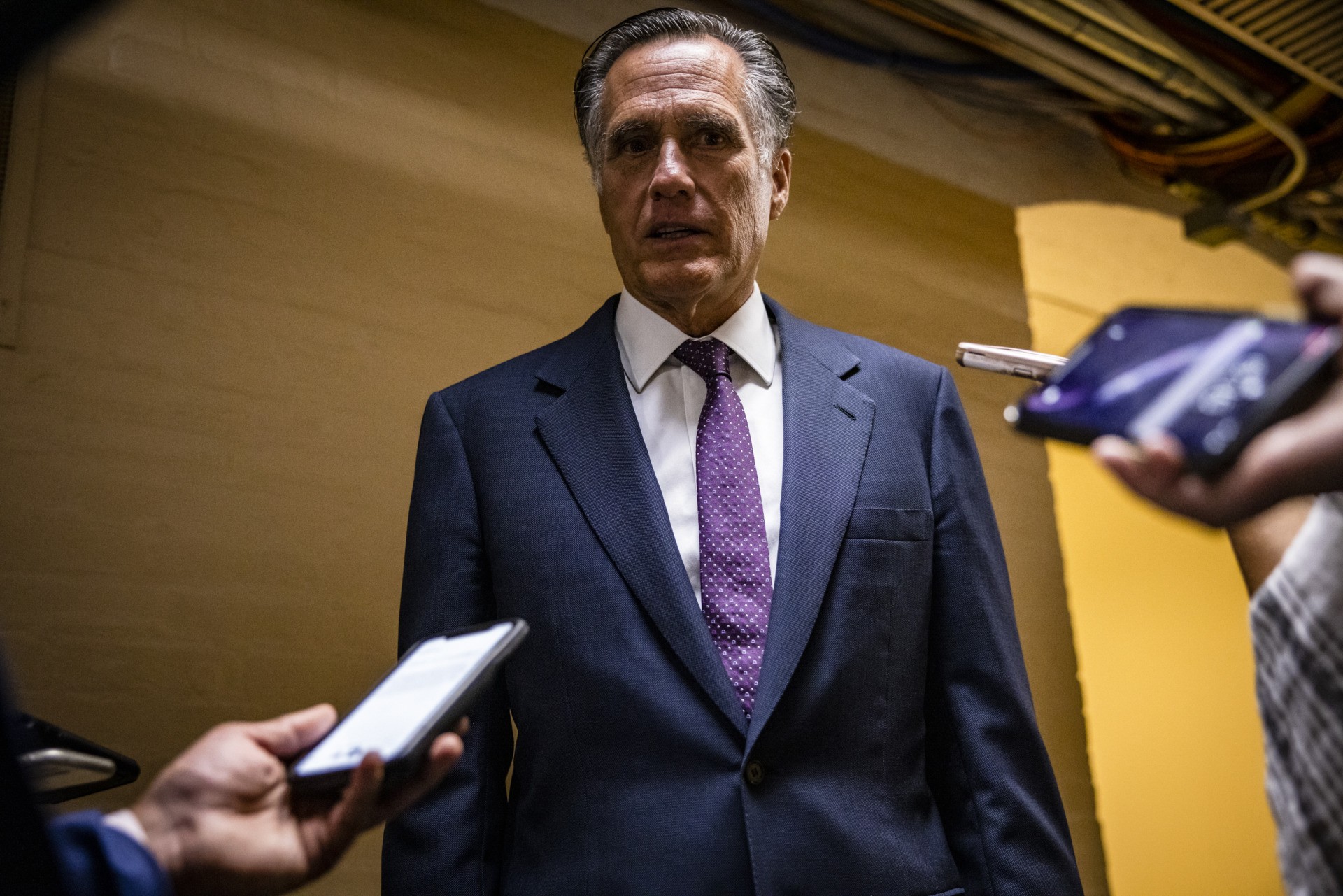 U.S. Sen. Mitt Romney (R-UT) talks to reporters after leaving a meeting between a group of bipartisan Senators in the basement of the U.S. Capitol Building. (Samuel Corum/Getty Images).

When asked about the 19 Republicans who voted for final passage of the Senate-passed $1.2 trillion “infrastructure” bill — the bill has some infrastructure in it, but as Breitbart News has reported, it is really filled with leftist policy priorities — Trump said those 19 Republican senators “should be ashamed of themselves.” He also said they got “duped” and McConnell “got out-played” by the Democrats as shortly after the Senate passed that bill, the Senate and then later the U.S. House of Representatives — both with slim Democrat majorities — adopted a budget resolution that will be used as a vehicle to eventually jam through a much broader leftist agenda branded again as “infrastructure.”

Overall, Trump said that this failure by establishment Republicans demonstrates the ineptitude of the GOP — arguing that even though the Democrats have “horrible policy” ideas, the fact they stick together means the only reason there even is a GOP at all is because of those failed policies from Democrats. If Democrats actually had positive policy solutions, in other words, their unity of purpose — as compared to Republican failure to remain focused and organized — Trump is arguing there would not even be a Republican Party.

Later in the interview, Trump again bashed McConnell calling him “the old crow” and saying he “would have lost” his Senate seat if he had not endorsed the GOP Senate leader — and then rattled off several other Republicans he says would have lost their elections without his endorsement including Sens. Dan Sullivan (R-AK), Joni Ernst (R-IA), Thom Tillis (R-NC), and Graham. 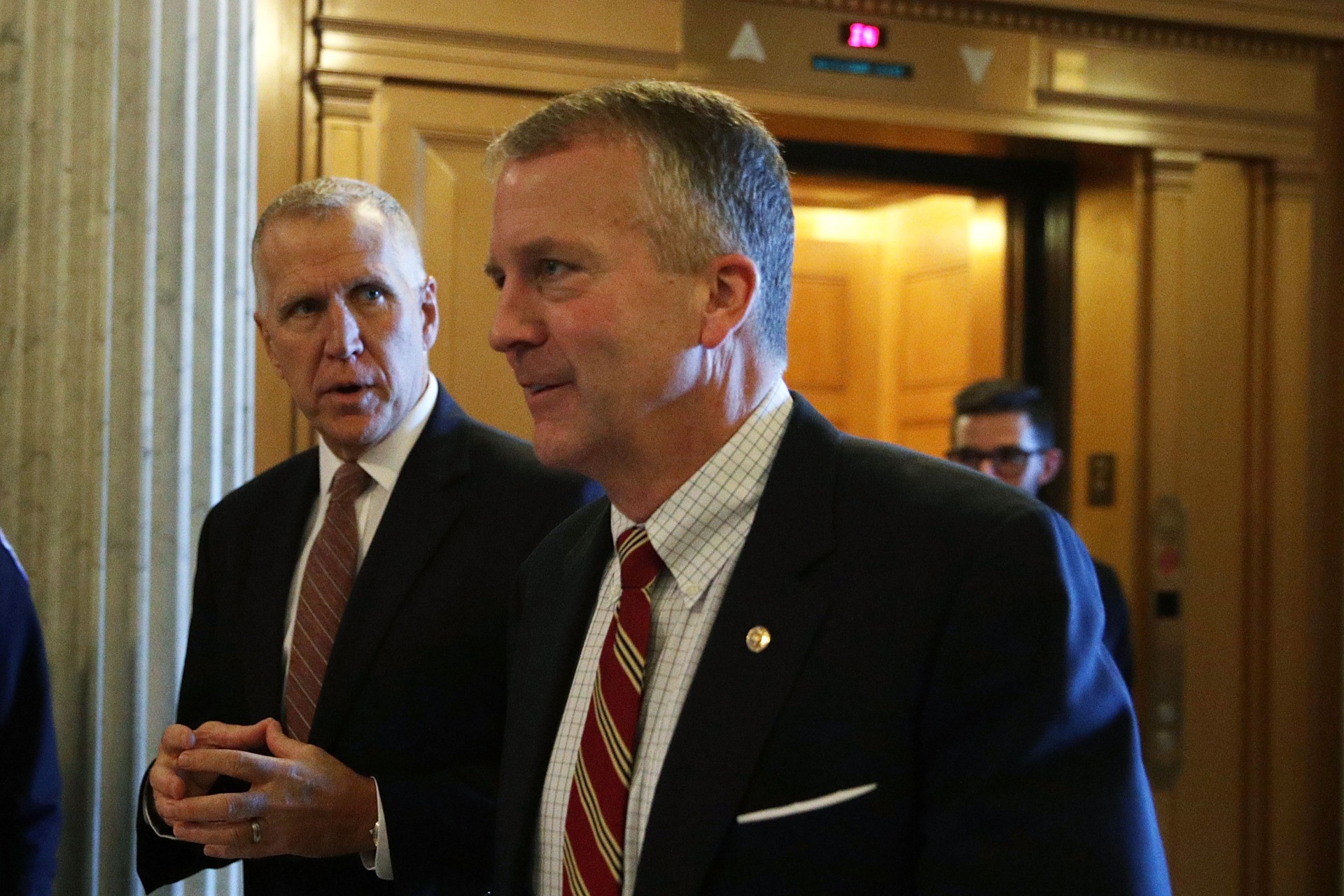 “They were all way down and then in the last week I got out and did teleconference calls — and in Joni’s case I did a rally in Iowa,” Trump said. “They all would have lost. I saved 10 people and I’m very happy I did. I’m very happy they’re great people. Lindsey Graham would have lost. I can name others. They won only because of me. Most of them admit it — Little Ben Sasse would have lost. Unfortunately, Lindsey Graham and Ted Cruz asked me to endorse him. As soon as he won the election, he got nasty again. It’s one of those things — he kissed my ass and then he won the election and then he got nasty again, little Ben Sasse.. He would have lost if I didn’t endorse him. Unfortunately I endorsed him. But I endorsed Mitch McConnell — he was down too, she [McConnell’s Democrat opponent Amy McGrath] had $93 million in the bank. [Lindsey Graham’s Democrat opponent Jaime Harrison] had $125 million. But she [McGrath] had $93 million and she was absolutely going to beat Mitch McConnell and he came to me and he asked me for help. I gave him the help and I gave him a strong statement, and then he goes and makes a horrible statement that frankly he never should have made. But Mitch McConnell was a sure loser — 100 percent. He was down two points and she hadn’t even spent her money yet. They like me in Kentucky, and I like the people of Kentucky — unfortunately I gave him my support and he won easily.” 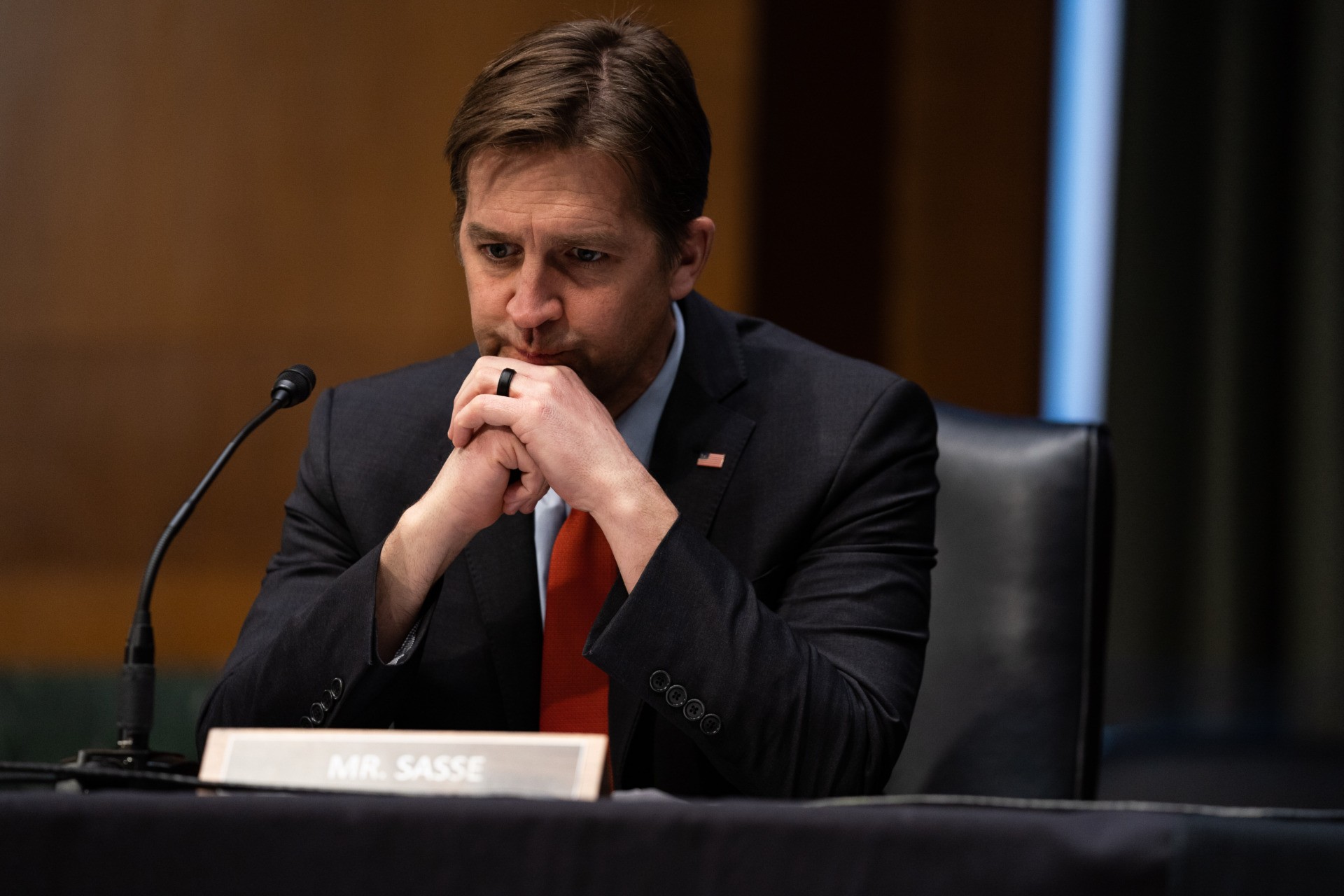 Trump even provided Breitbart News with a chart showing public polling in the Kentucky Senate race in 2020 from before he endorsed McConnell and after — showing Democrat McGrath leading McConnell before the Trump endorsement and Trump’s backing leading to a consistent lead and eventual victory for McConnell in November: 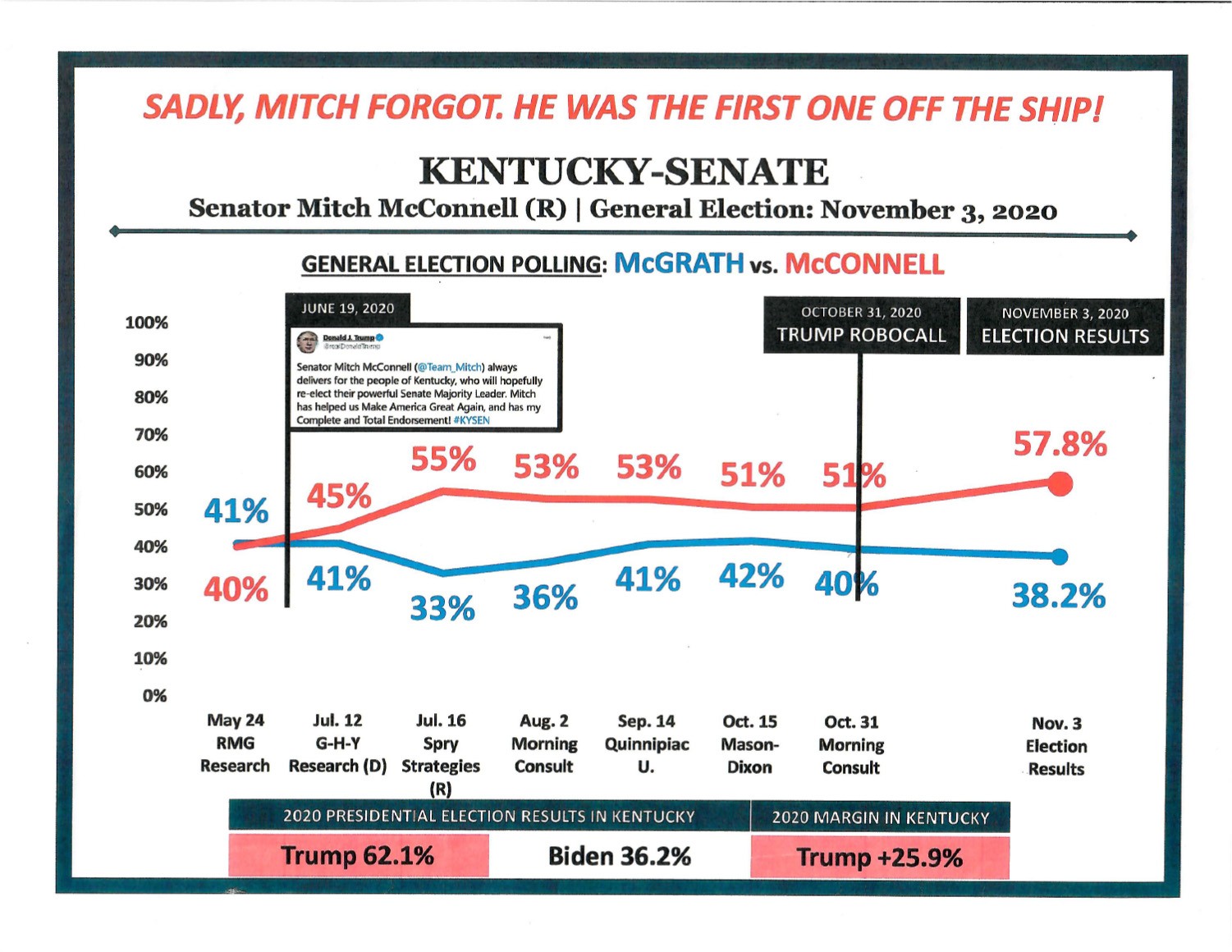 Trump added that with a few rare exceptions like the ones he named here, “I have very good relationships most” inside the Republican Party.

More from Trump’s exclusive interview with Breitbart News is forthcoming.