At least 12 U.S. troops were killed Thursday in Kabul, marking the largest single-day loss of life for American soldiers in Afghanistan in ten years.

“Two US officials say 11 Marines and a Navy medic were killed in the Afghanistan attacks,” the Associated Press reported Thursday afternoon.

Previously, the largest single-day loss of U.S. servicemen occurred while Joe Biden was vice president under Barack Obama. On August 6, 2011, a CH-47 Chinook helicopter carrying 30 American servicemen, including 22 Navy SEALs, was shot down by Taliban fighters with a rocket-propelled grenade. 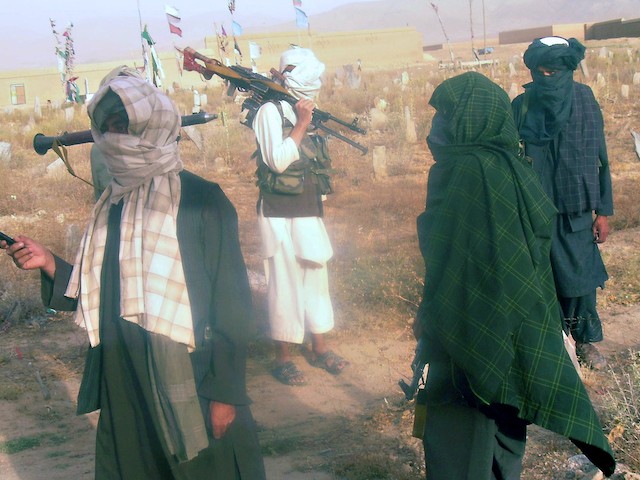 This photograph taken on August 10, 2011, shows fighters with Afghanistan’s Taliban militia standing at a cemetery, near the site where a CH-47 Chinook helicopter carrying U.S. troops crashed killing 38 personnel including 30 U.S. soldiers, at the remote Tangi Valley in Wardak province, west of Kabul. (STRDEL/AFP via Getty Images)

The suicide bombings on Thursday occurred outside of Kabul’s Hamid Karzai International Airport and the Baron Hotel attack. More than 60 Afghan civilians were also killed. Prior to the explosions, the Kabul Airport was in complete chaos as thousands of Americans, Afghans, and foreign nationals were attempting to flee the Taliban government.

President Biden has yet to make a public statement about the bombings.

#BREAKING: @JenGriffinFNC says the death toll of U.S. soldiers has increased to TWELVE — "11 Marines and one Navy medic. This is the largest death toll for U.S. servicemembers in this kind of attack in over a decade" with the last U.S. servicemember death being February 2020 pic.twitter.com/28f58py3km

“We thought this would happen sooner or later. Its tragic it’s happened today. It’s tragic to have this much loss of life,” Gen. Kenneth McKenzie said, according to NBC.

U.S. troops and NATO forces are using the airport for their evacuations. The Kabul airport has a single runway, and if it is destroyed, evacuation flights would no longer be able to land or take off. About 1,500 American citizens are still believed to be in Afghanistan. The withdrawal date for U.S. forces is August 31, less than one week away.