Republican Herschel Walker announced his campaign for U.S. Senate in Georgia on Wednesday with a video highlighting his small-town roots and reasons he subscribes to the conservative ideology.

The 59-year-old native Georgian, who had been mulling a Senate bid over the last several months and officially filed to run on Tuesday, flashed through scenes of his athletic past in his launch video as he described his values and life lessons learned.

“At my core, I’m a runner, but I wasn’t always fast,” Walker began. He said that during his formative years, he “learned about sacrificing the things you want in the moment for the future you know you can have if you work hard enough.”

I am just a kid from Wrightsville, Georgia, who has lived the American Dream. Now, I’m running as a Republican for the United States Senate to keep that dream alive for everybody. To join the fight, visit https://t.co/J4UbhIPvuU pic.twitter.com/e1ZX5PHdVY

Walker also said in a statement Wednesday that his own American dream story is driving him to “protect the American Dream for everybody” by pursuing a Senate bid. Walker grew up in a blue-collar family in Wrightsville and went on to become valedictorian of his high school and one of the most accomplished athletes in history as a University of Georgia running back, NFL player, and Olympian.

“Our country is at a crossroads, and I can’t sit on the sidelines anymore,” Walker stated. “America is the greatest country in the world, but too many politicians in Washington are afraid to say that.” He continued:

Where else could a poor kid from a small town in Georgia become valedictorian of his high school, earn the Heisman Trophy, play professional football, represent the United States in the Olympics, and become CEO of multiple companies? I have lived the American Dream, but I am concerned it is slipping away for many people.

In the United States Senate, I will stand up for conservative values and get our country moving in the right direction. It is time to have leaders in Washington who will fight to protect the American Dream for everybody.

Walker is one of a handful of Republican candidates — alongside Agriculture Commissioner Gary Black, Air Force veteran Kelvin King, and retired Navy SEAL Latham Saddler — who are vying to unseat Sen. Raphael Warnock (D-GA) in what is expected to be a highly competitive general election race and possible pickup opportunity for Republicans next year during midterms.

The former athlete is starting off in the primary with an advantage, having both the most recognizable name and the backing of former President Donald Trump, who as early as March was urging Walker to run for office. 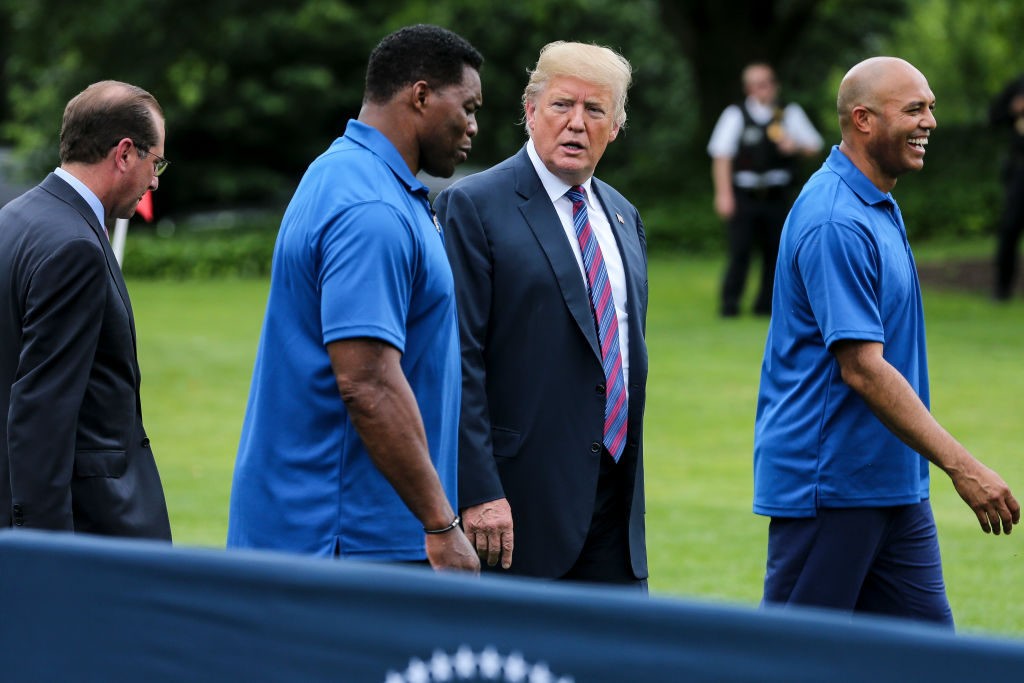 Upon announcing his campaign Wednesday, Walker also received an immediate endorsement from Rep. Buddy Carter (R-GA), who had been considering a run himself but held off on pursuing the Senate seat until Walker decided on his plans.

Carter stated Wednesday morning, “Herschel supports the America First agenda and has my complete endorsement, and I’ll do everything I can to ensure he has the opportunity to fight for our Georgia values in the United States Senate.”