The last known Jew in Afghanistan, Zebulon Simentov, reportedly decided to stay in the country last week despite the Taliban’s takeover of the country.

The 66-year-old Herat, Afghanistan, native is the caretaker of the last synagogue in Kabul, and he has spoken about his desire for peace and protection for religious minorities before.

Simentov initially told media he would move to Israel after the Jewish High Holiday season in September. In June, he told Voice of America, “God willing, I cannot say seven to eight months, but I will definitely leave by the time the Taliban come.”

The Tuesday after the Taliban takeover, “my team went to his home and he was packing,” Kahana said. He even said the Jewish prayer required before traveling. Suddenly, Simentov reportedly demanded $50,000 to leave Afghanistan.

"Taliban failed to convert me"

The caretaker of Kabul's only synagogue, Afghanistan's last Jew decides to stay on. @PriyankaSh25 gets you this report pic.twitter.com/MOjzWLVYBS

Simentov’s wife and daughters moved to Israel in 1998. The 66-year-old Herat native went with his family and spent two months in Israel, but returned to Afghanistan. He moved into the only Kabul synagogue, where he found Ishaq Levy, the only other Jew in the country at the time.

But their shared faith was not enough to bring Simentov and Levy together. Unable to get along, the two men began a yearslong feud that confounded even the ruling Taliban regime. Both Jews regularly denounced each other. As neighbors recall, Levy repeatedly said that he had converted to Islam and that Simentov did not want to accept this. He also said that his fellow Jew was the owner of a secret brothel where he sold alcohol. Simentov in turn accused Levy of practicing black magic, which is prohibited in both Judaism and Islam.

The Taliban arrested both in 1998, but released the men shortly thereafter, reportedly in response to their incessant arguing. The Taliban also took the synagogue’s fifteenth-century Torah scroll and likely sold it on the black market. 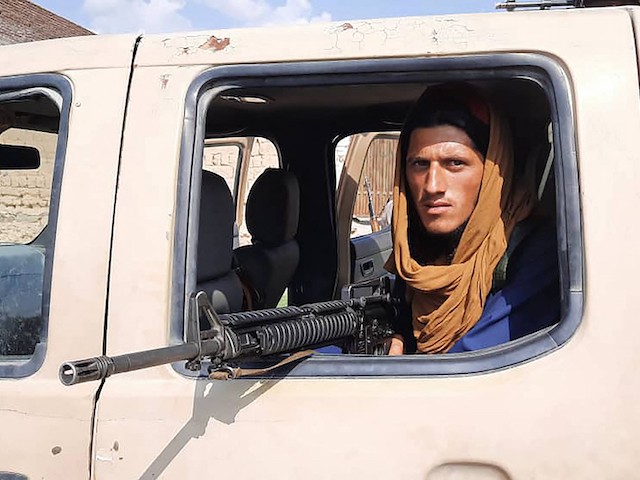 A Taliban fighter sits inside an Afghan National Army vehicle along the roadside in Laghman province on August 15, 2021. (AFP via Getty Images)

“I don’t talk to him, he’s the devil. A dog is better than him … I don’t have many complaints about the Taliban, but I have a lot of complaints about him,” Simentov told the New York Times in 2002.

Levy died in 2005 at the age of 80, the Jewish Telegraphic Agency reported.

A factor influencing his decision seems to be the fact he does not want to give his wife a get, a document required for a religious Jewish divorce. In 2011, Rabbi Pinchas Goldschmidt, president of the Conference of European Rabbis, offered to fly to Kabul to get him to write a get. Even after offering “a case of single malt scotch, the man refused,” Goldschmidt said.

Last year, Simentov spoke with Afghanistan’s Tolo News about peace talks between the Taliban and the now-defunct Afghan government. He said, “we [Afghans] are thirsting for peace, but first we want a ceasefire.” He also wanted any future political system in Afghanistan to protect the rights of religious minorities. 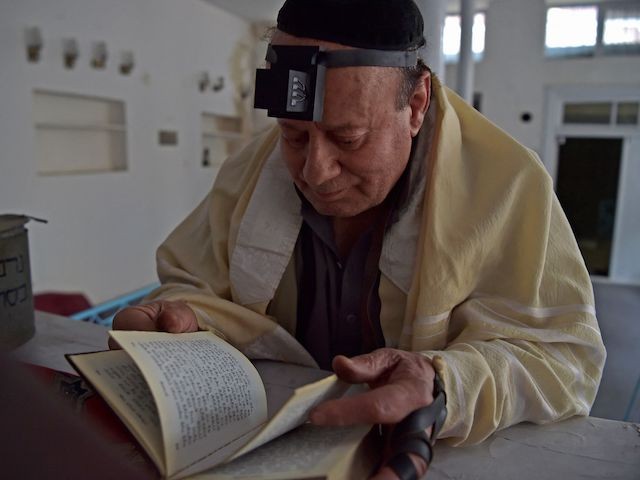 In this photograph taken on April 5, 2021, Afghan Jew Zebulon Simentov looks at the Torah scripture at the synagogue, housed in an old building in Kabul. (Wakil Kohsar/AFP via Getty Images)

Religious persecution is a deadly reality in Afghanistan. Christian organization Open Doors told Breitbart News Tuesday that Christians in Afghanistan are facing persecution rivaling North Korea. The Taliban reportedly began killing Christians found with Bibles on their phones after its takeover this week.

Shaheen continued, “There are Sikhs and Hindus in the country, and they have their religious freedom. People don’t need to fear and run away.”

“Christians are not the only religious minorities who are targeted. Sikhs are also persecuted but are considered less threatening because they are not known for sharing their faith,” Lamb said. “While they can still openly identify as Sikhs, they do experience plenty of hostility. Christians, however, must hide their faith or experience near-inevitable kidnapping, torture, and death.”

Shaheen claimed that he spoke to an Israeli network because he not realize he was doing so, complaining, “Some journalists maybe masquerading but I haven’t done interview with any one introducing himself he is from an Israeli media [sic].”

I do many interviews with journalists every day after the falling of provincial centers of Afghnistan and the capital Kabul to the Islamic Emirate, some journalists maybe masquerading but I haven’t done interview with any one introducing himself he is from an Israeli media.

Jews lived in Afghanistan for over 1,000 years. By the mid-nineteenth century, about 10,000 Jews lived throughout the country, according to the Museum of the Jewish People. Many moved after the formation of the state of Israel in 1948, followed by the Soviet Invasion and subsequent Taliban takeover.