Former football star Herschel Walker filed paperwork Tuesday to run for U.S. Senate in Georgia, setting him up for a potential challenge next year against Sen. Raphael Warnock (D-GA) in the contentious battleground state.

Walker, a University of Georgia football legend who went on to play in the NFL for more than a decade, had been considering a bid for months while living in Texas. On Monday, a report from the Atlanta Journal-Constitution that Walker had just registered to vote in the Peach State — under an address in the Buckhead neighborhood of Atlanta — provided a strong indicator that he may be preparing to launch his campaign.

Although former President Donald Trump has not officially endorsed Walker, Trump wrote in a statement in March, “Wouldn’t it be fantastic if the legendary Herschel Walker ran for the United States Senate in Georgia? He would be unstoppable, just like he was when he played for the Georgia Bulldogs, and in the NFL. He is also a GREAT person. Run Herschel, run!” 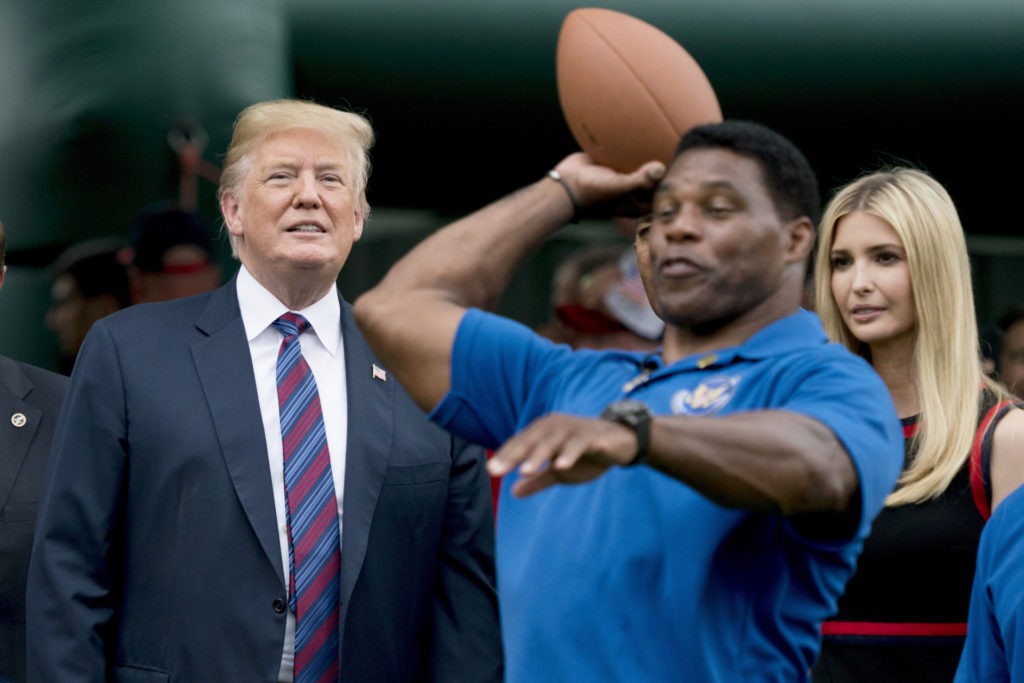 In this May 29, 2018 file photo, President Donald Trump and his daughter Ivanka Trump watch as former football player Herschel Walker throws footballs during White House Sports and Fitness Day on the South Lawn of the White House in Washington. (AP Photo/Andrew Harnik)

The former president also said in June during an appearance on the Clay Travis and Buck Sexton Show that he had just had dinner with Walker and that he thought Walker would run. “Beating him would be very tough,” Trump said.

The Georgia Senate race is expected to be one of the few serious pickup opportunities Republicans have next year in their quest to take back the Senate majority. Warnock, who is finishing out the term of former Sen. Johnny Isakson (R-GA), has proven to be a formidable candidate. The Georgia Democrat defeated former Sen. Kelly Loeffler (R-GA) in an upset during the January runoffs, and Open Secrets reported on Warnock’s “war chest” of campaign funds, recording that he has raised $32 million ahead of next year’s race.

Black issued a statement in response to the news about Walker’s candidacy, saying while holding a football, “Herschel, welcome back to Georgia. … You know, I’ve been a big fan of yours since we were in college together. … I suppose I’ve always wanted an autograph but there are some things that are far more important now, the future of our country, the future of our families”:

Welcome back from life in Texas, @HerschelWalker. While you get reacquainted with life in our state, I'm ready to discuss the issues anytime, anywhere. #gapol #gasen pic.twitter.com/tkjyljv7M8

Walker could not immediately be reached for comment, but he is expected to issue a public announcement about his candidacy in the coming days.