“Think about this for a second. The FRENCH are going into Afghanistan to rescue their citizens, while our Commander-in-Chief defers to the Taliban in the *hopes* that American citizens can get out safely,” McCarthy said in a Facebook post on Tuesday. “Joe Biden is keeping the world’s greatest military force on the sidelines.”:

Think about this for a second. The FRENCH are going into Afghanistan to rescue their citizens, while our…

McCarthy noted how the French, often referred to comically in the U.S. for their history of war surrenders, are quicker to rescue their own citizens from Afghanistan than Biden is. Thousands of Americans remain trapped in Kabul and are attempting to get to the airport as Taliban terrorists establish full control of Afghanistan.

An internal government document shows that there have only been 3,376 U.S. citizens airlifted out of Kabul, Afghanistan, as of Saturday, even though tens of thousands are estimated to still be trapped in the country, according to a report from Yahoo News. Pentagon press secretary John Kirby, National Security Advisor Jake Sullivan, State Department spokesman Ned Price have all declined to publicly give specifics about how many Americans have been rescued so far. 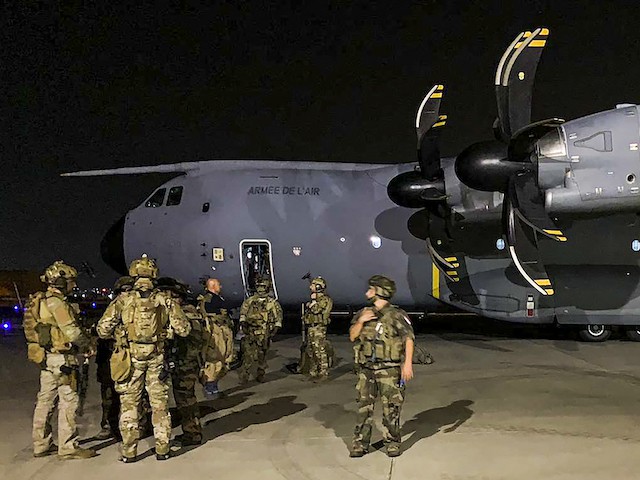 French special forces soldiers stand guard near a military plane at the airport in Kabul on August 17, 2021, as they arrive to evacuate French nationals after the Taliban’s military takeover of Afghanistan. (STR/AFP via Getty Images)

White House press secretary Jen Psaki on Monday scoffed at Fox News reporter Peter Doocy’s use of the term “stranded” on Monday to describe Americans who are, in fact, at risk of being stranded in Afghanistan. The Afghanistan Embassy is currently advising Americans not to come to the airport in Kabul unless they have received specific instructions to do so.

“I think it’s irresponsible to say Americans are stranded,” said White House press secretary Jen Psaki. “They are not. We are committed to bringing Americans who want to come home, home.”

Staff members at the U.S. Embassy in Kabul, Afghanistan, have expressed anger and betrayal over the government’s evacuation efforts, according to a cable obtained by NBC News detailing the lack of protection for U.S. Embassy staff members making their way to Kabul airport for evacuation.

Biden’s response to the withdrawal from Afghanistan has widely been criticized as a failure. The president himself has repeatedly attempted to shift the narrative to an argument of whether the U.S. should have remained in Afghanistan — even though the public is clearly upset with how the withdrawal went down, not the concept itself. 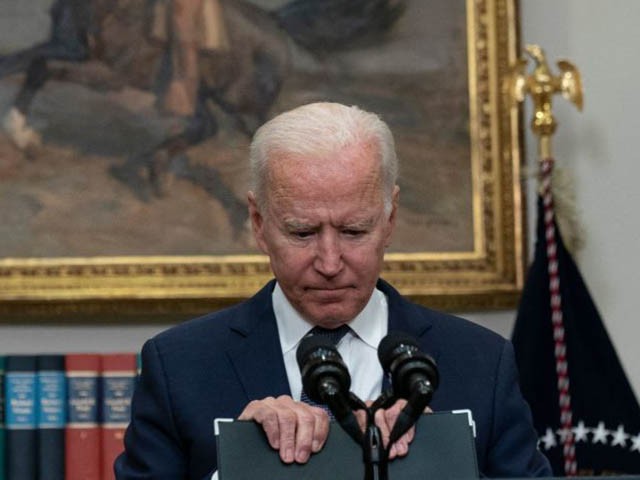 President Joe Biden speaks during an update on the situation in Afghanistan and the effects of Tropical Storm Henri in the Roosevelt Room of the White House in Washington, DC, on August 22, 2021. (Andrew Caballero-Reynolds/AFP via Getty Images)

The Central Intelligence Agency (CIA) ultimately negotiated with terrorists on Monday by holding a secret meeting in Kabul with the Taliban’s de facto leader, Abdul Ghani Baradar. According to the Washington Post, the CIA would not comment on what was discussed in the meeting, although it was “likely to have involved an impending Aug. 31 deadline for the U.S. military to conclude its airlift of U.S. citizens and Afghan allies.”

House Intelligence Committee Chair Rep. Adam Schiff (D-CA) on Monday said it is “very unlikely” evacuations in Afghanistan will be over by August 31 due to the overwhelming number of Americans, Afghan allies, and potential refugees who have yet to be evacuated. The Taliban has threatened “consequences” if the U.S. crosses a “red line” by keeping troops in Afghanistan past August 31.

“The only proper response from America to these dirty savage terrorists should be: Go f*** yourself,” Rep. Dan Crenshaw, who is a Navy SEAL veteran, tweeted in response to Taliban threats on Monday:

The only proper response from America to these dirty savage terrorists should be:

World leaders have made their displeasure clear at Biden’s lack of global engagement and have demanded he revises his withdrawal date to ensure no one is left behind. Ongoing “summary executions,” torture, rape, and repression of Taliban opposition were cited by the U.N. on Tuesday as evidence of what lies ahead for Afghanistan as President Biden presses ahead with plans to withdraw U.S. forces.