Georgia Gov. Brian Kemp (R) wants the Biden administration to first prioritize evacuating American citizens from Taliban-controlled Afghanistan and then focus on protecting the Afghan allies who specifically “protected our troops” and saved American lives during the past 20 years, the governor told Breitbart News in an exclusive interview Monday.

The governor pointed to the Atlanta Journal-Constitution, Georgia’s largest newspaper, as the origin of the misleading news after it published an article last week titled “Georgia gov open to accepting Afghanistan refugees after Taliban takeover.”

“It’s unfortunate that some really fed off a statement I didn’t make just because it was an Atlanta headline in the paper here who’s no friend of ours,” he said. Kemp’s statement in the AJC article was brief and noted the importance of keeping those “who partnered with American armed forces over the last 20 years safe from harm.”

The reports characterizing Kemp as being “open to accepting” refugees in Georgia spread rapidly and were met with brutal accusations by those concerned about the refugee resettlement process. Newsmax’s Emerald Robinson wrote, “Of course Gov. Brian Kemp wants to relocate the Taliban to Georgia,” while former state Rep. Vernon Jones, who is challenging Kemp for governor next year, stated, “Letting these unvetted & unCovid-Tested TALIBAN into our state is not the move of a true leader.”

In reality, governors have little say over Afghans arriving in America. Vetting and resettlement falls under the purview of the federal government, which outsources nine contractors to manage the resettlement process. The Pentagon noted Fort Lee in Virginia, Fort McCoy in Wisconsin, Fort Bliss in Texas, and McGuire Air Force Base in New Jersey will all temporarily host Afghans before they are released to other regions of the U.S. 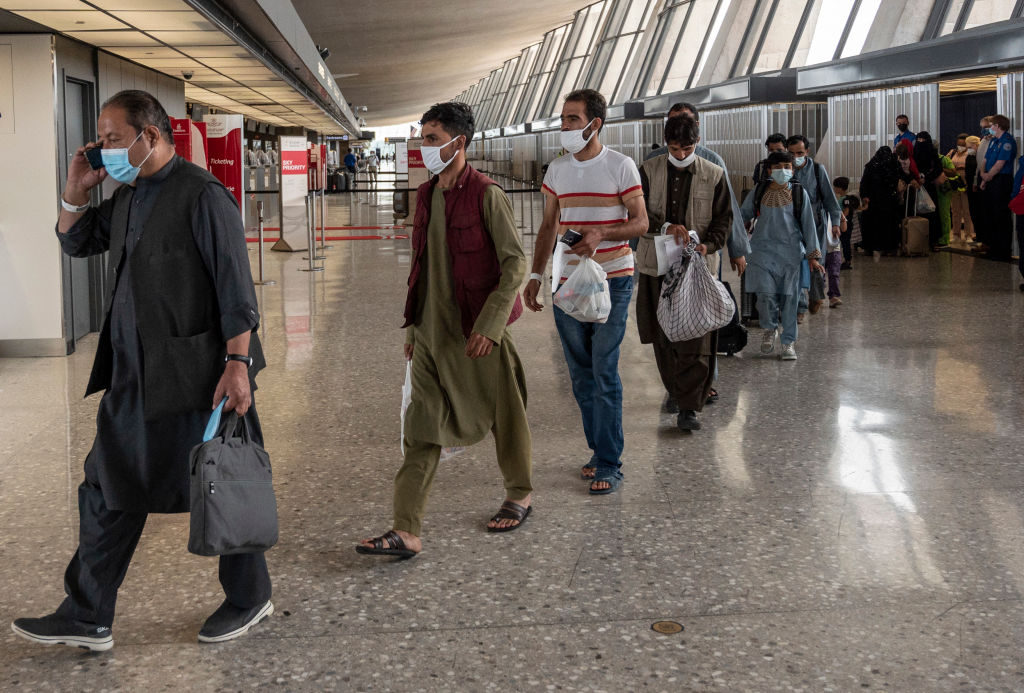 Refugees from Afghanistan are escorted to a waiting bus after arriving and being processed at Dulles International Airport in Dulles, Virginia, on August 23, 2021. (ANDREW CABALLERO-REYNOLDS/AFP via Getty Images)

On Saturday, the Pentagon insisted during a press briefing that proper screening of Afghans is taking place, claiming, “Intelligence, law enforcement, and counterterrorism professionals are conducting screening and security vetting for all SIV [special immigrant visa] and others, vulnerable Afghans, before they are allowed to enter into the United States.” 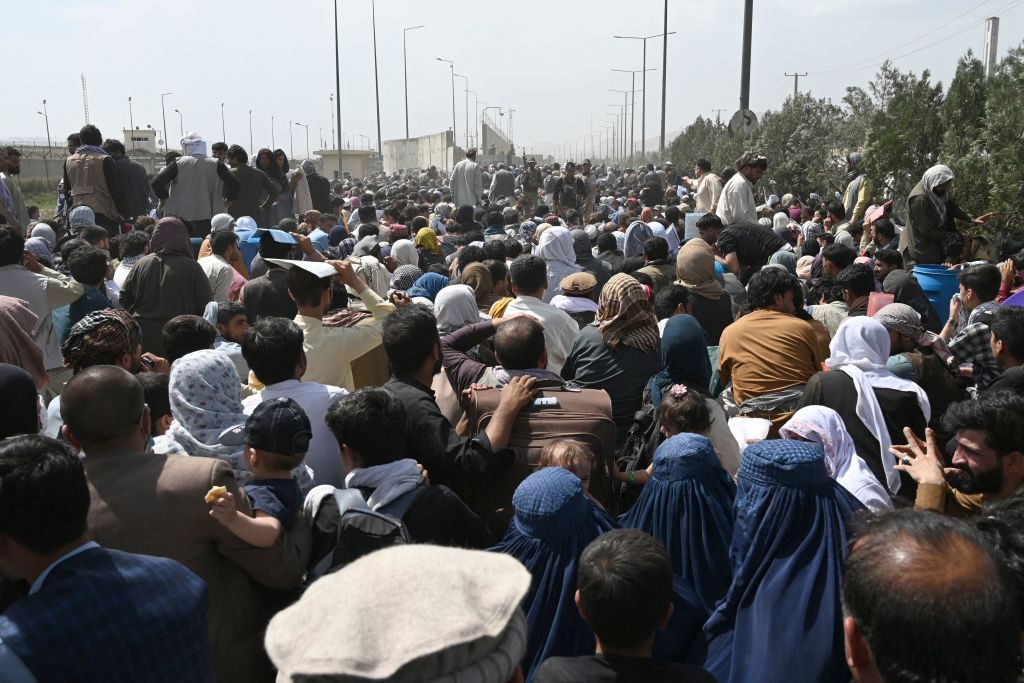 Afghans gather on a roadside near the military part of the airport in Kabul on August 20, 2021, hoping to flee from the country. (WAKIL KOHSAR/AFP via Getty Images)

Aside from the refugees, concerns have grown for the American citizens left in Afghanistan as the U.S. continues its evacuation effort from within the confines of the Kabul airport. Amid reports of violent and tense encounters with Taliban forces outside the airport, the U.S. Embassy in Afghanistan has discouraged American citizens remaining in the country from traveling to the airport unless they have been individually instructed to do so.

The Pentagon said during its briefing Saturday it had evacuated 2,500 American citizens out of as many as 15,000 left in the country. Biden had previously confirmed up to 15,000 were left in Afghanistan in an ABC interview last week.

Kemp shared his concern, first and foremost, for the Americans in Afghanistan, saying, “My belief is that we need to get every American out of there first and immediately.” He said the next priority should be for the U.S. government to evacuate the Afghan allies who aided U.S. troops, including members of the Georgia National Guard, who were stationed in the country during the past 20 years.

“Number two, we absolutely need to protect those that have protected our troops, many of our Georgia National Guard and other Georgia military that served more than one tour of duty in Afghanistan, and I’ve spoken with our adjutant general, the head of our Georgia National Guard, Gen. Tom Carden, and then our insurance commissioner, Gen. John King,” Kemp explained. “Both of them have done multiple tours in Afghanistan. I mean they are frantically trying to help people that literally saved them and their troops’ lives over there. And look, those people, we should take care of them.”

The Georgia Republican said he believes the U.S. should seek to protect those allies from the threat of Taliban persecution, clarifying he wants to see protection for “interpreters, government workers, and informants that have aided the U.S. military.”

The U.S. began its evacuation mission out of the airport after Taliban forces surged through the country and seized control of Kabul just over one week ago. The swift collapse of Afghanistan’s government came after Biden pulled the U.S. from Bagram Airfield, its largest station there, in July and set a troop withdrawal date for the end of August. Despite reports that the Taliban was making new advances in the country, the president expressed confidence to the American public in July that a Taliban takeover was “highly unlikely.”

Kemp asserted, “It’s a failure by the Biden administration on lack of planning, and we need to get our folks out of there, but we also need to protect those that have literally saved American lives and saved Georgia lives of our National Guard and military folks that are over there. I mean, if we don’t do that, nobody’s ever going to stand with us again in another foreign conflict.”

The governor emphasized his concern for diligently checking the backgrounds of those fleeing to the U.S. from Afghanistan, a dangerous country plagued with unrest, violence, terrorism, and coronavirus.

“They absolutely need to be thoroughly vetted, and I would certainly call on our members of Congress, on the conservative Republican side, to make sure that they understand what those processes are,” Kemp said. “I know if that ends up happening at some point here in Georgia, we’re going to be demanding answers to know what the vetting process was and make sure they’re being handled properly.”