President Joe Biden’s administration has started its fast-tracking of Afghans into the United States as reports indicate arrivals have begun in Virginia, Missouri, South Carolina, and Connecticut.

In the last few days, hundreds of Afghans have arrived at Dulles International Airport in Loudon County and Fairfax County, Virginia, for permanent resettlement in the U.S. Some Afghans said they plan to move to Texas or California.

Although some Afghans attempting to flee the Taliban have not yet made it out of Afghanistan, others did make it out and have been arriving in the U.S., including Dulles Airport. [Emphasis added]

Several people told us they were only staying in the DC area temporarily until they can move to places like Texas and California. But local groups are helping others who plan to stay in the area for a while. [Emphasis added]

In addition, Afghans have arrived in St. Louis, Missouri, according to the St. Louis Post-Dispatch. Local officials have suggested that more than 1,000 Afghans could be resettled in the St. Louis area when all is said and done.

Afghans are also arriving in New Haven, Connecticut, where refugee contractors are working to permanently resettle them after their arrival on buses, the Connecticut Mirror reports:

Noorullah, who asked to be identified by only his first name due to security concerns, said they had boarded one of the last commercial flights out of Kabul on Sunday morning — the same day Taliban fighters swept into the city, putting an end to the Afghan government and spreading panic among civilians. [Emphasis added]

Unlike many left in Afghanistan, Noorullah was able to travel thanks to his U.S. Special Immigration Visa (SIV) granted to him earlier this year. He applied for it in 2017. Around three years is the average wait time for an SIV approval, but as many find themselves in Noorullah’s situation hoping for a way out, refugee organizations are calling on the U.S. to speed up the process. There are more than 18,000 applications in the pipeline, according to the International Rescue Committee. [Emphasis added]

Similarly, Afghans are being resettled in South Carolina with the help of refugee contractors after boarding planes and fleeing Afghanistan.

Bedrija Jazic, director of Refugee and Immigrant Services for Lutheran Services Carolinas, which is one of two nonprofits primarily involved in refugee resettlements in the state, said a family of six arrived in the Columbia area a week or two ago. [Emphasis added]

A separate family of five that recently arrived is at Fort Lee in Virginia going through processing, including for medical needs and COVID-19 screenings, ahead of being resettled in South Carolina, she added. [Emphasis added]

Other cities like El Paso, Texas; Akron, Ohio; Seattle and Tacoma, Washington; Sparta and Tomah, Wisconsin; and Salt Lake City, Utah, are expecting to have Afghans resettled in the areas thanks to local refugee contractors.

On Monday, Pentagon officials said up to 22,000 Afghans would be resettled across the U.S. as the Armed Forces began withdrawing from Afghanistan. Days later, though, Biden hugely increased the number, suggesting in an interview that up to 65,000 Afghans had to be evacuated from Afghanistan.

Refugee contractors state that the total number of Afghans that ought to be resettled in the U.S. is closer to from 80,000 to more than 300,000. Those arriving in the U.S. are expected to first be taken to Fort Lee in Virginia, Fort Bliss in Texas, and Fort McCoy in Wisconsin, where they are tested for the Chinese coronavirus. 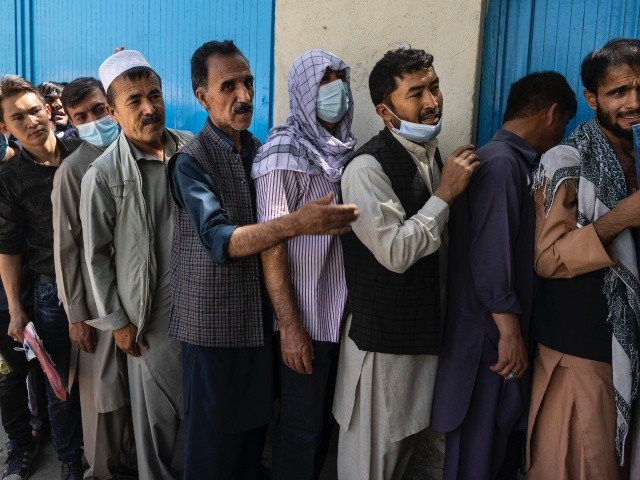 Afghans wait in long lines for hours at the passport office as many are desperate to have their travel documents ready to go on August 14, 2021 in Kabul, Afghanistan. (Paula Bronstein /Getty Images)

Biden waived the requirement that Afghans be tested for coronavirus before they board planes to the U.S. Elected Republicans and Democrats allowed the administration to make such changes with only 46 House Republicans opposing the move.

Already, at least ten Republican governors have joined Democrat governors in their requests for the Biden administration to resettle Afghans in their states. States, counties, and local communities no longer have veto power over refugee resettlement after Biden canceled former President Trump’s executive order that granted such powers.