A registered nurse in San Diego blasted policies requiring healthcare workers to get the vaccine in order to keep their jobs during a County Board of Supervisors meeting this week, revealing she quit her job as a result of the mandate and adding that politicians are single-handedly creating a healthcare crisis.

The registered nurse, identified as Heather, blasted the Board of Supervisors during the meeting and revealed she resigned from her job this week “because of this state mandate to be vaccinated.”

“I was no problem working in the healthcare system over the last 18 months without a vaccine. But now, all of the sudden, I’m a threat to public health? Tell me where this makes sense,” she began.

“All of you sitting up here with your masks on, you know that those masks don’t do anything,” she said, gesturing toward the Board of Supervisors.

“As a healthcare provider, we are taught how to use PPE. We’re taught universal precautions, and we know how to implement them when we’re dealing with patients who have a viral infection,” she continued. “I don’t understand how you guys don’t see the bigger picture here.” 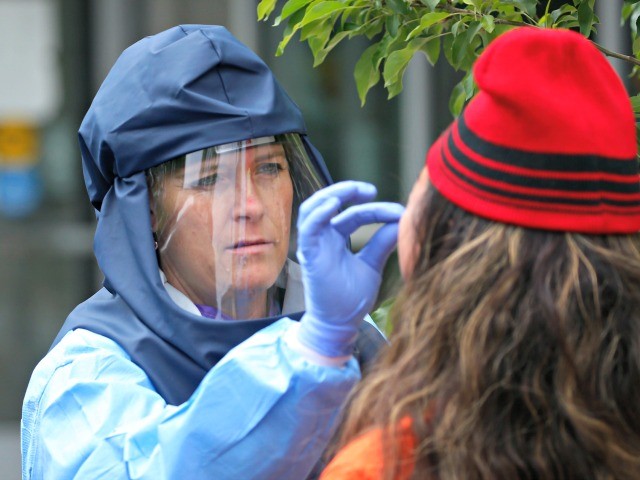 “What you’re doing is you’re creating a healthcare crisis,” the nurse declared, noting that America is already seeing a nursing shortage across the country.

“So now, in San Diego County, I know for a fact there’s several hospitals that are operating an all bed crisis. [Do] you know why we’re doing that? … Because we have a nursing shortage, and you know that,” she said.

“These numbers are skewered. The testing is skewered. This needs to stop. I don’t understand,” she continued before blasting one of the supervisors for refusing to look at her as she spoke.

California was the first state in the country to mandate vaccines for healthcare workers. The California Department of Public Health made the announcement this month, and Dr. Tomás J. Aragón, California’s public health officer, issued the order forcing healthcare workers to get vaccinated. They have until September 30 to complete the vaccination series.

“As we respond to the dramatic increase in cases, all health care workers must be vaccinated to reduce the chance of transmission to vulnerable populations,” the August 5 order reads.

Exceptions are limited, granted only on the grounds of religious beliefs or a qualifying medical reason. Those who are granted an exemption will be subjected to government testing at least once a week and must wear a mask.

Other states, including New York and Maine, have followed suit, triggering similar protests against the vaccine mandates.

Members of ReOpen San Diego, Let Them Breathe, and San Diego Rise Up held a rally outside of the County Board of Supervisors meeting this week and demanded the government to refrain from forcing businesses to require individuals to provide proof of vaccination.

According to KUSI, “hundreds” of businesses have signed a Business Equality Pledge, vowing not to discriminate against unvaccinated individuals.

“Citizens are also signing a petition to refuse to comply with these arbitrary and unconstitutional requirements. The rally attendees are not anti-vax, but they are simply against all medical mandates,” KUSI added.

Re-Open San Diego co-organizer Amy Reichert is among several activists who delivered a speech to the Board of Supervisors over the vaccine requirements, sending a pointed message.

“I actually work for a big corporation, and my CEO has a message for you, he’s not going to do it. Go pound sand [Chair] Nathan Fletcher,” she said to cheers:

"I actually work for a big corporation, and my CEO has a message for you, he's not going to do it. Go pound sand @NathanFletcher."