Former Israeli Prime Minister Benjamin Netanyahu revealed on Wednesday that he had refused an offer from then-President Barack Obama’s Secretary of State John Kerry to adopt the now-failed “Afghanistan model,” which entailed relying upon Palestinian forces to counter terrorists.

In a lengthy Hebrew post, Netanyahu revealed that Kerry, who currently serves as the first U.S. Special Presidential Envoy for Climate, sought to convince him of the efficacy of the model the U.S had adopted in Afghanistan.

“In 2013, I was approached by the then US Secretary of State, John Kerry who invited me on a secret visit to Afghanistan to see, he said, how the United States had set up a local military force that could stand alone against terrorism,” he said.

“The message was clear — the ‘Afghanistan model’ is the model that the United States seeks to apply to the Palestinian situation as well,” he added.

But Netanyahu claimed to have “politely declined” to entertain the notion.

“I politely declined the offer and objected to the very idea,” he said.

“I estimated then that as soon as the United States left Afghanistan, everything would collapse. This is unfortunately what has happened these days: an extremist Islamic regime has conquered Afghanistan and will turn it into a state of terror that will endanger world peace,” he added. 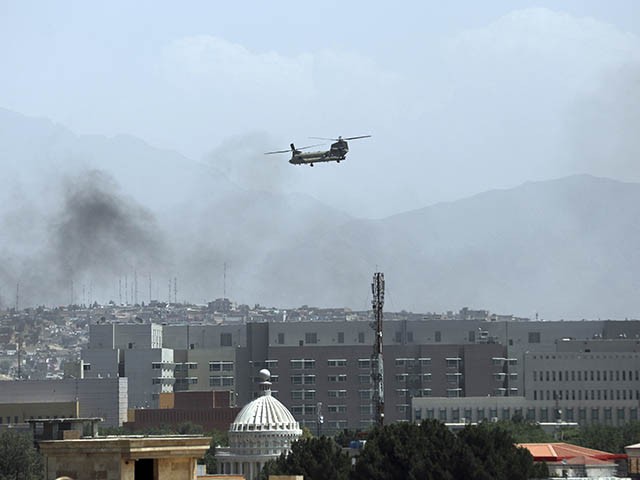 A U.S. Chinook helicopter flies over the city of Kabul, Afghanistan, Sunday, Aug. 15, 2021. Taliban fighters entered the outskirts of the Afghan capital on Sunday, further tightening their grip on the country as panicked workers fled government offices and helicopters landed at the U.S. Embassy. (AP Photo/Rahmat Gul)

Netanyahu suggested that an identical result would behold Israel if territory was relinquished to Palestinian control.

“We will get the same result if, God forbid, we hand over our homeland to the Palestinians,” he said. “The Palestinians will not establish Singapore. They will establish a state of terror in Judea and Samaria [the West Bank], a short distance from Ben Gurion Airport, Tel Aviv, Kfar Saba and Netanya.”

The current opposition leader also criticized a similar “wrong” foreign policy with regard to the Islamic Republic of Iran.

“We have seen the same wrong policy with regard to Iran,” he said. “The international community has embarked on a dangerous agreement that would have given Iran an internationally approved arsenal of nuclear bombs intended for our destruction.”

Claiming he was told to accept the American position, Netanyahu refused.

“I was then asked by our friends to keep quiet [and] not to act or fight [against it],” he said. “I did not agree to that either,” noting that he had taken offense to the policy.

Netanyahu also boasted of having actively opposed “the whole world,” even speaking in the U.S. Congress against the “dangerous” Iran deal.

“In the end, we caused the United States to impose heavy economic sanctions on Iran and to withdraw from the nuclear deal,” he said. “Were it not for our determined actions Iran would have long ago possessed an arsenal of nuclear bombs.”

The former prime minister concluded that Israel must learn to defend and rely on itself.

“The conclusion is clear: the right doctrine is that which I have led, that we must not trust others to keep us safe [and that] we must defend ourselves on our own in the face of any threat,” he said.

In 2014, Israel’s Defense Minister lashed out at Kerry — who had sought to push Israelis and Palestinians towards an elusive peace deal after decades of conflict — saying a security plan he presented was “not worth the paper it was written on.” 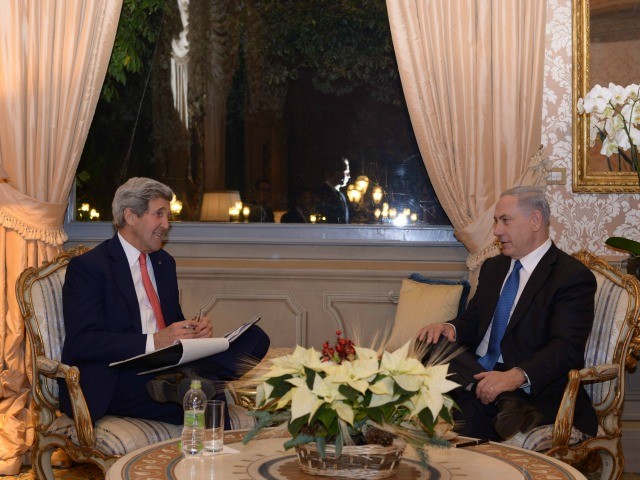 “The American plan for security arrangements that was shown to us … provides neither security nor peace,” Moshe Yaalon was quoted as saying.

Last year, a video depicting a confident Kerry lecturing on the impossibilities of achieving that which the Trump administration did resurface, dealing yet another blow to Kerry and the Democratic establishment’s long-held foreign policy doctrines.

In the clip, then-Secretary of State Kerry was seen bashing the notion that peace between Israel and Arab states could ever be achieved without first solving the Palestinian conflict.

Yet, in September, Netanyahu joined leaders from Bahrain and the United Arab Emirates in an epic ceremony, signing peace agreements and effectively normalizing relations between the nations, as the Trump administration brokered two major Middle East agreements in a matter of weeks.

Contrary to Kerry’s declarations, the peace agreements were achieved without the need for any Israeli concessions or on the conditioning of Palestinian statehood.

On Monday, the U.S.-designated Hamas terrorist group congratulated the Taliban and Afghan people for “defeating” America.

Taliban fighters pose for photograph in Wazir Akbar Khan in the city of Kabul, Afghanistan, Wednesday, Aug. 18, 2021. The Taliban declared an “amnesty” across Afghanistan and urged women to join their government Tuesday, seeking to convince a wary population that they have changed a day after deadly chaos gripped the main airport as desperate crowds tried to flee the country. (AP Photo/Rahmat Gul)

“We congratulate the Muslim Afghan people for the defeat of the American occupation on all Afghan lands, and we congratulate the Taliban movement and its brave leadership on this victory, which culminated its long struggle over the past 20 years,” Hamas said in a statement.

The Gaza-ruling Islamic terror group also stated that “the demise of the American occupation and its allies proves that the resistance of the peoples, foremost of which is our struggling Palestinian people, will achieve victory.”