In a 13-0 vote, the Los Angeles City Council voted on Wednesday to require city employees, except those with medical or religious exemptions, to be vaccinated for coronavirus by early October.

The Los Angeles Times reported on the development, including that the city is pressuring people to get vaccinated:

“It would not allow L.A. municipal employees to simply opt for testing if they wish to avoid getting vaccinated for other reasons, because “the city’s goal is to have a vaccinated workforce,” the proposal states.

“How can we ask Angelenos to be vaccinated if we are not doing it ourselves?” said City Council President Nury Martinez. “We need to set the strong example for our communities. The vaccines are available; they’re effective; and they are keeping people out of the hospital and off ventilators.” She added: “We cannot, and will not, be held back by those who do not want to get vaccinated.”

“There will be repercussions that could include ending your employment,” Harris said. 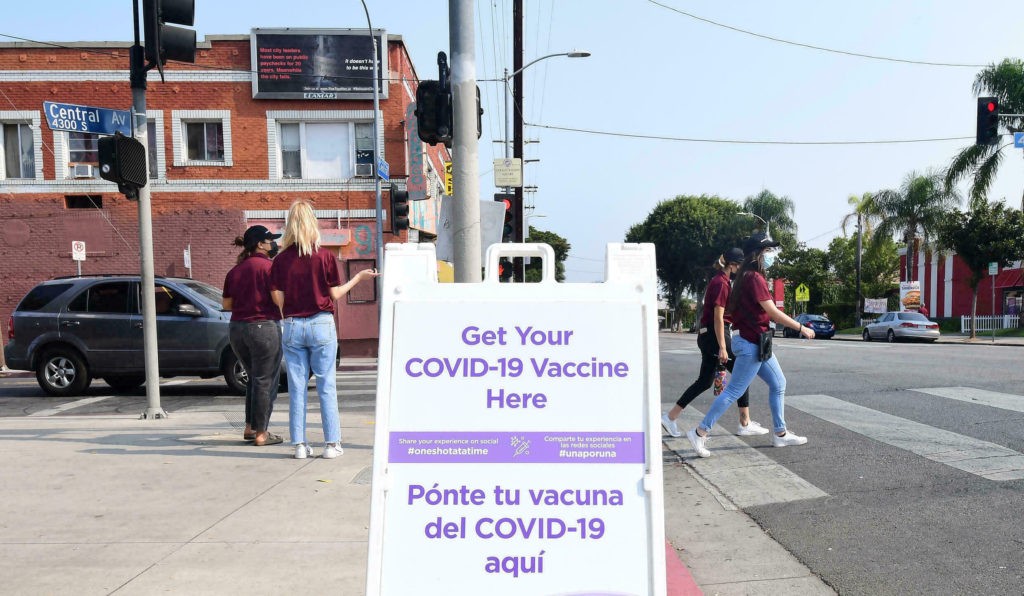 Volunteers in maroon shirts walk the neighborhood to let residents know about the Covid-19 vaccine location by AltaMed Health Services in Los Angeles, California on August 17, 2021. – LA County health officials will begin offering third doses of the Pfizer and Moderna Covid-19 vaccines for people with severely compromised immune systems this weekend. The CDC has revealed about 1.1 million people have already gotten a third dose of the Pfizer or Moderna vaccines on their own, although it remains unclear how many did so due to their weakened immune systems. (Photo by FREDERIC J. BROWN/AFP via Getty Images)

“But because L.A. city employees are unionized, that process is likely to be hashed out in bargaining over how the law affects employees,” the Times reported that Harris said. “L.A.’s proposal specifically states that one of its provisions — restrictions on promoting or transferring workers who flout the rules — will not go into effect until the city has wrapped up the bargaining process.”

The proposed law also states that L.A. city employees who aren’t fully vaccinated must wear masks and keep their distance from others at worksites or when interacting with the public, unless it is “physically hazardous” to do so. Los Angeles Police Department officers have been repeatedly filmed without masks despite a directive to wear them in public, angering critics who say that officers are jeopardizing public health amid lagging vaccination rates reported by the department.

“L.A.’s proposed ordinance says employees who are exempted must undergo weekly testing, which will be provided free during work hours, if they regularly report to a worksite,” the Times reported. “If they are telecommuting, they will need to get tested on an ‘as-needed basis’ whenever they are asked to report to a site.”