In an exclusive interview with Breitbart News on Tuesday, Rep. Guy Reschenthaler (R-Pa.) slammed President Joe Biden for seeking to deflect blame for the “epic failure” on the president’s part in Afghanistan, stating that Biden now “owns” all the recent scenes reminiscent of Saigon and adding that, unlike under Biden’s presidency, the Taliban feared former President Donald Trump.

Reschenthaler began by blasting the president for placing the blame for recent events on others.

“If you notice, he’s blaming everybody but himself in his decision to hastily withdraw,” he said.

He also deemed casting blame on Afghan allies on the ground as “completely inaccurate.”

“They had been fighting, they’ve been willing to fight, [and] they’ve taken massive casualties in the last year and a half and two years, but they were trained to fight with American air support and they always anticipated U.S. support being used to give them assistance against the Taliban,” he said.

He then emphasized the importance of intelligence in battling the Taliban, which was reportedly lacking when the terror group seized the country. 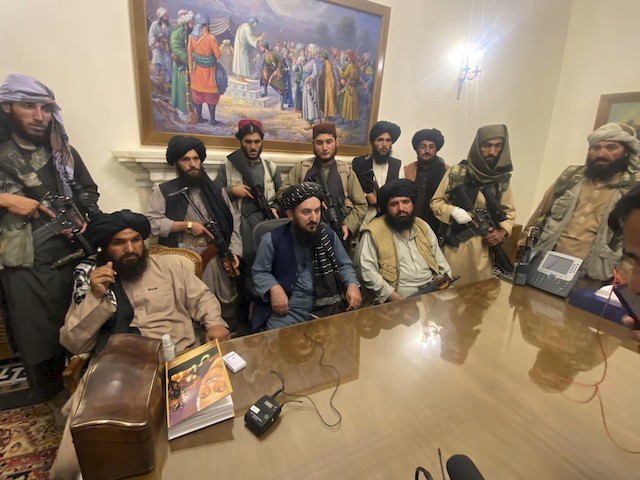 “So completely inaccurate,” he added, “and it’s almost a form of victim shaming in foreign policy to sit there and blame our Afghan allies for how they’re handling this fight.”

Claiming former President Trump would have never “stood by” as the embassy was attacked and overridden, Reschenthaler recalled the former president’s successful deterrence.

“If you look at what President Trump did to [Iran’s Revolutionary Guard Major General Qassem] Soleimani when Shia militia groups were attacking the U.S. Embassy in Baghdad: He isolated the threat that was Soleimani and retaliated against the Iranian regime,” he said.

“The Taliban does not fear the same repercussions from Joe Biden,” he added. 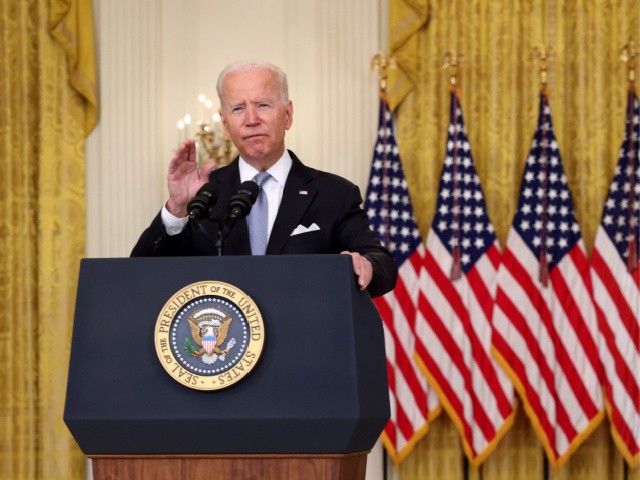 WASHINGTON, DC – AUGUST 16: U.S. President Joe Biden delivers remarks on the worsening crisis in Afghanistan from the East Room of the White House August 16, 2021 in Washington, DC. Biden cut his vacation in Camp David short to address the nation as the Taliban have seized control in Afghanistan two weeks before the U.S. is set to complete its troop withdrawal after a costly two-decade war. (Photo by Anna Moneymaker/Getty Images)

Noting that Biden had “gotten out of so many deals that President Trump had gone into,” including the policy on the border, and the Keystone XL pipeline, Reschenthaler claimed that much of Biden’s term has been dedicated to “undoing” all of former President Trump’s agreements.

“It’s amazing this is the one time where Joe Biden is now claiming he was following President Trump’s directive. It’s nonsense, it was political,” he said.

“Joe Biden just wanted to have an exit prior to that 20th anniversary of the attack on 9/11. This is driven by optics and clearly it has backfired because Joe Biden now owns all these scenes that are reminiscent of the fall of Saigon,” he added.

Asked whether he saw the chaotic U.S. pullout from Afghanistan as an intelligence failure, Reschenthaler expressed doubt at the notion.

“I can’t believe this is an intelligence failure,” he said. “I have friends that served in Afghanistan as JAG [Judge Advocate General] officers — not trained intel officers — and most of them said this is exactly what was going to happen.”

Reschenthaler then accused Biden of “gaslighting” and “finding somebody to blame.”

“So he’ll blame our allies on the ground in Afghanistan, he’ll blame President Trump, now he will blame the intel community,” he said. 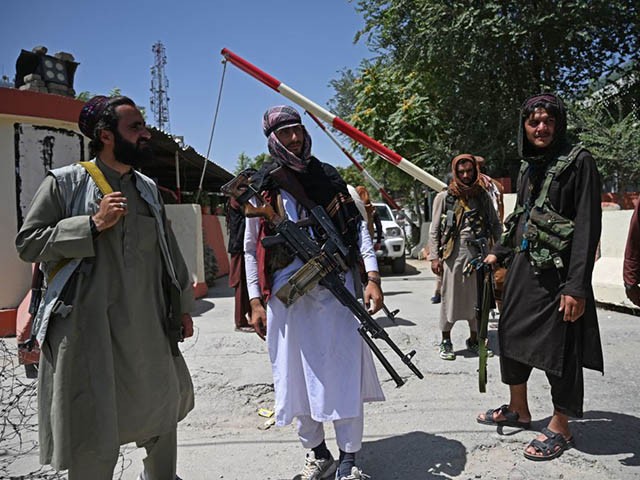 TOPSHOT – Taliban fighters stand guard along a roadside near the Zanbaq Square in Kabul on August 16, 2021 as the Taliban were in control of Afghanistan after President Ashraf Ghani fled the country and conceded the insurgents had won the 20-year war. (Photo by Wakil Kohsar / AFP) (Photo by WAKIL KOHSAR/AFP via Getty Images)

“At the end of the day, Joe Biden made this decision. He owns the consequences of this decision, and, sadly, the United States is in a much more vulnerable place,” he added.

He also warned that such acts harm U.S. standing among allies across the globe.

“If you’re sitting in Taiwan watching this, what’s going through your mind? Is the United States going to be there when the Chinese Communist Party attempts an invasion of Taiwan?” he asked.

“This was not inevitable. We are still, as you know, in Germany. We’re still in South Korea.

We’re still in Japan,” he added.

Claiming he was told this would be a “multi-generational war,” Reschenthaler stated there was no reason why Bagram airbase was not retained in order to “support through airpower and intel our allies on the ground” while also helping protect the embassy.

“This is an epic failure on Joe Biden’s part,” he declared.

When asked about launching an investigation in Congress about the failures, including the billions of dollars of taxpayer money and military equipment that is currently in the hands of the Taliban and freed terrorists, Reschenthaler supported the idea but called for patience.

“We can call for one, but any investigation is going to have to be done when we retake the House in 2022, which I strongly believe we will,” he said.

“The question is do we look in the rearview mirror at the mistakes made or are we preoccupied with the threats that are arising from Afghanistan?” he asked. “That is a problem.”

He also stated his fear the Taliban would have an even stronger hold on Afghanistan than in the past.

“One of the reasons is that they have all the material they took from us, which will help in the short term, but long term it’s very likely that they will make a deal with the Chinese Communist Party which will provide surveillance through technology in that state and the Taliban will then use that surveillance to have an incredibly strong hold on the population,” he said. 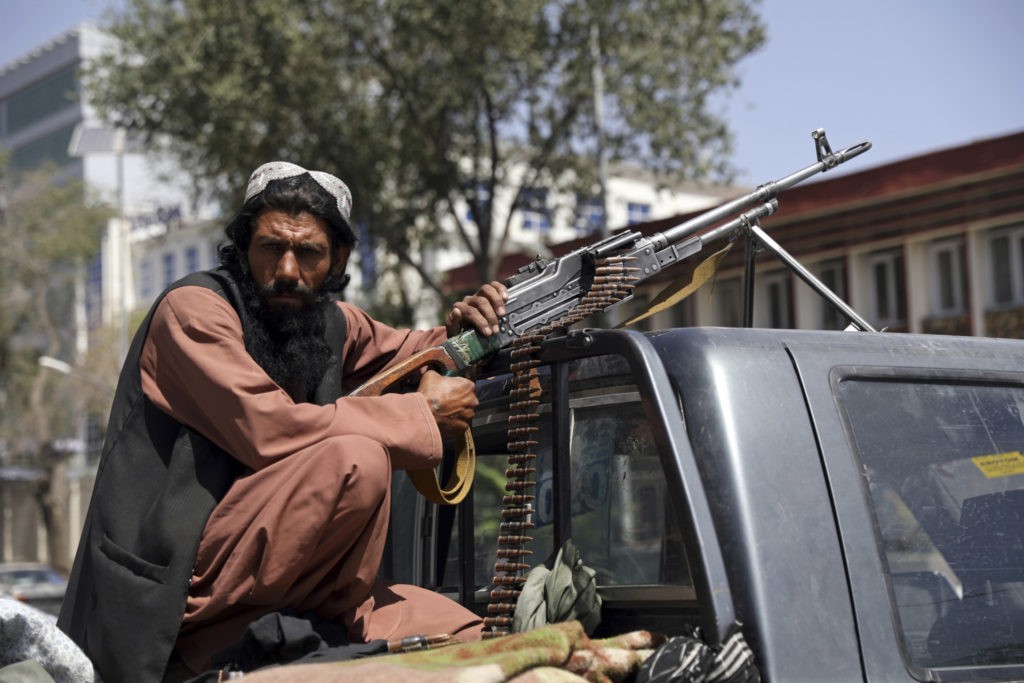 A Taliban fighter sits on the back of a vehicle with a machine gun in front of the main gate leading to the Afghan presidential palace, in Kabul, Afghanistan, Monday, Aug. 16, 2021. The U.S. military has taken over Afghanistan’s airspace as it struggles to manage a chaotic evacuation after the Taliban rolled into the capital. (AP Photo/Rahmat Gul)

“If you want to see what an autocracy will look like in the future, Afghanistan is about to be a case study in that,” he insisted.

The congressman then warned that China would exploit the tremendous repository of the territory’s rare earth materials as the Taliban continues to repress the population.

“They can go in there and take all the rare earth elements from Afghanistan and the Taliban is not going to care as long as they have control of that country and intel for which they can go out after people who believe women be allowed to learn to read,” he said.

“They’ll be able to crack down on those people who want a more western or at least a more democratic system of government,” he added. “It’s going to be really sad for the people of Afghanistan.”

When asked about “Squad” members who are typically vocal about human rights in parts of the world yet have maintained silence on this issue, Reschenthaler called on them to “take a sober look at geopolitics” and, “at the very least,” speak out against the Islamic terror group.

“All Americans should be speaking out against the Taliban,” he said. “Too often people on the left will always want to side with who they see as the people who are the oppressed people.”

The congressman concluded by highlighting the effectiveness of U.S. military presence in Afghanistan.

“From 2001 until today we’ve had no major terrorist attacks on U.S. soil,” he said. “I don’t think it was a coincidence. It’s because we were killing terrorists in Afghanistan and other places around the world.”

“They kept them from killing us here, so at least we had prevention in part due to our involvement in Afghanistan during that time,” he added. 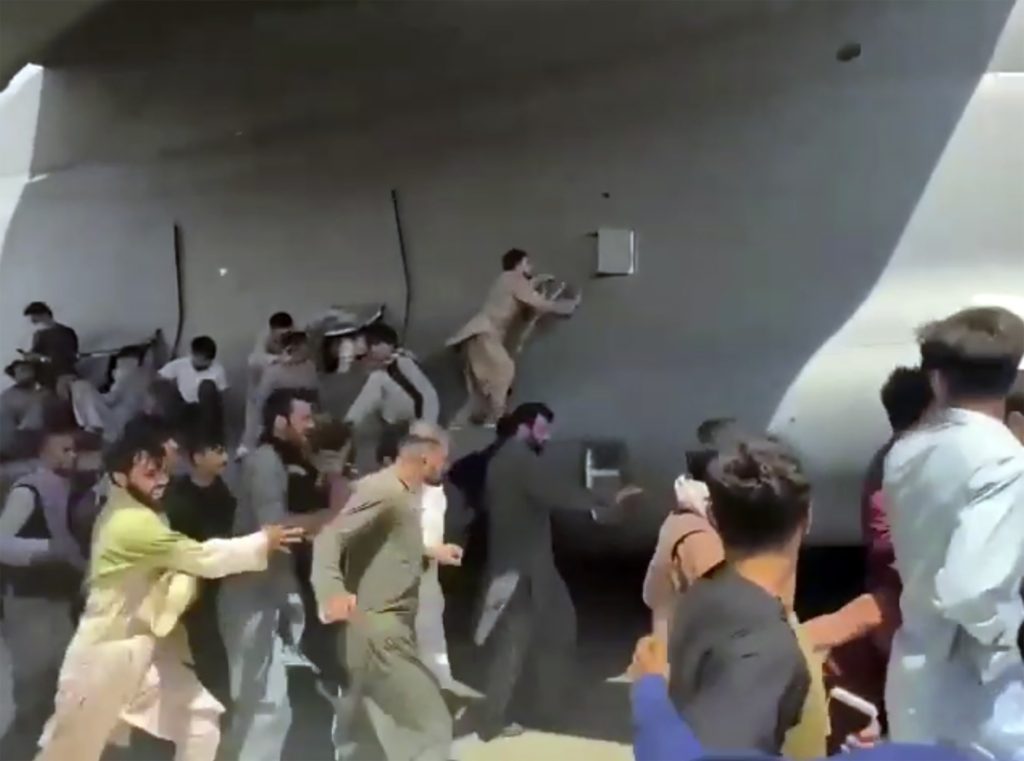 Hundreds of people run alongside a U.S. Air Force C-17 transport plane, some climbing on the plane, as it moves down a runway of the international airport, in Kabul, Afghanistan, Monday, Aug.16. 2021. Thousands of Afghans have rushed onto the tarmac at the airport, some so desperate to escape the Taliban capture of their country that they held onto the American military jet as it took off and plunged to death. (Verified UGC via AP)

Reschenthaler, who served in the Navy Judge Advocate General Corps and volunteered for duty in Iraq, claimed the message sent to veteran soldiers is an “incredibly difficult” and “heartbreaking” one.

In June, Reschenthaler blasted Rep. Ilhan Omar (D-MN) after the congresswoman equated the United States and Israel to Hamas terrorists and the Taliban, going so far as to describe her as unfit to serve in Congress.

In May, he expressed outrage over comments made by “squad” member Rep. Pramila Jayapal (D-WA), which seemed to provide some legitimization for the Hamas terror group’s recent attacks against Israel.

“I am appalled that anyone in America, let alone an elected member of Congress, would blame Israel for Hamas’ firing over 4,000 rockets at innocent Israeli civilian populations,” he said.

That same month, in response to a barrage of anti-Israel rhetoric from a slew of progressive Democrats, Reschenthaler stated that “Israel has every right to defend itself against terrorist groups like Hamas,” before blasting “radical” Democrats for their dishonesty.

“Unfortunately, radical Democrats like Reps. Alexandria Ocasio-Cortez, Ilhan Omar, and Rashida Tlaib would rather criticize Israel and spread lies about who’s to blame for the chaos and suffering,” he said.

He also called upon President Joe Biden to issue a condemnation on the matter.

“President Biden needs to condemn the growing anti-Israel rhetoric in his party and restore President Trump’s successful strategy for peace in the Middle East by defending our closest ally in the region in their time of need,” he concluded.