As protests rage within Iran against the hardline Islamist regime, demonstrations calling for the regime’s fall and death to its Islamic rulers have appeared in its capital Tehran as more and more Iranians speak out against the Islamic Republic’s abuses.

Widespread protests, which began nearly two weeks ago against the government’s handling of the country’s water crisis along with its foreign policy and long history of repression, have led to more and more support for protesters and condemnation of the Islamic Republic’s rulers.

In one video shared on social media, angry protesters in the country’s capital are seen shouting, “death to the dictator” and “[supreme leader Ayatollah Ali] Khamenei, shame on you, leave our nation alone.”

Demonstrating in Jomhouri Avenue and other parts of central #Tehran, angry protestors in #Iran shouted “death to the dictator,” and “#Khamenei, shame on you, leave our nation alone” More here: https://t.co/mnk5sKO17a pic.twitter.com/KInVdbOM5Q

Another clip shows citizens chanting, “Neither Gaza nor Lebanon, I give my life for Iran,” in reference to Iran’s continued investment in strengthening foreign terror groups at the expense of its citizens.

While Iran blames the U.S. for the suffering of Iranians, the people know the real cause: the Ayatollah's cruel and oppressive rule/influence in the Middle East.

"No Gaza, no Lebanon, my soul is sacrificed for Iran," they are chanting. pic.twitter.com/5EvCSGvvk6

In another clip, marchers express unity against the authoritarian regime, chanting, “Fear not, for we stand together.”

“Fear not, for we stand together.”
Anti regime protests in Tehran #Iran.pic.twitter.com/DpXnXEG7fY

More videos continue to reveal arrests of protesters and the deadly use of force by the regime.

After several demonstrators were reportedly killed by Iranian security forces, Amnesty International decried the “unlawful force” used to crush peaceful protests on Friday, while calling for an end to the violence.

Iran’s security forces have deployed unlawful force to crush peaceful protests in Khuzestan. The systematic impunity that continues to take lives in Iran must end. pic.twitter.com/ius6H8dwMZ

Many have voiced support for the Iranian people in recent days while criticizing the theocratic regime, which is also the predominant state sponsor of terrorism worldwide.

In an exclusive statement to Breitbart News on Tuesday, Executive Director of Iranian Americans for Liberty Bryan E. Leib expressed full support for the demonstrators:

The Iranian Americans for Liberty fully supports the Iranian people who have taken to the streets for what started as an isolated protest because of water shortages that has quickly grown to a full scale protest of the regime in the Islamic Republic of Iran with Iranians chanting “death to the dictator” inside Tehran. It’s important to separate the two – the Iranian people seek the freedoms and liberties that we have in America while the regime has a track record of censoring, imprisoning and executing their own citizens for speaking out against the regime.

In addition, the regime continues to spend billions every year funding terrorist proxies around the world such as Hezbollah, Hamas, Houthis and many more. The time is now for all Americans, regardless of their political affiliation to start raising their voices in support of the freedom-seeking Iranian people. It’s also time for President Biden to break his silence on these protests happening inside Iran and to voice his support for the people of Iran.

Maryam Rajavi, leader of the opposition group National Council of Resistance of Iran, expressed support for the protests on Monday, praising the “defiant youths” who have “sounded the death knell of the mullahs’ religious fascism.”

Hail to the defiant youths in #Tehran who have sounded the death knell of the mullahs’ religious fascism by their chants of “death to the dictator,” “Khamenei shame on you, let go of our country,” & “Guns, tanks, are no longer effective.” #IranProtests

In another tweet, Rajavi explained that “The young protesters in #Tehran display the Iranian people’s firm resolve to establish democracy and national sovereignty.”

“Terror regimes should be isolated and their leaders should be treated like the criminals they are,” Kasparov said.

“That is how you can support the people and the victims of these regimes. Instead, the United States is repeating a terrible mistake by negotiating with Iran’s leaders in Vienna. These negotiations are a waste of time except for Iran’s leaders,” he added. 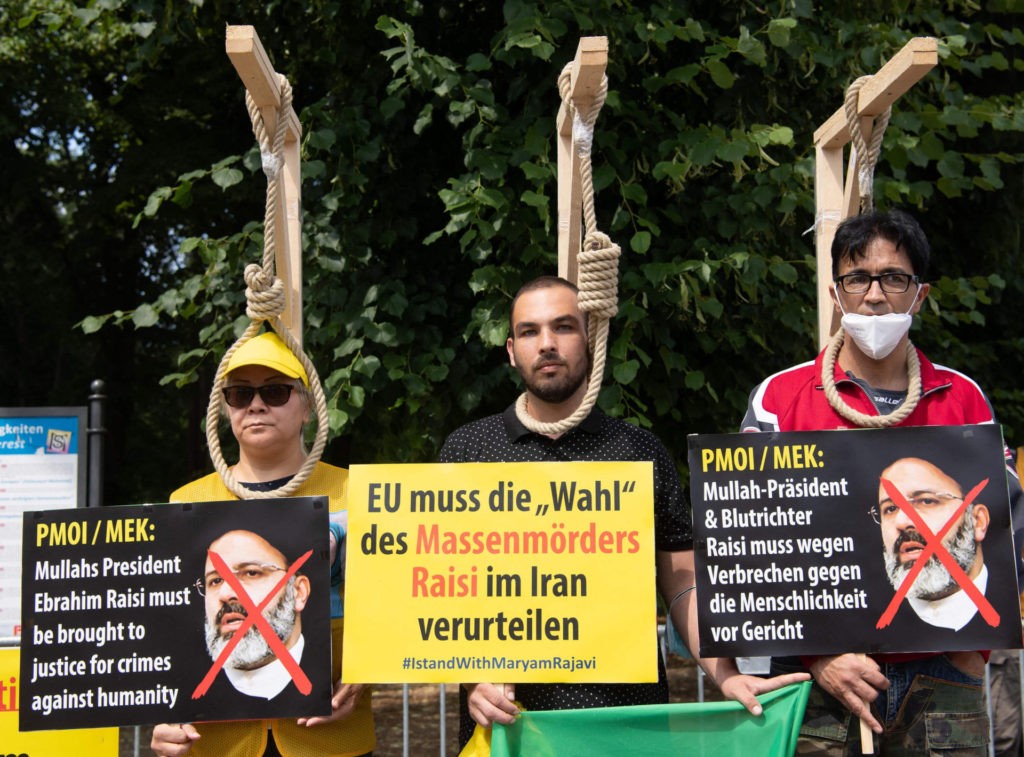 Demonstrators pose with mock-ups of gallows as they take part in a protest called by the National Council of Resistance of Iran (NCRI) against the Iranian regime in front of the Brandenburg Gate in Berlin on July 10, 2021. (Photo by PAUL ZINKEN/AFP via Getty Images)

“The Ayatollahs have said exactly what they want, and it comes down to just six words: death to America, death to Israel,” she wrote.

“Joe Biden must not sign a deal with Iran. Now is the time to put more pressure on Iran, not less,” she added.

The Ayatollahs have said exactly what they want, and it comes down to just six words: death to America, death to Israel.

Joe Biden must not sign a deal with Iran. Now is the time to put more pressure on Iran, not less. pic.twitter.com/dQ4RRBDoWI

On Monday, Iranian athlete Vahid Sarlak posed together with the Israeli Olympic team, to express the openness of the Iranian people to relations with Israelis despite their government’s hostility toward the Jewish state.

“We’re all human beings with one nationality, we have no frontiers among human beings,” he said.

Israeli athletes next to Iranian athletes in the Olympics.

On Friday, Iranian actress Setare Maleky warned Iran’s supreme leader to fear people like her as she spoke of her father’s recent death following Khamenei’s ban on foreign COVID-19 vaccines.

“Fear people like me whose rage is increasing and outgrows your power,” she added.

Iranian Actress Setare Maleky: My Father Died following Khamenei’s Ban on Foreign COVID-19 Vaccine; You Should Fear People Like Me; We Are No Longer Afraid of You; We Despise You #Iran #Khamenei pic.twitter.com/mn7iKS5QAi

“I hope that Mr. Khameni loses the people who are dear to him,” she said, adding, “I hope that [his] life comes to an end.”

Last month, senior Iranian official Majid Tafreshi, a member of the Iranian regime’s High Council for Human Rights, argued that executing underage children is not a “symbol of violations of human rights.”

Earlier this month, Iranian General Amir Ali Hajizadeh, commander of the Islamic Revolutionary Guard Corps’ (IRGC) Aerospace Corps, said America has always been an enemy of Iran and will always remain so, adding the Islamic regime could impose sanctions when the time comes.

Last week, former Secretary of State Mike Pompeo accused the Biden administration of working to make Iran America’s “senior partner” in the Middle East as he called talks with the regime “especially dangerous” for Israel and accused factions of the Democratic Party of “fundamentally antisemitic” behavior.

In addition to severe drought and water shortages, Iran has faced a deteriorating economy with recurring power and internet outages as well as surges of COVID-19 infections across the country.

Iran’s economy has significantly weakened under U.S. sanctions since then-president Donald Trump’s 2018 withdrawal from Iran’s nuclear deal with world powers after referring to the agreement as “a horrible one-sided deal” that would not bring peace.

“The heart of the Iran deal was a giant fiction: that a murderous regime desired only a peaceful nuclear energy program,” Trump said.

On Sunday, President Biden-appointed Special Envoy for Iran Robert Malley, appearing on The Mehdi Hasan Show, endorsed an immediate return to the Iran nuclear deal, which would fully remove sanctions imposed by the Trump administration and grant the hardline regime billions of dollars in assets and a path to legally acquire nuclear weapons.