House Speaker Nancy Pelosi’s archbishop slammed her in a statement on Thursday after Pelosi (D-CA) used her Catholic faith to explain why she supports taxpayer-funded abortions.

“As a devout Catholic and mother of five in six years, I feel that God blessed my husband and me with our beautiful family — five children in six years almost to the day,” Pelosi said during her weekly press briefing at the Capitol on Thursday. “But… it’s not up to me to dictate that that’s what other people should do. And it’s an issue of fairness and justice for poor women in our country.”

Pelosi, who is a longtime supporter of abortion, said making taxpayer-funded abortion legal has been a longtime “priority” for Democrats. Even though Pelosi does not think she should “dictate” whether women have abortions, she said she supports making taxpayers pay for abortions — even those who do not agree — to help women in “lower income situations” as an “issue of health.”

"Devout Catholic" Nancy Pelosi just admitted that having taxpayer-funded abortions is a "priority" for Democrats.

San Francisco Archbishop Salvatore J. Cordileone, who is Pelosi’s local ordinary, said in response on Thursday that for Pelosi “to use the smokescreen of abortion as an issue of health and fairness to poor women is the epitome of hypocrisy.”

“No one can claim to be a devout Catholic and condone the killing of innocent human life, let alone have the government pay for it,” Cordileone said.

He pointed out Pelosi’s warped sense of equity, questioning whether it would be more fair to enable all women to have children, rather than present abortion as the only solution to women in poverty.

“What about the health of the baby being killed? What about giving poor women real choice, so they are supported in choosing life? This would give them fairness and equality to women of means, who can afford to bring a child into the world,” Cordileone said.

It is people of faith who run pro-life crisis pregnancy clinics; they are the only ones who provide poor women life-giving alternatives to having their babies killed in their wombs. I cannot be prouder of my fellow Catholics who are so prominent in providing this vital service. To them I say: you are the ones worthy to call yourselves “devout Catholics!” 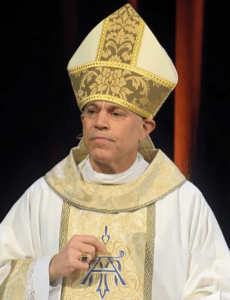 Cordileone has previously spoken out against Pelosi for her stance on abortion. In January, Cordileone said “our land is soaked with the blood of the innocent…” and that Pelosi “does not speak for the Catholic Church,” after she said pro-life Americans who voted for Donald Trump over abortion were “willing to sell the whole democracy down the river for that one issue.”

The House Appropriations Committee recently approved the draft of a spending bill that would allow the federal government to pay for elective abortions in Medicaid, effectively overturning the Hyde Amendment.

The Hyde Amendment was first enacted in 1976, three years after the U.S. Supreme Court decision that legalized abortion nationwide via Roe v. Wade. Lawmakers later updated the policy to add exceptions for cases involving rape, incest, or maternal mortality risk. The amendment is not permanent, so it must be attached to individual appropriations bills for it to take effect.

“[The Hyde Amendment] has saved nearly 2.5 million babies and mothers in difficult circumstances from the tragedy of abortion,” USCCB stated. “Billions of taxpayer dollars could be used to pay for abortion” without these protections, they insisted.

Self-professed Catholic President Joe Biden and his supporters have vowed to eliminate the Hyde Amendment and, consequently, force Americans to fund abortion, even those for whom such an action would violate their faith beliefs and moral standards, Breitbart News previously reported. Biden released his Fiscal Year 2022 budget, which did not include Hyde Amendment, a measure he once reportedly supported.