Migrant children in custody are reportedly desperate to flee the appalling conditions in some of the disease and sexual abuse-prone shelters set up by the Biden administration, where the food can also be dangerous.

The Associated Press (AP) and BBC unveiled the alarming conditions at the shelters this week through their respective reporting, which corroborated their findings. 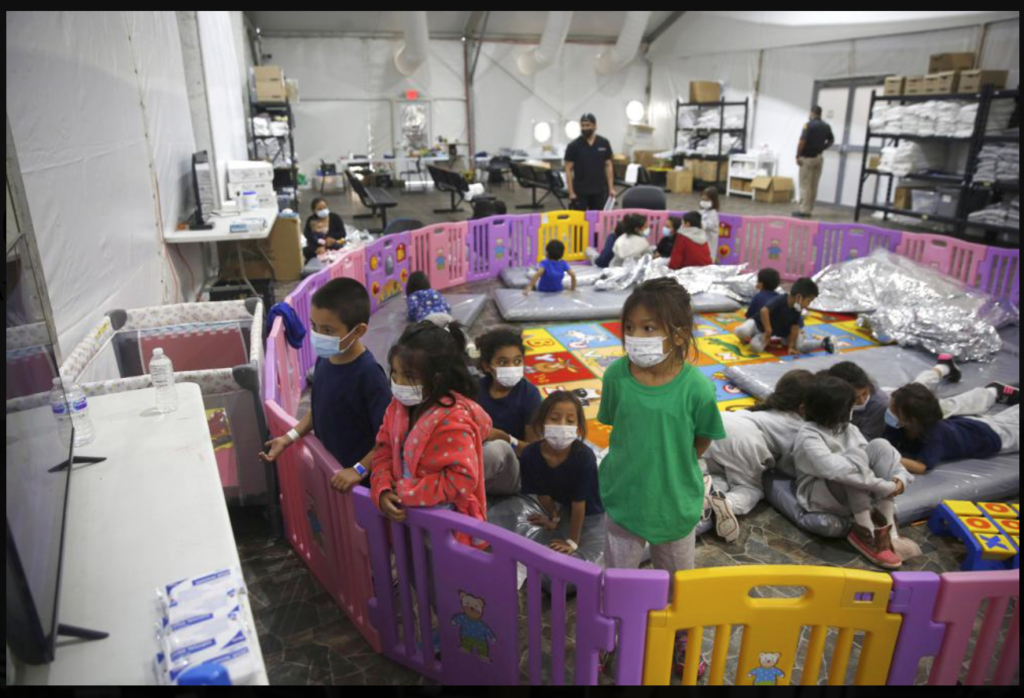 In this March 30, 2021, file photo, young unaccompanied migrants, from ages 3 to 9, watch television inside a playpen at the U.S. Customs and Border Protection facility, the main detention center for unaccompanied children in the Rio Grande Valley, in Donna, Texas. On Monday, June 21, 2021, more than a dozen immigrant children described difficult conditions, feelings of isolation and a desperation to get out of emergency facilities set up by the Biden administration to cope with a rise in the arrival of minors on the southwest border. (AP Photo/Dario Lopez-Mills, Pool, File)

On Wednesday, the British news outlet reported on its investigation of the facility at Fort Bliss in Texas, the Biden administration’s largest emergency shelter consisting of 12 tents, including some that house hundreds of children at a time.

The facility houses an estimated 2,000 children who crossed the border alone and are now waiting to be with family in the U.S.

Findings from the BBC’s investigation include allegations of sexual abuse, Covid [coronavirus disease] and lice outbreaks, a child waiting hours for medical attention, a lack of clean clothes, and hungry children being served undercooked meat. The BBC has spoken to camp employees about these conditions and seen photos and video smuggled out by staff.

“It is heartbreaking to hear their stories and to see them very plainly suffering and to hear the same kinds of complaints over and over again about things that could be corrected so easily,” an unnamed staff member told BBC.

“After a child has been here for a few days, they say, ‘you’ve got to get me out of here as soon as possible. I just can’t stand it anymore,'” he added. “They feel like they are in a prison.”

AP gained access to interviews of more than two dozen children at different shelters conducted by immigration advocates who submitted the minors’ accounts to a federal court.

One of those minors, a 16-year-old Honduran boy at a shelter in Texas, complained:

I am desperate. I wouldn’t mind being here for 20 or 30 days if I knew that I was going to be released soon. But because the process hasn’t started and because I had no idea what’s happening or when the process will start, that makes me feel very, very anxious. I don’t know when this will end.

He had not met with a case manager for more than three weeks to see whether he could go live with his sister in New Orleans.

BBC conducted interviews with children and staff at Fort Bliss, including some who smuggled out photographs of evidentiary value, and conducted secret recordings showing medical personnel neglecting migrant children in need of emergency medical care.

13-year-old Honduran girl who spent two months at the government’s largest emergency shelter for migrant children said she was put on suicide watch and was eating only popsicles and juice because the food smelled so foul. At another site, a 17-year-old Salvadoran girl said she had to wear the same clothes and underwear for two weeks and spent most days in bed.

More than a dozen immigrant children described similar conditions and desperation to get out of large-scale emergency care facilities set up by the Biden administration at places like convention centers and military bases to address a record rise in the number of children crossing the U.S.-Mexico border.

However, even the New York Times conceded that Democrats are now silent as the Biden administration subjects tens of thousands of Unaccompanied Alien Children (UAC) detained at the border to what immigrant advocates describe as inadequate and distressing conditions. UACs refers to minors under 18 traveling with a parent or guardian.

“Democrats say the contrast is for good reason: former President Donald J. Trump’s immigration policies were deliberately cruel, devised as a deterrent to would-be migrants, while the Biden administration is trying hard to deal with a bad hand,” the Times claimed, citing Democrat lawmakers.

Reminiscent of the challenges the Trump and Obama-Biden administrations faced when addressing the care of UACs, advocates have for weeks said President Biden is taking too long to release the minors to relatives in the U.S.

The advocates have also stressed the conditions at some of the unlicensed emergency shelters are inadequate and distressing.

Republicans, Central American governments, and other critics have accused Biden’s more lenient and welcoming approach to all migrants of contributing to the crisis. Biden denies the allegations, claiming the border is closed as he continues to admit UACS, families, and single adults, even while pandemic control protocols (Title 42) that allow for the quick removal of migrants are in effect.