The University of Wisconsin-River Falls removed a radical “Guide to Allyship” document riddled with Critical Race Theory dogma from the “Diversity, Inclusion, and Belonging” section of its website after a conservative politician brought attention to its contents.

Rebecca Kleefisch, who was Lt. governor to former Wisconsin Governor Scott Walker (R), posted a video to Facebook Tuesday, exposing the document for supporting ideas like “All Cops are Bastards,” there are “no good cops,” and “defund the police.”

After Kleefisch’s video, the university — which is taxpayer-funded — took down the guide. However, Kleefisch’s office was able to obtain screenshots and a cached version of the website before its removal.

The guide was posted on May 28, 2020, just three days after George Floyd died during an encounter with police on May 25. It was most recently updated on June 24, 2020, according to a cached version of the document.

Topics listed in the guide included ideas like: “How you can avoid calling the cops,” “In defense of looting,” “Why riots work,” and “Imagining a world without police,” — to name a few. The document also included dozens of links to petitions and Black Lives Matter donation websites.

Critical Race Theory and anti-police rhetoric have no place in taxpayer-funded classrooms. Check out what we found at one UW system school:

“It’s 2021. It’s time we stop judging people by what they look like and then calling it “education,”’ Kleefisch said in her video. 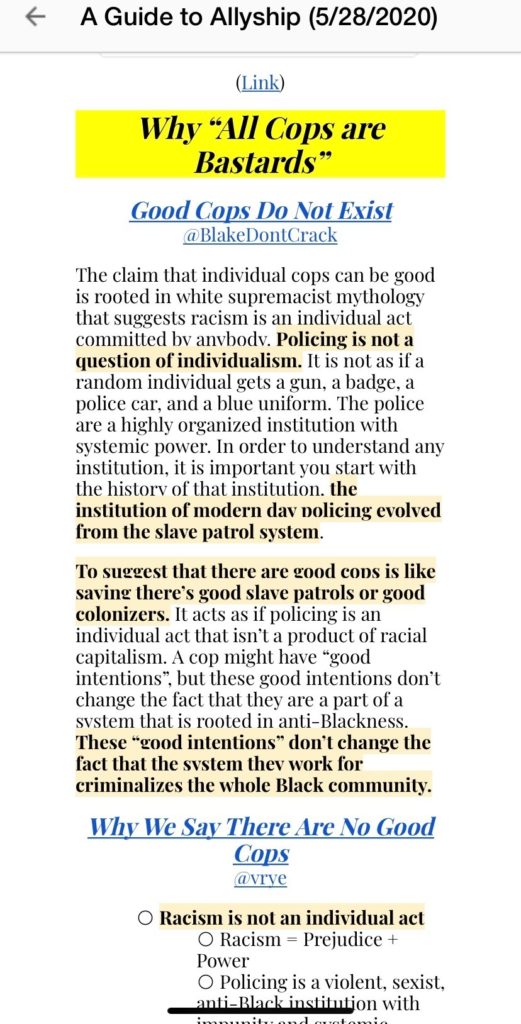 Under the section “Why All Cops are Bastards: Good Cops Do Not Exist,” the text read:

The claim that individual cops can be good is rooted in white supremacist mythology that suggests racism is an individual act committed by anybody. Policing is not a question of individualism. It is not as if a random individual gets a gun, a badge, a police car and a blue uniform. The police are a highly organized institution with systemic power. In order to understand any institution it is important you start with the history of that institution, the institution of modern day policing evolved from the slave patrol system.

Ideology like the text above is known as “Critical Race Theory,” and has infected the nation’s largest institutions, as Breitbart News has reported previously:

Critical Race Theory holds that the United States is racist by design, because its Constitution and all of its other institutions emerged in a context where slavery was legal. According to the theory, the very institution of private property in the U.S. is corrupt because it was enshrined in a system that saw black people as chattels.

…When rioters attack police, tear down statues, or demand submission from patrons in restaurants, they are motivated, in part, by Critical Race Theory. Andrew Breitbart saw it coming; President Trump is the first leader to do anything to fight it.

Breitbart News reached out to the University of Wisconsin-River Falls on Wednesday and asked why they took the page down and if they stand by the positions held in the document. The school responded with this statement:

UW-River Falls regrets the posting of a link on one of its webpages to an editable document from a third-party source which, after being posted, was edited at the source to include statements against law enforcement. The opinions and views reflected in the document do not reflect the values of the university. UWRF is appreciative of the work of law enforcement and is committed to promoting an inclusive campus environment. The webpage has been removed and the university has taken steps to develop a process for reviewing such content in the future.

According to the school, the document was open for third-party edits, and they were unaware of what was written in it. The document was on the university’s website for more than a year before Kleefisch drew attention to it.

“This is proof that conservatives can successfully speak out and fight back against this garbage. Our tax dollars shouldn’t be used to fund this. Critical race theory and anti-police rhetoric have no place in the classroom. Racism is cowardly, no matter how it is cloaked,” Kleefisch told Breitbart News.