The U.S. Navy’s newest littoral combat ship, the USS Canberra, was christened Saturday in Mobile, Alabama, in a salute both to Australia’s capital city and the enduring alliance between the two nations in war and peace.

The honor makes it the only U.S. warship to be named after a foreign capital and reflects shipbuilder Austal USA‘s own Australian roots.

Independence-class vessels, which include the USS Canberra, feature a trimaran hull design which is a break away from the steel/aluminum monohull of the Freedom class.

“Today, just 16 years after Austal USA joined the U.S. defense industrial base, the company is hosting its 15th littoral combat ship christening — LCS 30, a ship proudly named after the capital of Australia and yet another symbol of the great ties between our two countries,” said company President Rusty Murdaugh as he marked the event, according to the Times of San Diego.

Construction of the vessel began in 2019 with the name being personally chosen 12 months earlier by then-President Donald Trump who endorsed the vessel as a symbol of the bond between the U.S. and Australia.

“As she sails the opens seas, the new USS Canberra will be a symbol to all who cross her path of the enduring friendship between the United States and Australia,” he said. “There is no closer friendship.”

Built by Austal USA in Mobile, it is the first LCS launched by the company this year, a product of the shipyard’s new floating dry dock, the company said.

It is the second U.S. Navy ship named after in honor of the HMAS Canberra, a Royal Australian Navy heavy cruiser that was sunk in the Battle of Savo Island at the start of the Guadalcanal campaign in World War II.

The battle of Savo Island was one of the first major naval engagements in the Pacific to feature a mixed force of U.S. and Australian vessels fighting side-by-side against the Japanese.

The first USS Canberra was a Baltimore-class cruiser and later a Boston-class guided missile cruiser. 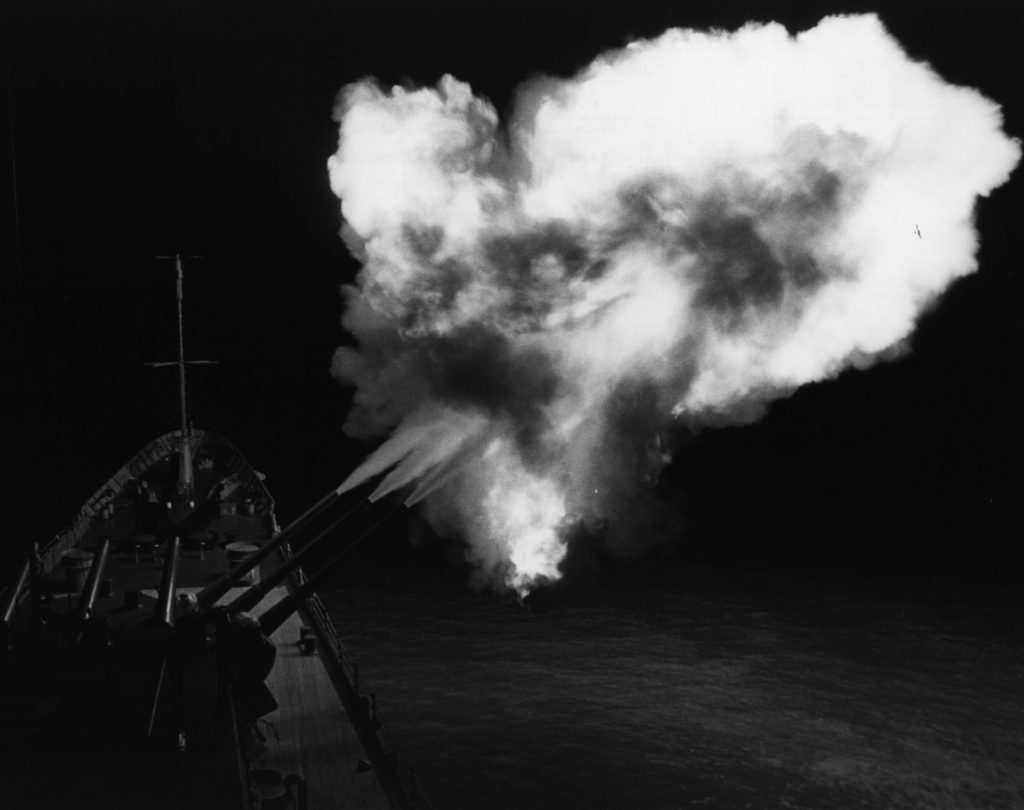 A flash from a triple salvo lights up the night as guns on the USS Canberra fire at military targets on the North Vietnamese coast. (Photo by Hulton Archive/Getty Images)

The ship entered service in 1943, and served in the Pacific theater of World War II until she was torpedoed during the Aerial Battle of Taiwan-Okinawa and forced to return to the United States for repairs.

Placed in reserve after the war, Canberra was selected for conversion into the second guided-missile carrying warship in the USN fleet.

Following the conversion, she was host to the ceremony for selecting the Unknown Soldier representing World War II in 1958, undertook an eight-month round-the-world cruise in 1960, participated in the Cuban Missile Crisis naval blockade in 1962, and was deployed to the Vietnam War on five occasions between 1965 and 1969.

Canberra was decommissioned in 1970, struck in 1978, and broken up in 1980. One of her propellers is preserved at the Los Angeles Maritime Museum, while the ship’s bell was donated to the Australian National Maritime Museum in 2001.