CHESTERFIELD, Virginia — The Republicans running for governor in Virginia are competing in an unassembled convention Saturday to determine the candidate who will face off in the November election to replace Gov. Ralph Northam (D), who is term-limited and cannot run for reelection.

The event is happening remotely rather than at one large-scale site because of coronavirus restrictions, and the Virginia Republican Party has set up 39 polling locations across the state at which candidates are hopeful pre-registered delegates will turn out to vote for them.

The state GOP announced a record 54,000 delegates have signed up to vote for Saturday, though the percentage of those who actually turn out is a concern with polling sites being spread out, and with the event taking place on a weekend, specifically Mother’s Day weekend where there is the possibility that some delegates will have left town.

The last time a convention took place instead of a primary, which was eight years ago, 8,000 delegates voted. Many have described this hybrid convention setup as “unprecedented” as it will likely produce a substantially higher turnout than the last convention because of the multiple polling sites instead of the typical one location, and because of the record number of delegates.

Virginia Republican Party chair Richard Anderson called the convention the “largest in US history!” and indicated “VA Republicans are fired up and ready!” in a statement this month.

The convention will use ranked-choice voting, meaning the candidate with the most votes must receive 50 percent of the vote plus one vote to win the nomination. With seven Republicans running for governor including multiple frontrunners, the candidate likely will not achieve that on the first round, and subsequent rounds that factor in second- and third-ranked candidates, and so on, will have to occur.

“Likely it won’t happen on the first ballot, but who knows, maybe when we start counting on Sunday, maybe I’m surprised. This is politics, so it’s unpredictable,” Anderson told the Larry O’Connor Show Friday.

Competitive candidates on the ballot include former Carlyle Group CEO Glenn Youngkin and New Media Strategies founder and entrepreneur Pete Snyder, both running as political outsiders who have had the ability to self-fund much of their campaigns. Two current state lawmakers, Sen. Amanda Chase and Del. Kirk Cox — who was formerly Virginia House speaker — are also viewed as frontrunners.

Youngkin, in the final week of the campaign, snagged a last-minute endorsement from his friend Sen. Ted Cruz (R-TX). Cruz joined Youngkin on the campaign trail this week, and the two attracted relatively large, high-energy crowds. Breitbart News witnessed an event at an equestrian facility in southwest Chesterfield, where a riled-up group of a few hundred had gathered for Youngkin and Cruz.

“Virginians are coming together like never before because everyone knows that the Democrats — Terry McAuliffe and Ralph Northam — have led us into the ditch, and we all are going to get out of this ditch, and we’re going to do it together,” Youngkin announced during the event.

Former Virginia Gov. Terry McAuliffe (D), a longtime Clinton ally and former Democratic National Committee chair, is the presumed Democrat candidate for November, according to polling and fundraising; however, a Democrat primary in June will give the final decision on the party’s nominee.

Youngkin said during the Chesterfield event, “I need you all to show up. I need you to show up early. I need you to vote, and I’m asking you right here and now, ladies and gentleman, please put Glenn Youngkin as your top choice for governor.” 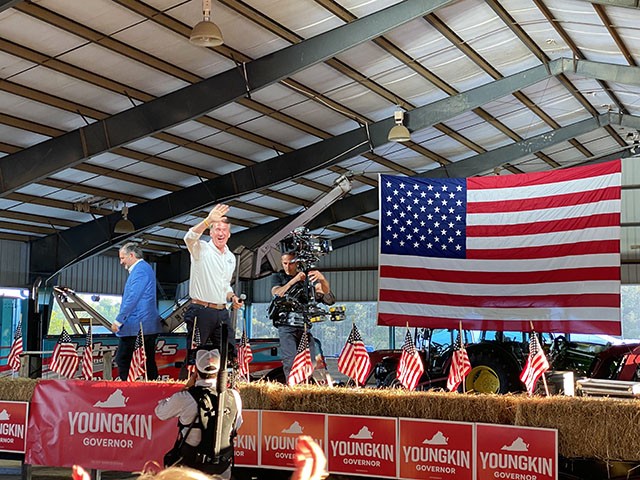 The big-name surrogate also, like Cruz, came out in the final week of the race to campaign with Snyder on Wednesday in Arlington. Breitbart News attended the event, which was capped at a hundred people, where Sanders told the crowd, “Pete has been called to run for this office. … He’s running to be your voice, your fighter on the front lines, but he needs your help to get there.” 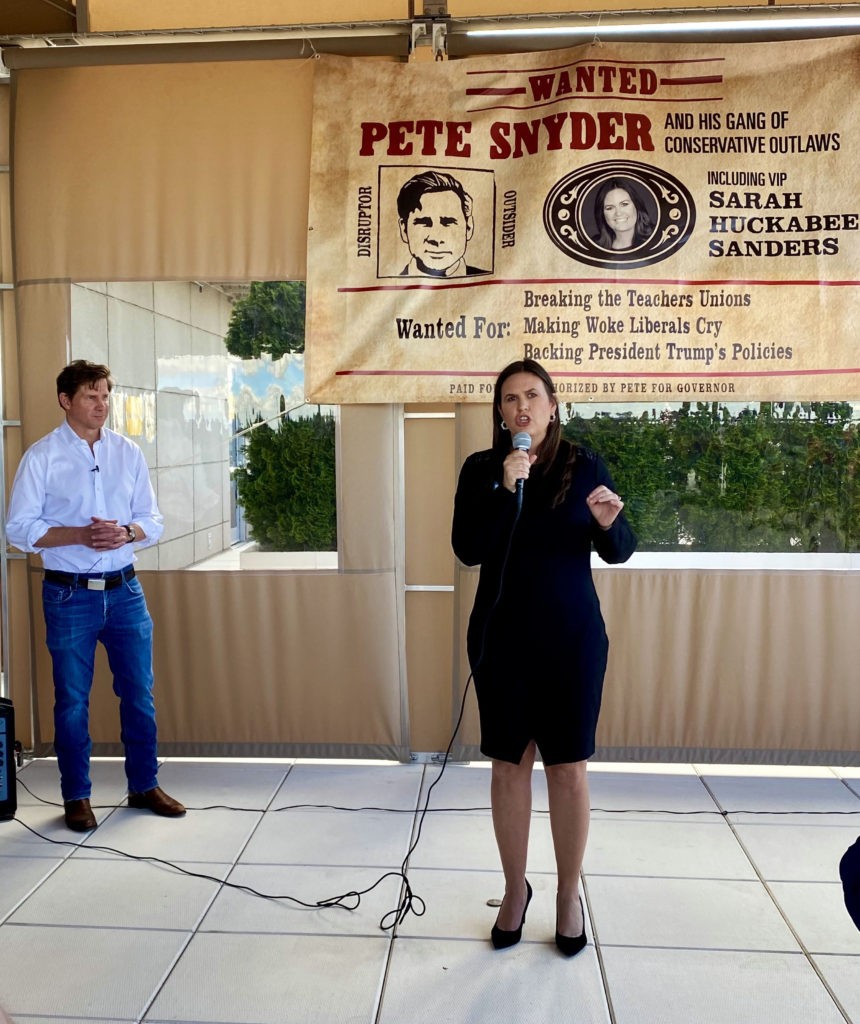 Snyder, who now heads Disruptor Capital, said in remarks after Sanders, “Don’t you think Richmond needs a disruptor now? … If you want that city shaken to its very core, and you want a true conservative who’s going to bring real conservative change, isn’t going to bend, isn’t going to fold like all the folks before, I am absolutely your candidate.”

Along with their last few days of campaign pushes, the candidates also offered final video messages making their case for the nomination.

The candidates will not know their fate right away, as the Virginia Republican Party does not plan to begin counting votes until Sunday. A tabulation team will begin a hand-counting process Sunday after couriers transport sealed ballot boxes from the 39 polling locations to Richmond Saturday night. Anderson on the Larry O’Connor Show said he personally will be present to take custody of the boxes Saturday, and has said police officers will help with guarding the boxes and the entire process will be livestreamed.

As far as when the results will be announced, Anderson said, “I don’t have a crystal ball,” but he said his “best guesstimate” is that “probably we’ll be able to have all three races counted no later than Tuesday.” He caveated though that the process could extend a day or two beyond that.