Police in India’s capital, New Delhi, have arrested an Indian woman for editing a document promoted by the Swedish environmental activist Greta Thunberg in support of India’s ongoing farmers’ protests.

Police arrested Disha Ravi, 22, over the weekend in Bengaluru, where she resides. Authorities later transported her from the southern Indian city to the national capital for questioning. A New Delhi court on February 14 ordered that Ravi remain in police custody for five days.

Indian government officials said Ravi’s arrest was part of a New Delhi police investigation into how a group of farmers managed to storm the city’s historic Red Fort on January 26. Police in the national capital have registered a case of sedition and criminal conspiracy against Ravi. India’s sedition law dates to its colonial era, when it was ruled by Britain, and carries a maximum penalty of life in prison.

Ravi leads the Indian branch of Thunberg’s climate-related “Fridays for Future” movement. Thunberg shared a “toolkit,” or an action plan document, on Twitter on February 3 that urged readers to take certain actions to support the Indian farmers’ protests.

“She [Ravi] was one of the editors of the toolkit Google Doc and a key conspirator in the document’s formulation and dissemination,” according to a statement by New Delhi police spokesman Anil Mittal. 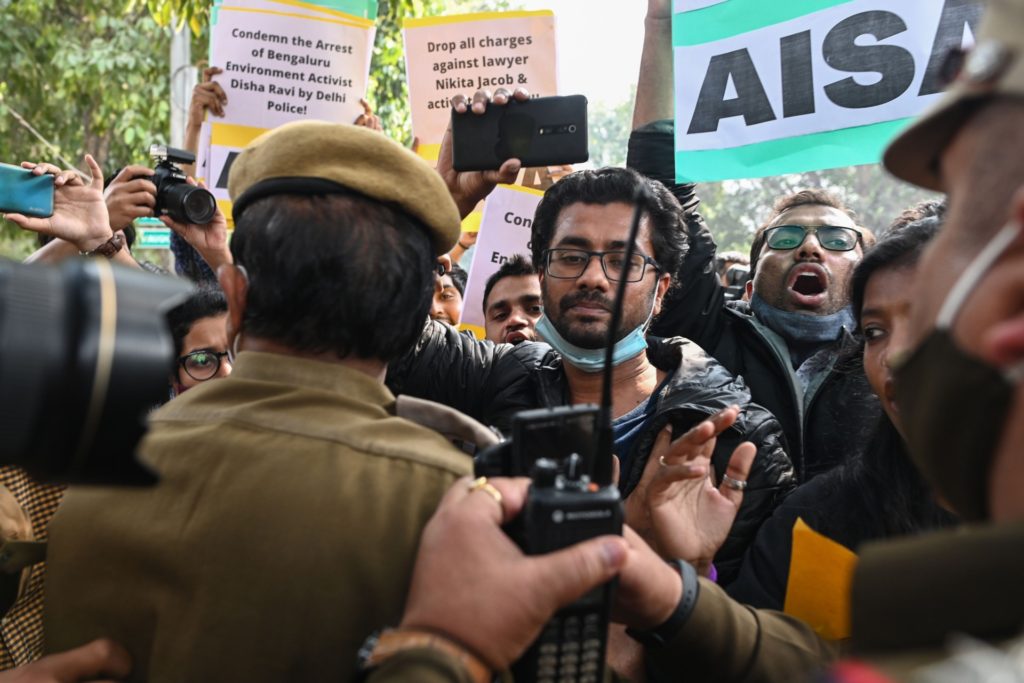 Police personnel stop demonstrators as they try to cross police barricades during a protest against the arrest of climate change activist Disha Ravi by Delhi police for allegedly helping to create a guide for anti-government farmers protests shared by environmentalist Greta Thunberg, outside the Delhi Police headquarters, in New Delhi on February 16, 2021. (SAJJAD HUSSAIN/AFP via Getty Images)

“The main aim of the ‘toolkit’ was to create misinformation and disaffection against the lawfully enacted government,” New Delhi police official Prem Nath told reporters on Monday.

“The toolkit sought to artificially amplify fake news through various tweets which they have created in the form of a tweet bank,” Nath added.

Police in the national capital said they were also looking to detain two of Ravi’s associates as part of a widening probe into what instigated recent violence at the farmers’ protests.

Tens of thousands of farmers have been camped out in the suburbs surrounding New Delhi since November to protest three recently passed agricultural reforms; the farmers say the reforms threaten their historic price and labor protections. Thousands of farmers defied a pre-approved marching route on January 26, breaking through police-laid barriers to enter central New Delhi. The farmers clashed with police, injuring over 300 officers. One farmer died after the tractor he drove to break through the capital’s barricades overturned.

The chaos culminated in a mob of farmers overtaking police stationed at Delhi’s Red Fort to push past its gate and scale its walls. 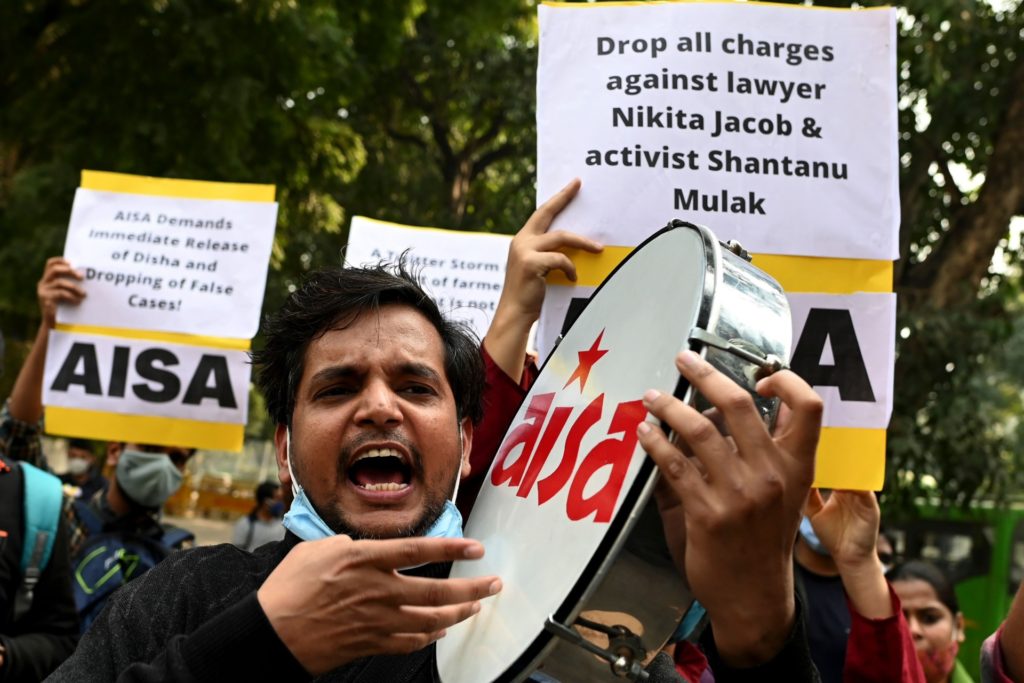 Demonstrators shout slogans during a protest against the arrest of climate change activist Disha Ravi by Delhi police for allegedly helping to create a guide for anti-government farmers protests shared by environmentalist Greta Thunberg, outside the Delhi Police headquarters, in New Delhi on February 16, 2021. (SAJJAD HUSSAIN/AFP via Getty Images)