The Save America Coalition — a coalition of conservative activist organizations such as Club for Growth Action, FreedomWorks, and Tea Party Patriots — launched a statewide tour to save the Republican majority by electing Loeffler and Perdue.

Club for Growth Action President David McIntosh led the Save America Coalition’s tours on Saturday in Duluth at the Gwinnett County GOP headquarters and in Canton.

McIntosh told Breitbart News in an interview after the Duluth event that the Save America bus tour is designed to boost Republican turnout ahead of the January runoffs. The event featured roughly 100 attendees.

Other Republicans such as Reps. Ken Buck (CO), Louie Gohmert (TX), and Andy Biggs (AZ) spoke at the event in Duluth, while Sen. Mike Lee (R-UT) spoke at the Canton event. The event in Canton featured Lee Greenwood, the acclaimed country music singer and songwriter.

“Everything we do, we have to encourage people to vote and tell them how important it is. And it’s not just about these two candidates, it’s about saving the Senate, about saving America from the socialist Democrat agenda,” McIntosh said.

He added that Club for Growth Action hopes to utilize their hundreds of activists to knock on one million doors between now and the January 5 runoffs, send two million texts, and send out five million pieces of mail.

Jordan told Breitbart News that grassroots Republicans understand that the stake for the Georgia runoffs is whether “America will stay America.” 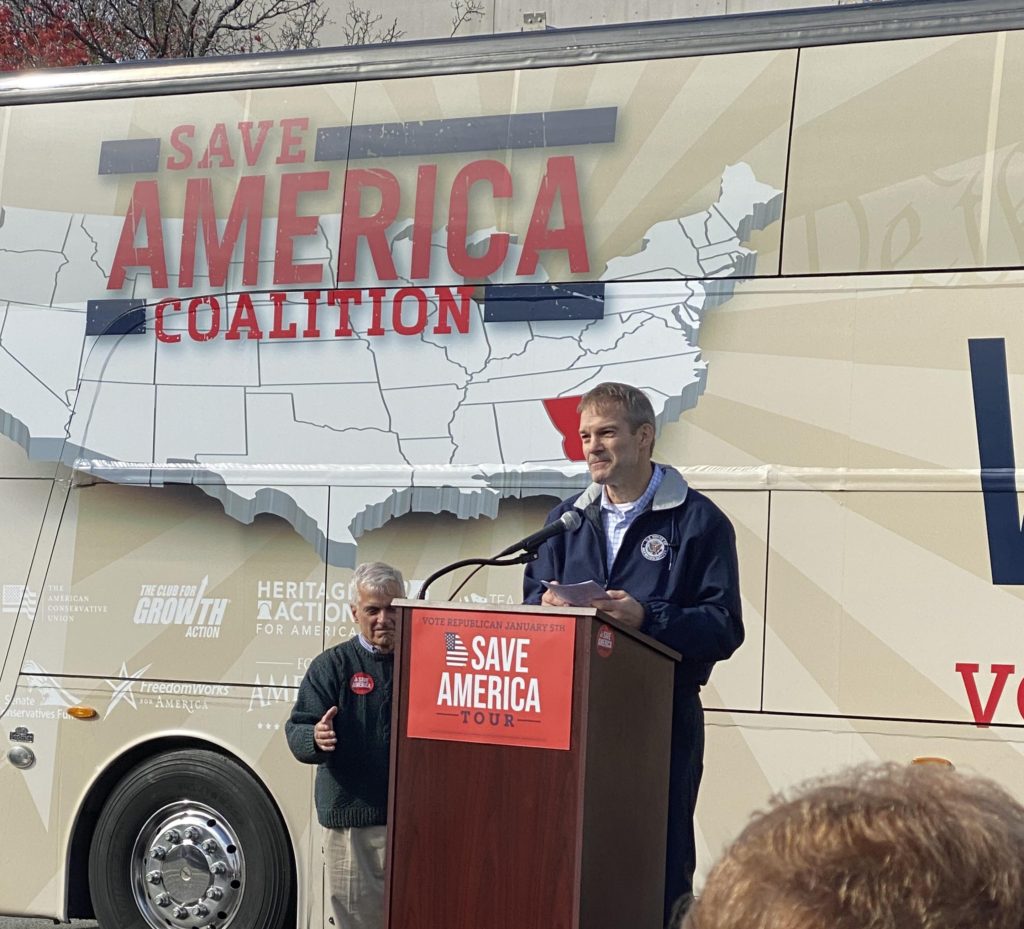 Daines explained to Breitbart News that many of President Donald Trump’s accomplishments were achieved by very close votes in the Senate, oftentimes achieved by having Vice President Mike Pence break the tie in Congress’s upper chamber. On the obverse side, this would mean that if Loeffler and Perdue lose in January and Democrats gain the Senate majority, then a potential Joe Biden administration could enact its agenda with the help of Sen. Kamala Harris (D-CA), the likely next vice president, as the tiebreaking vote in the Senate.

“Every one of these votes we have taken whether you look at Brett Kavanaugh or Amy Coney Barrett has been just razor-thin margins. In fact, Vice President Mike Pence broke 13 ties when he was vice president,” Daines told Breitbart News during the Save America Coalition event in Canton. “That’s the most for any vice president since 1876 so that’s just how thin the margins are. It all comes down to Georgia. This is the Super Bowl. We hold Georgia, we hold the Senate. We lose Georgia, we lose the Senate. And it’s as simple as that.” 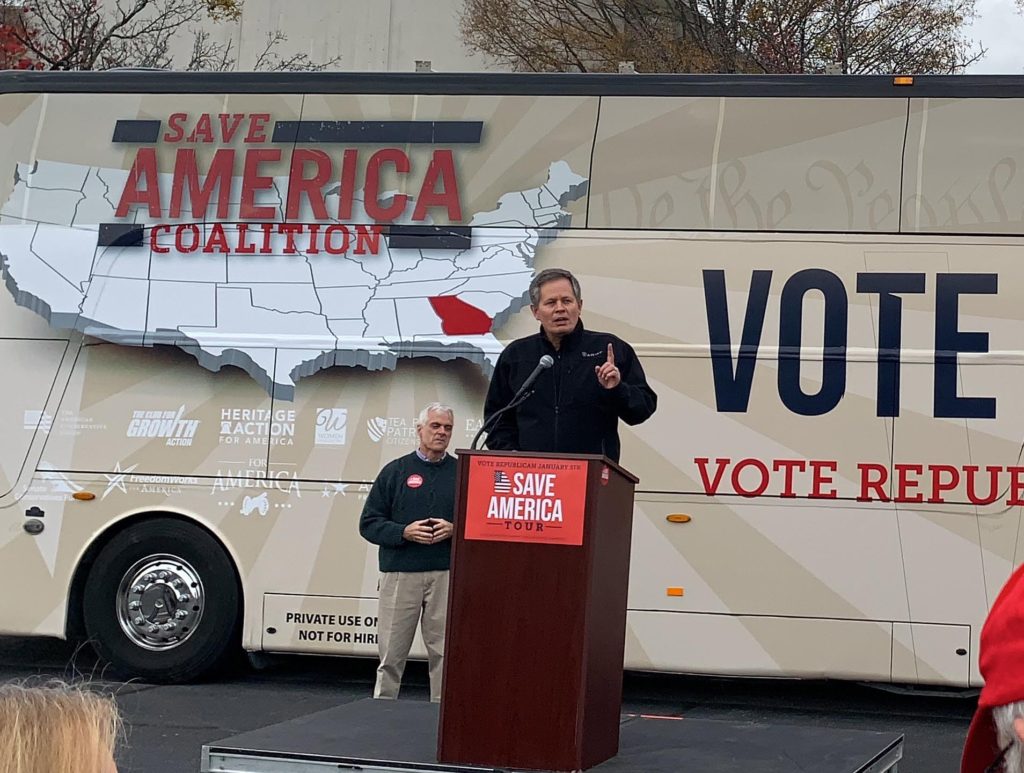 Daines, who fended off a challenge this year from Montana Gov. Steve Bullock (D), said that the January runoffs will be decided by whichever side gets its base out. Daines’s reelection was considered one of the pivotal races needed for Republicans to maintain the majority during the 2020 Senate races.

“Turnout is everything. It’s who shows up. It’s pretty simple — whoever gets the most votes wins,” Daines said.

“That’s the purpose of this tour, to get the base mobilized and make sure they start voting on December 14 for early voting,” the Montana senator noted.

Greene, the congresswoman-elect for Georgia’s 14th Congressional District, told Breitbart News that the stakes could not be higher for the country.

“I was saying President Trump’s election is the most important election in history. It’s our Senate seats, and it’s coming down to Georgia,” she charged.

Greene added that preserving the Republican majority would allow for the Senate to investigate alleged corruption with the Biden family and stop Democrats from further entrenching their power in Congress.

“It’s also about investigating the Biden crime family, Hunter Biden, James Biden, and Joe Biden. It’s also things like protecting the filibuster, stopping them from adding more states to our country; it’s packing our courts, which is what they want to do. And if the Senate goes to the Democrats and Joe Biden is in the White House, and Nancy Pelosi has control of Congress, we’re possibly looking at the end of Republicans being able to win moving forward,” she said.

Hice, the congressman for Georgia’s 10th Congressional District, explained to Breitbart News the benefit of Perdue and Loeffler being political outsiders with backgrounds in business. 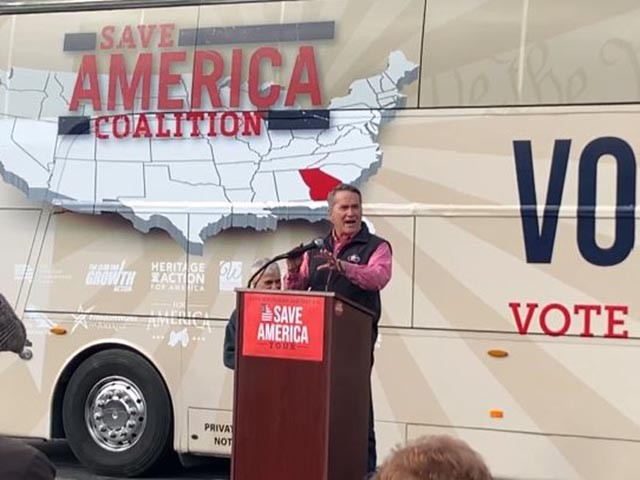 “We have among the two greatest senators in the country right here in Georgia. And what really separates them is that they’re both business people. Neither one of them are politicians. Both of them are individuals that are concerned for our country, they have experienced the American Dream firsthand, and they stepped up to the plate after seeing that the trends in this country were trending towards bigger government and socialism,” Hice said.

Hice added that the Georgia runoffs come down to preserving the Founder’s vision of limited government and fighting the Democrats’ socialist vision for the country.

“Most of the base recognizes that we’re in the fight of our life for this country. Primarily we have two candidates on the other side who are outright socialist and Marxist, and this election is going to determine the direction of the country, not only the balance of power but the direction of political philosophy be it an America of limited government, maximum freedom versus socialism. The people on the ground are recognizing that they understand the enormous importance of that,” he said.