In normal times, debates about a figure like Christopher Columbus would just be a part of the usual work of historians and others seeking to understand some portion of the human past. But these are not normal times. And it is clear that the violent attitude of many recent protesters towards the explorer who opened up the New World to the Old World has much less to do with anything in the historical record than with a crisis – no other term will do – within our Western civilization.

The historical record, which is extensive and easy to consult, would go far towards tamping down the anti-Columbus hysteria – for anyone really interested in knowing the truth. That, however, doesn’t seem to be a large cohort these days. Instead, many of our fellow citizens have since early school days been indoctrinated into the belief that Columbus was a “genocidal maniac” and (what else) “worse than Hitler.”

Parents often complain when kids come home mouthing these phrases. And where’s the evidence? Which peoples suffered “genocide” at his hands? None. Hitler killed at least 40 million people. Did Columbus have weapons of mass destruction at his disposal that would have enabled him to kill on a grand scale? He did not and, as a serious Christian, he wouldn’t have used them even if he did. 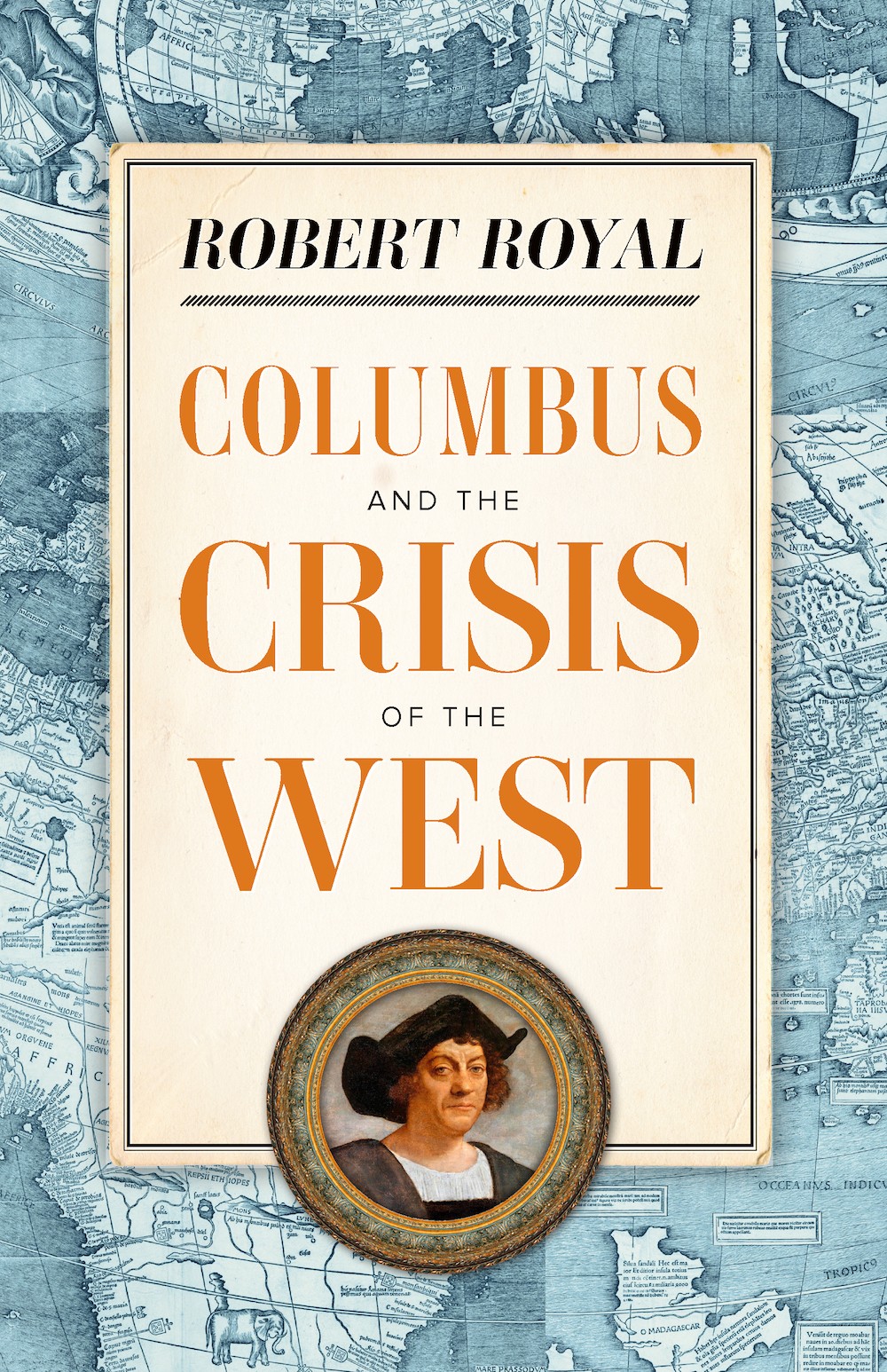 The most that can be said against him is that he was a poor governor – a great navigator and explorer, and daring as few in human history – but actually quite bad in running the agricultural community he tried to set up in the Caribbean. He was, by turns, too indulgent towards both the indigenous and Spanish, and then too harsh towards both again when he tried to resolve the inevitable clashes between two very different cultures that had never come into contact before.

And he knew it. He wrote to Ferdinand and Isabella, saying, “I shall never be able to administer just punishments, unless fifty or sixty men are sent here from Castile with each fleet, and I send there the same number from among the last and the insubordinate, as I do with this present fleet — such would be the greatest and best punishment and least burdensome to the conscience that I can think of.”

The mention of “conscience” here shows his sensitivity to some of the moral questions he faced. Contrary to the view that he is the source of later mistreatment of Native Americans, he tried to get help in restraining that very abuse. At one point, he complained to the Spanish monarchs about the way that Spaniards were exploiting natives for gain and taking indigenous concubines. He asked them to send Christian missionaries to the Spaniards: “it would be of great advantage to have some devout friars here, rather to reform the faith in us Christians than to give it to the Indians.”

The Dominican priest Bartolomé de las Casas, the famous “defender of the Indians,” knew Columbus and spoke of the “sweetness” of his temperament and, despite serious missteps in difficult and often unprecedented circumstances, his “good intentions.”

Whatever later Europeans may have done towards indigenous populations, it’s simply unjust to put Columbus and many other figures into the same large group of ruthless exploiters. Simple fairness demands that we draw distinctions between imperfect people – as we all are – with basically noble and good intentions and those of evil disposition who exist in every age among all peoples.

Of course, that is precisely a distinction that the recent protesters do not make. And we have to ask why? Without overgeneralizing, the only plausible answer seems to be that we have many fellow citizens who have never been properly taught about their culture, are deeply alienated from their own civilization in the Americas, and therefore believe that the only moral thing to do is to reject it from its very origins, with Columbus.

We’ve seen something similar in the way that the New York Times’ “1619 Project” has sought to claim that the arrival of the first black African slaves in North America in 1619 is the real beginning of the nation. After serious criticisms from distinguished historians of various political orientations, the Times has had to quietly deny its original claims and continues to alter them as more and more of the project looks to be ill conceived.

But there’s a larger and deeper question even than the clear historical facts about Columbus, Europeans, slavery, and our current turmoil. Slavery, for example, is universally present in human history. Even today when slavery is, in theory, no longer legal, scholars estimate that there are 40 million slaves of various kinds in the world, the largest percentage in Africa.

Columbus and the Europeans did not bring slavery, racism, inequality, exploitation, imperialism, or torture to the New World. They all already existed here. The peoples of the New World were human beings, like the people in the Old World, with the very same all-too-human traits we associate with human nature.

What Europeans did bring was Christianity, the only religion that took seriously the notion that all human beings have been made in the image and likeness of God – however much Christians in the New World may have failed to live up to that truth.

Fr. Las Casas and several theologians convinced the Spanish monarchs that it was immoral to enslave or mistreatment indigenous peoples and encouraged them to pass laws – usually ineffective – against the practice. They even helped persuade Pope Paul III to write in a 1537 encyclical that Indians “may and should, freely and legitimately, enjoy their liberty and the possession of their property; nor should they be in any way enslaved; should the contrary happen it shall be null and of no effect.”

Later, it was Christians – mostly British Methodists – who stopped the slave trade and agitated for abolition.

Modern people heirs to that tradition usually fail to realize that the very principles that they use to criticize the misbehavior of European colonists stem from Biblical notions developed mostly in Europe. But there were evil practices to be dealt with among native populations as well. For example, there was human sacrifice in the Caribbean – and even cannibalism – when Columbus arrived there.

When Spaniards reached the mainland, they were horrified at the vast numbers of human beings who had their hearts cut out and their bodies thrown down the steps of the temples in Tenochtitlán — the core of today’s Mexico City. That city appeared to the earliest Spanish explorers, some of whom had sailed to the most opulent Mediterranean cities, as far richer in buildings, population, foodstuffs, and various cultural achievements than any city in Europe, the Middle East, or North Africa.

Yet despite all that, like the Toltec, Olmec, Incan, and other large empires, it was also built by conquest over neighboring peoples and dependent on human sacrifice to gods whose theology required human blood to maintain the equilibrium of the world.

The Mexican novelist Carlos Fuentes has remarked on the epochal shift in native cultures in his country owing to Christian influence:

One can only imagine the astonishment of the hundreds and thousands of Indians who asked for baptism as they came to realize that they were being asked to adore a god who sacrificed himself for men instead of asking men to sacrifice themselves to gods, as the Aztec religion demanded.

Europeans committed many sins and outrages against native peoples, towards enslaved Africans, and towards one another in the centuries that have followed. But that does not mean that “Western Civ has got to go.” What kind of person dismisses a whole civilization? Only someone who can take civilization, Western in origin, for granted, and who is in crisis because he or she doesn’t realize how rare is a civilization that admits of self-criticism.

Rather, it’s now our task not to commit cultural suicide out of alienation and a misplaced perfectionism, but to live up to the promises of the West’s central beliefs. That process began on these shores in 1492 and has had many great and unprecedented successes amidst the failures. Not least, hope for a future of expanding freedom and justice, an American future that has astonished the world and holds out even greater things to come.

Robert Royal is the founder and president of the Faith & Reason Institute in Washington, D.C., and editor-in-chief of The Catholic Thing, an online publication that appears daily and is translated into five foreign languages. His latest book is Columbus and the Crisis of the West.