Nineteen years after the terrorist attacks of September 11, 2001, the global coronavirus pandemic has complicated our country’s commitment to “never forget.”

As President Donald Trump and 2020 Democrat nominee Joe Biden prepare to attend a brief 9/11 ceremony at the Flight 93 National Memorial in Pennsylvania, Vice President Mike Pence plans to visit both New York ceremonies — one at the September 11 memorial plaza, the other on a corner near the World Trade Center.

These two ceremonies, held in close proximity on the same day, are the result of a controversial decision by the 9/11 memorial board. For the first time since the 2001 attacks that killed nearly 3,000 Americans — many of them first responders — the tradition of reading the victims’ names has been suspended.

Many have expressed their understanding for a change in light of the ongoing health crisis, vocalizing support for the board to err on the side of caution. “This wasn’t canceled. It’s just been changed in such a way where we still get to pay tribute to our loved ones in a respectful and safe way,” Anthoula Katsimatides said.

Katsimatides lost her son, a bond trader, in the attacks on the World Trade Center. “Who expected COVID-19? … It was completely unforeseen. As was 9/11,” she added. But Jim Riches, father of one of the many firefighters lost in the aftermath, disagrees.

“It’s another smack in the face,” he said. Riches is a retired fire battalion chief, believes the decision is just one more way his country is leaving remembrance behind. “I wish they wouldn’t forget, but they’re trying to,” he said.

In response to the decision, the Tunnel to Towers Foundation arranged their own ceremony, so that family members could recite their loved ones’ names while observing social distancing guidelines. 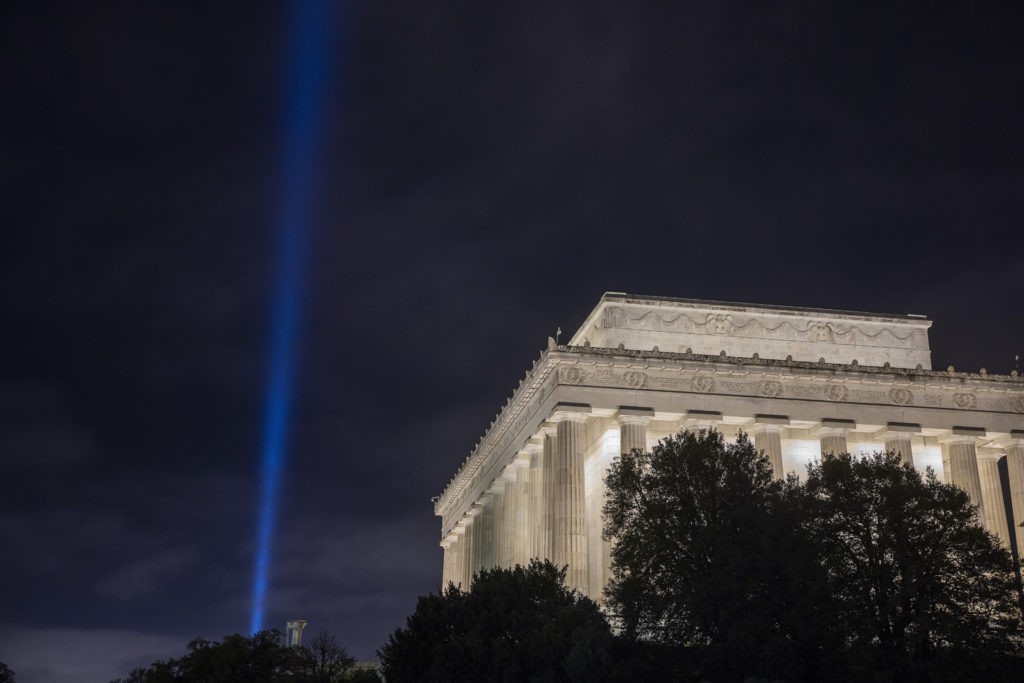 The light tribute to the 9/11 attacks on the Pentagon are scene next to the Lincoln Memorial on September 11, 2020 in Washington, DC. The display is part of a scaled back commemoration this year due to the coronavirus pandemic. (Photo by Tasos Katopodis/Getty Images)

“We need to keep letting America know what happened 19 years ago. And they need to see that emotion of the day, not a recording,” says chairman Frank Siller, referring to the Pentagon’s decision to play names by recording at its ceremony.

Even the “Tribute in Light” traditionally shone upward in the place where the twin towers of the World Trade Center stood were temporarily cancelled, with memorial board members expressing concern for health risks to the installation crew. A wave of backlash forced the board to walk the decision back.

As the country continues to grapple with the realities of a global pandemic, the furor of a heated battle for the Oval Office, and nation-wide rioting in the name of racial justice, both survivors and the families of the fallen wait to see how their country will honor their sacrifice.