President Donald Trump on Tuesday ridiculed a group of Never Trump Republicans who put together an ad criticizing his response to the Chinese coronavirus.

“I don’t know what Kellyanne did to her deranged loser of a husband, Moonface, but it must have been really bad,” Trump wrote on Twitter, referring to his advisor Kellyanne Conway’s husband George Conway who is helping lead the “Lincoln Project” — a Never Trump Republican effort to get President Trump out of the White House in 2020.

The group created an ad called “Mourning in America” telling Americans that “more than 60,000 Americans have died from a deadly virus that Donald Trump ignored,” and that America is “weaker and sicker and poorer.”

The ad has over three million views on Twitter

📺 NEW VIDEO @realdonaldtrump’s failed presidency has left the nation weaker, sicker, and teetering on the verge of a new Great Depression.

Trump mocked the team for copying Ronald Reagan’s “Morning in America” concept saying it was proof they had no imagination.

“You see, these loser types don’t care about 252 new Federal Judges, two great Supreme Court Justices, a rebuilt military, a protected 2nd Amendment, biggest EVER Tax & Regulation cuts, and much more,” he wrote, referring to his record as president.

The president noted they were all part of the loser political class who lost to former President Barack Obama and were also beaten badly by his campaign in 2016.

“I didn’t use any of them because they don’t know how to win, and their so-called Lincoln Project is a disgrace to Honest Abe,” Trump said.

Trump suggested Abraham Lincoln himself would be proud of his Republican achievements as president.

“They’re all LOSERS, but Abe Lincoln, Republican, is all smiles!” he wrote. 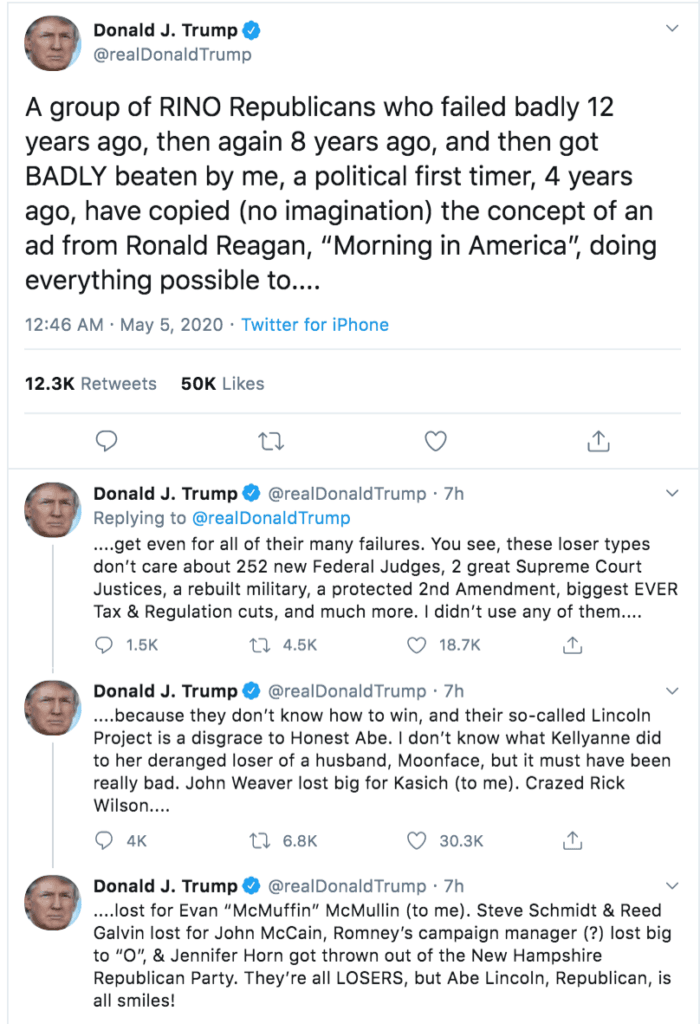