Catholic League president Bill Donohue has appealed to the House Ethics Committee to reprimand Rep. Rashida Tlaib for her “obscene assault on people of faith.”

“As president of the largest Catholic civil rights organization, I am requesting the House Committee on Ethics to issue a letter of reprimand to Rep. Rashida Tlaib,” Mr. Donohue writes in a March 16 letter addressed to Florida Rep. Ted Deutch, the chairman of the committee, and copied to the other members.

Donohue calls out Rep. Tlaib for retweeting a message from activist David Hogg including the phrase “Fuck a National day of prayer,” saying that by doing so the Michigan Democrat has “targeted entire collectivities, crossing the line by insulting Catholics, Protestants, Jews, Mormons, Muslims and people of all faiths.” 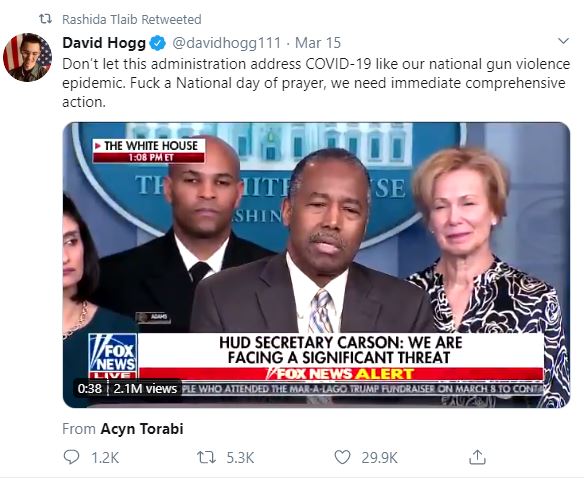 The tweet was sent out on Sunday, which President Trump had declared a National Day of Prayer for all Americans Affected by the Coronavirus Pandemic and for our National Response Efforts.

In this time, “we must not cease asking God for added wisdom, comfort, and strength, and we must especially pray for those who have suffered harm or who have lost loved ones,” the president said. “I ask you to join me in a day of prayer for all people who have been affected by the coronavirus pandemic and to pray for God’s healing hand to be placed on the people of our Nation.”

In his letter. Donohue writes that Tlaib’s “reputation for using filthy language is well known, but it is typically aimed at some person whom she loathes,” whereas in this case it is aimed at all people of faith.

“In a time when the nation is trying to come together, Rep. Tlaib is attacking the faithful,” Donohue notes. “At the very least, the House Ethics Committee should reprimand her.”

“To do nothing is to send the wrong message to millions of Americans,” he concludes.