An event with faith leaders from around the country on Tuesday in Washington, DC, focused on the importance of participation in the 2020 Census devolved into politically charged dialogue when the Rev. Nelson B. Rivers III of Al Sharpton’s National Action Network said black and brown “folk” don’t trust the Trump administration to fairly conduct the census.

“Reaching Americans where they live, work and pray is a key strategy of the U.S. Census Bureau as it begins the once-a-decade count of everyone who lives in the United States,” the Bureau said in announcing the event. “Preachers, priests, rabbis and imams are trusted voices in their communities, and many are joining the Census Bureau to spread the word that responding to the 2020 Census is easy, safe and important for their communities.” 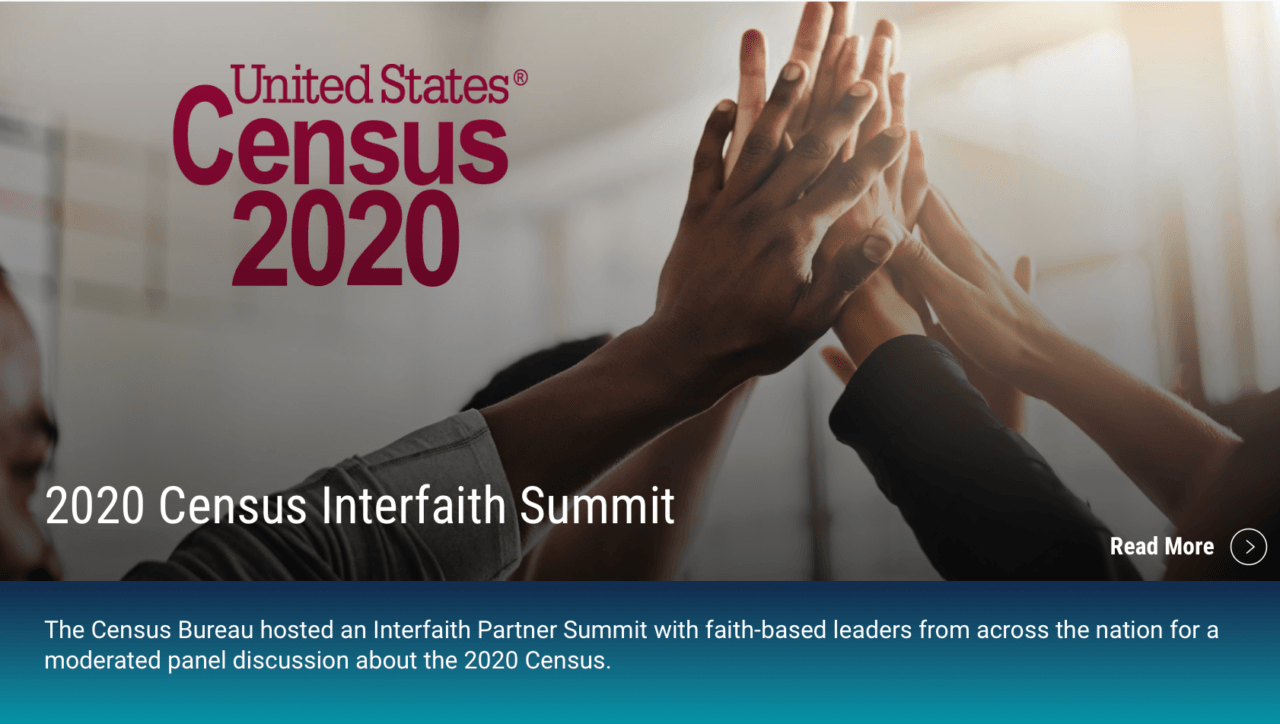 Courtesy of the U.S. Census Bureau

The panel discussion included the repeated fact that all of the information gathered from the census is only used for statistical data and personal information is strictly protected, as required by the Constitution and codified under Section 13 or the U.S. Code.

But when the audience was invited to pose questions, Rev. Rivers accused the Trump administration of not being trustworthy in conducting the census.

“If you’re black or Latino in America and you’re not paranoid, you need to question your sanity,” said Rivers, who aside from being pastor of Charity Missionary Baptist Church, North Charleston, South Carolina, also serves as vice president for religious affairs and external relations at NAN. “To be paranoid is a natural response to being black and brown in this country.”

“It’s exacerbated now because we talked a lot about what 13 says, what the policy says,” Rivers said.

“But I’m from a community that realizes the policy depends on who’s enforcing it. And right now we have a guy who’s demonstrated that the law doesn’t mean jack to him,” Rivers said, referring to President Donald Trump, Attorney General William Barr, and the handling of the sentencing of Trump ally Roger Stone for a witness tampering conviction.

“And if you can influence how the Justice Department behaves, you have a hard time telling folk, ‘trust the government’ or ‘trust the lawyers,’” Rivers said, “but to diminish the fact that we really do have a different government than we had in 2010.”

“We have a disdain for what was considered protocol and order,” Rivers said. “So as we deal with this, we really have to address the fact that folk are not paranoid unreasonably.”

“They have real good reason to not trust what we’re saying,” Rivers said, adding that officials should not dismiss people as having “unreasonable responses to a very real threat.” 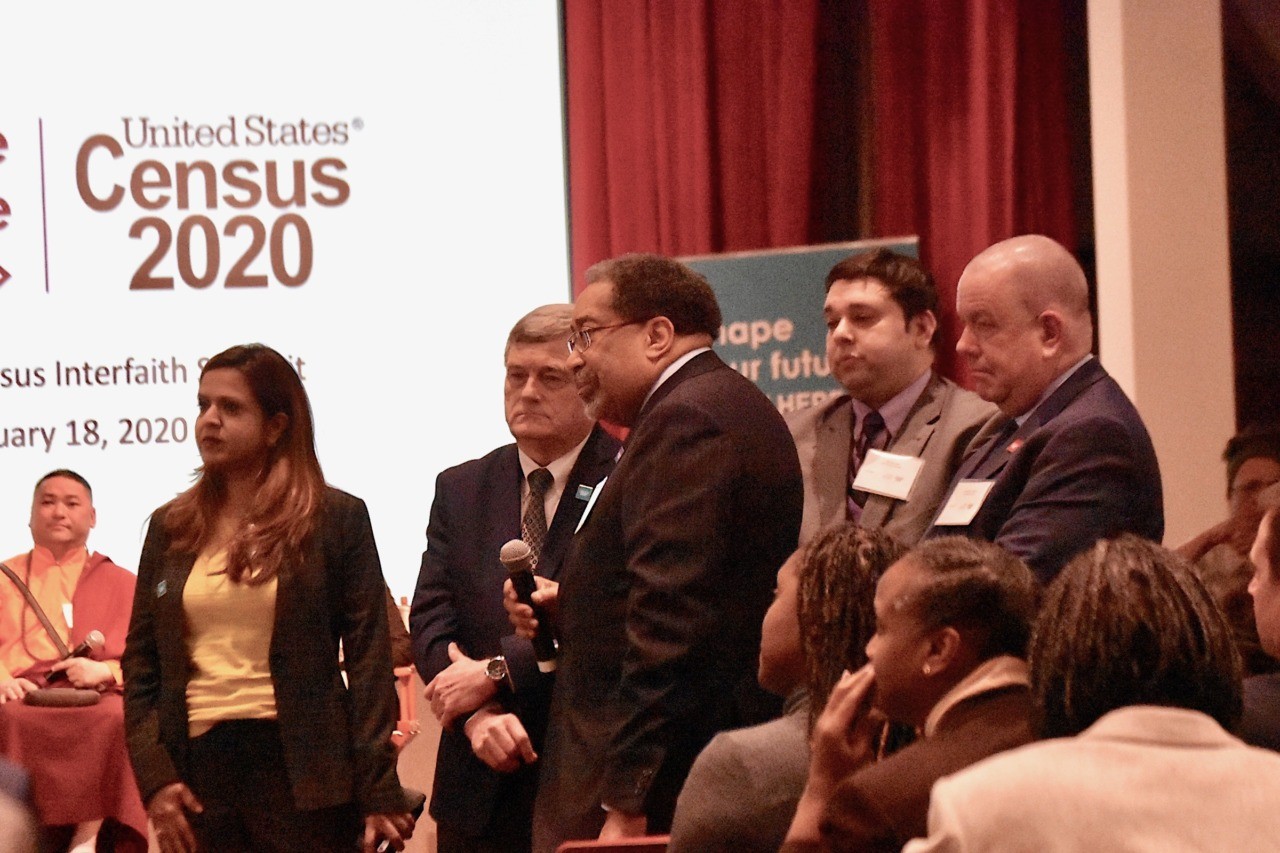 Steven Gillingham, the director of the U.S. Census Bureau (center) listens with other members of the bureau as a representative from Al Sharpton’s National Action Network complained about the Trump administration’s ability to conduct the 2020 Census. (Penny Starr/Breitbart News)

Although U.S. Census Bureau Director Steven Gillingham gave brief opening remarks at the start of the event, he remained at the event and requested a microphone so he could respond to Rivers.

Gillingham asked several members of the “team” he works with to stand up and called their work with a bureau a “lifetime dedication.”

“We have a proven track record,” Gillingham said. “And I can assure you that not only does the law require us to do our job professionally and protect confidential information, and we have all the systems in place — the most sophisticated systems available to protect the information — and by the way, I don’t have access to the information.”

“There’s no more trusted voices than the religious leaders in this nation,” Gillingham said.

But Rivers was not dissuaded and said that the fact that all the team members who stood up were male, “that’s a part of the optical problem,” and it is “time to put women in charge.”

His remarks drew the attention of Shagufta Ahmed, with the National Partnership Program (NPP) at Census, who took the microphone next to explain that she was in charge of the first-ever national convening of faith leaders for a census.

She also credited her bosses Chief of the NPP Robin Bachman and Deputy Chief of NPP Anna Owens.

“These are the three strong women that are leading this faith initiative,” Ahmed said.

And, she said, as is the case in faith traditions across the country, women are in the forefront.

“So all these men are standing behind these women,” Ahmed said.

The event, held at the Washington National Cathedral, was meant to educate the faith community and the populace at large about the importance of the decennial census, required by the Constitution, including:

More information is available at 2020Census.gov.