Members of the Afghan Special Security Forces (ASSF) — the country’s primary fighting unit against the Taliban — are partnering more with American and coalition forces instead of becoming independent, a U.S. government watchdog testified recently.

Special Inspector General of Afghanistan Reconstruction (SIGAR) John Sopko testified during a February 11 Senate hearing that the ASSF are conducting fewer missions by themselves, despite the spending of hundreds of millions of U.S. taxpayer dollars to train them.

“We’ve put a lot of money in that. But the number of independent missions that the Afghan special forces are doing has gone down,” he said Tuesday during the hearing, which was convened by Sen. Rand Paul (R-KY).

The report also said although enemy-initiated attacks during the fourth quarter of 2019 reached the highest level than any fourth quarter of any year since the attacks started being tracked in 2010, the ASSF were conducting fewer ground operations at the same time than the rest of 2019.

Asked by Sen. Josh Hawley (R-MO) if there were any trends that show that the Afghan security forces would be one day able to fend off the Taliban and other terrorists itself, Sopko responded there was no way to tell.

Since 2002, the U.S. has spent almost $86.4 billion to help the Afghan government provide security in Afghanistan, according to SIGAR’s report.

For 2020, Congress has appropriated more than $4 billion to train Afghan forces, and authorized nearly $730 million of that for Afghan special operations forces.

SIGAR said they began tracking the number of independent ASSF operations after the Pentagon began using it as an important success indicator for the Afghan forces and the effectiveness of the U.S.’s “small-footprint military campaign” in Afghanistan.

A spokesman for the U.S.-led training mission said Afghan special operations forces did roughly the same amount of independent operations in 2018 and 2019, but increased partnered operations beginning around June 2019 to put more pressure on the Taliban and other terrorists — accounting for the higher percentage of partnered operation.

“This reflects an increase in ASSF capability rather than an inability to operate independently,” he told Breitbart News in an email. 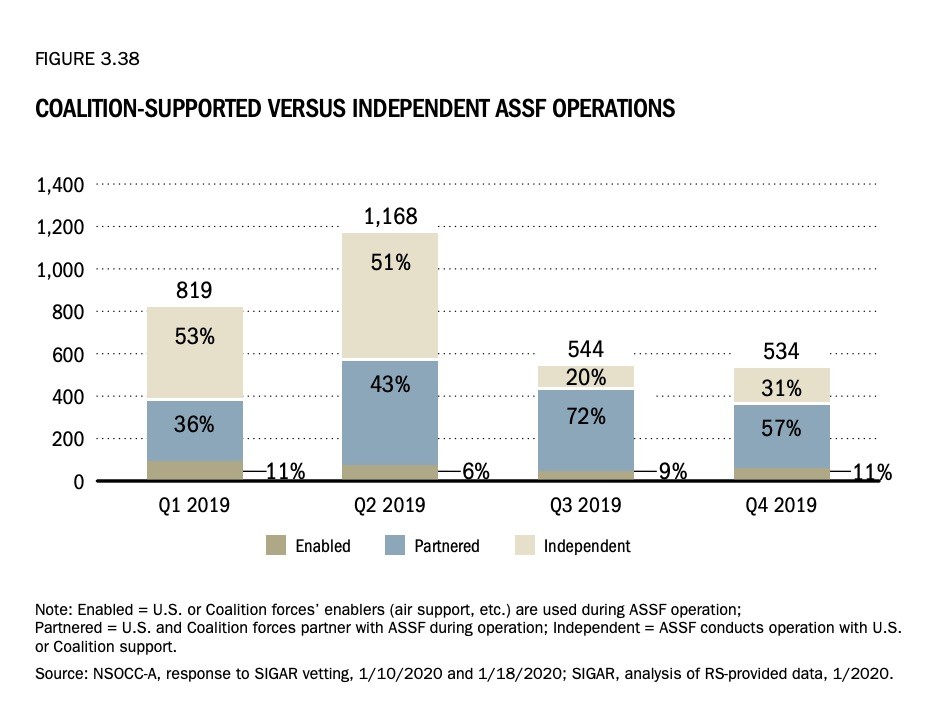 Compared to statistics in a Defense Department report, the ASSF appears to have conducted more operations during roughly that same period in 2018, both in independent and partnered operations.

Sopko predicted that the data on Afghan special operations forces would probably not be available in the future since it seemed that metrics that showed negative progress in the war either get abandoned or become classified.

“Now, I am not a betting person, but I will bet you that next quarter, that database will be classified, because every time we find something that looks like it’s going negative, it gets classified or it’s no longer relevant,” he said.

According to SIGAR’s report, the information about Afghan forces that have become classified or no longer publicly releasable includes casualty figures, total numbers, and performance assessments.

Sopko said it is not even known how many Afghan soldiers and police there are and the U.S. is paying for.

“Apparently, it’s all secret, classified and I can’t tell you what the results are. … We have a whole list of everything that’s been classified and it keeps growing,” he said.

The observation prompted Hawley to question how Congress could perform oversight without access to such data.

“That’s the point we’ve been trying to make over the last five or six years,” Sopko responded.

Sopko also testified there is some concern that the Afghan special operations forces were being overused or “burned up” — which,  with more partnered operations, could be taking a toll on their trainers, the Army Special Forces.

According to a U.S. Army website, Afghan special operation battalions, or “kandaks,” are primarily built and developed by Army Special Forces.

Twelve of 18 American combat deaths in Afghanistan since 2018 were Special Forces soldiers — or 67 percent.

Sen. Paul said in his opening statement at the hearing:

Congress needs to vote on whether to continue the war in Afghanistan. One generation cannot bind another generation to war and should not. We now have soldiers fighting who were born after the 9/11 attacks. We need to reexamine what our mission is in Afghanistan.

Dan Caldwell, senior adviser to the conservative organization Concerned Veterans of America, noted there were so many members of the public at the hearing there was standing room only but that less than a handful of senators showed up.

“That’s incredibly disappointing to me. This is the nation’s longest war, we still have Americans dying and being wounded in Afghanistan almost on a weekly basis,” he said. “This should be a priority issue for every single senator.”

He said the data about Afghan special operations forces caught his attention. “That’s one of our priority training missions. And that shows me that our current strategy there around training Afghan security forces is failing.”