Bloomberg made the comments during an Aspen Institute speech in 2015.

It’s controversial, but first thing is all of your — 95 percent of your murders, and murderers, and murder victims fit one MO. You can just take the description, Xerox it, and pass it out to all of the cops. They are male, minorities, 15 to 25. That’s true in New York, it’s true in virtually every city in America. And that’s where the real crime is you’ve got to get the guns out of the hands of the people that are getting killed.

Bloomberg defended the practice of putting more cops on the street to “stop and frisk” minorities who were getting arrested for marijuana possession.

He argued that stop and frisk prevented young minorities from carrying guns in New York City.

“And the way you get the guns out the kids’ hands is to throw them up against the wall and frisk them,” he said.

The president tweeted the video calling Bloomberg a racist and then deleted it. 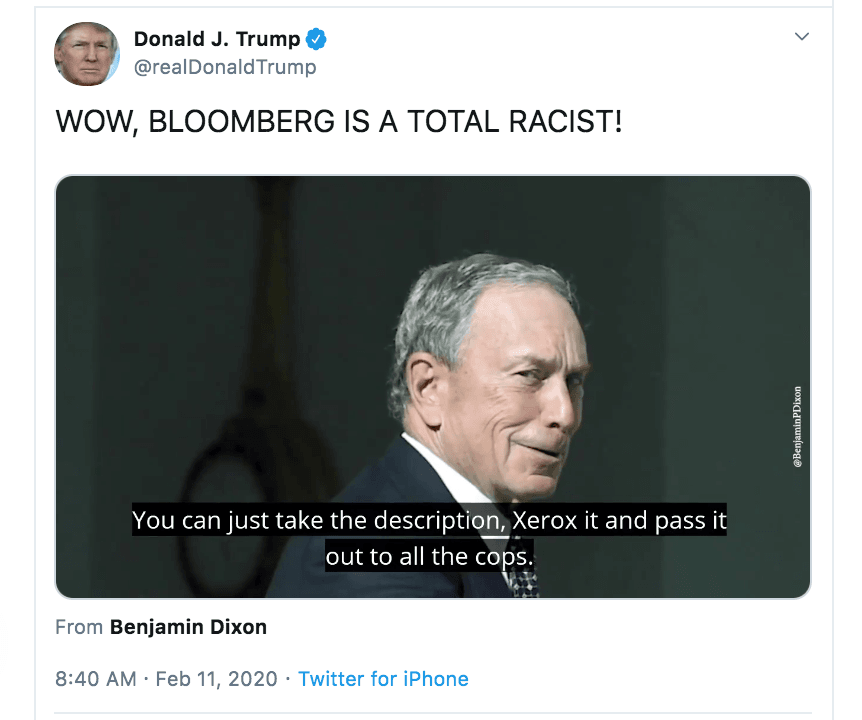 Donald Trump tweets that Michael Bloomberg is a racist

Breitbart News reported on the audio in 2015, including comments he made about gun ownership.

At the time, Bloomberg asked the Aspen Institute not to release video footage of his speech that was deemed politically toxic,  a request that was granted, although the audio of the speech has leaked.