“Proactively share your pronouns to foster an environment of respect and awareness (ex: “Hi, I’m Karen! My pronouns are she/hers. Welcome to the team!”),” Goldman directed its staffers November 22.

The company’s “diversity and inclusion” group posted the document on November 22, instructing employees to stop using pronouns which recognize the average biological, physiological, and psychological distinctions between men and women:

Tips for Being an Inclusive Ally

Pronouns should not be assumed by someone’s name or gender expression (i.e. physical appearance).

Made a mistake? Don’t make a big deal out of it or draw extra attention to it; instead, make a swift apology and use the correct pronoun(s) moving forward.

Practice using gender-neutral pronouns on your own time. Feeling comfortable with these terms does not happen immediately and can require concerted effort.

Recognize that some people go by multiple sets of pronouns, while others may choose to only use their name and eschew pronouns completely.

It is usually acceptable to use the “They / Them” pronoun set when referring to someone who has not expressly stated their pronouns.

To publicize the new pro-transgender policy, the company released a video where transgender activists pressured company employees to drop their recognition of the two sexes. The activists then urged employees to accept the transgender ideology, which insists that women must let men freely slip into women’s identity, status, and private spaces.

The three activists featured in the video used poll-tested language to divide and profile the company’s workforce as either “allies” or non-allies — such as enemies.

They also threatened lawsuits against people who want to maintain popular distinctions between men and women.

The trio also demanded public submission by women and men — but they offered nothing in exchange for their revolutionary demand that people must ignore the biological distinctions between men and women.

For example, Sarah McBride, an advocate at the pro-transgender Human Rights Campaign, told the panel of unenthusiastic employees that they must enforce the gender-trumps-sex rule in the hallways and around the water-coolers, or else Goldman Sachs employees may attack other employees;

An inclusive workplace environment goes beyond [company] policies and practices. It includes the everyday reality for transgender people; Whether they feel safe bringing their whole selves to work, whether their colleagues are inclusive and supportive, whether they’re hearing jokes in the hallways or around the water cooler. Those are integral parts to making sure the workplace is inclusive, and all of us, whether we are trans or not, can play an active role in making sure our workplaces are inclusive, and I think so often when we talk about allyship, it is so important to remember that that includes actions, and we need our allies to put something on the line. Oftentimes, that is their comfort, and most commonly that is going to be making sure that when they hear a comment or a joke — that even unintentionally demeans transpeople — that they speak out because those little indignities in the workplace, those can create a culture where more pervasive discrimination — or even violence — can occur. 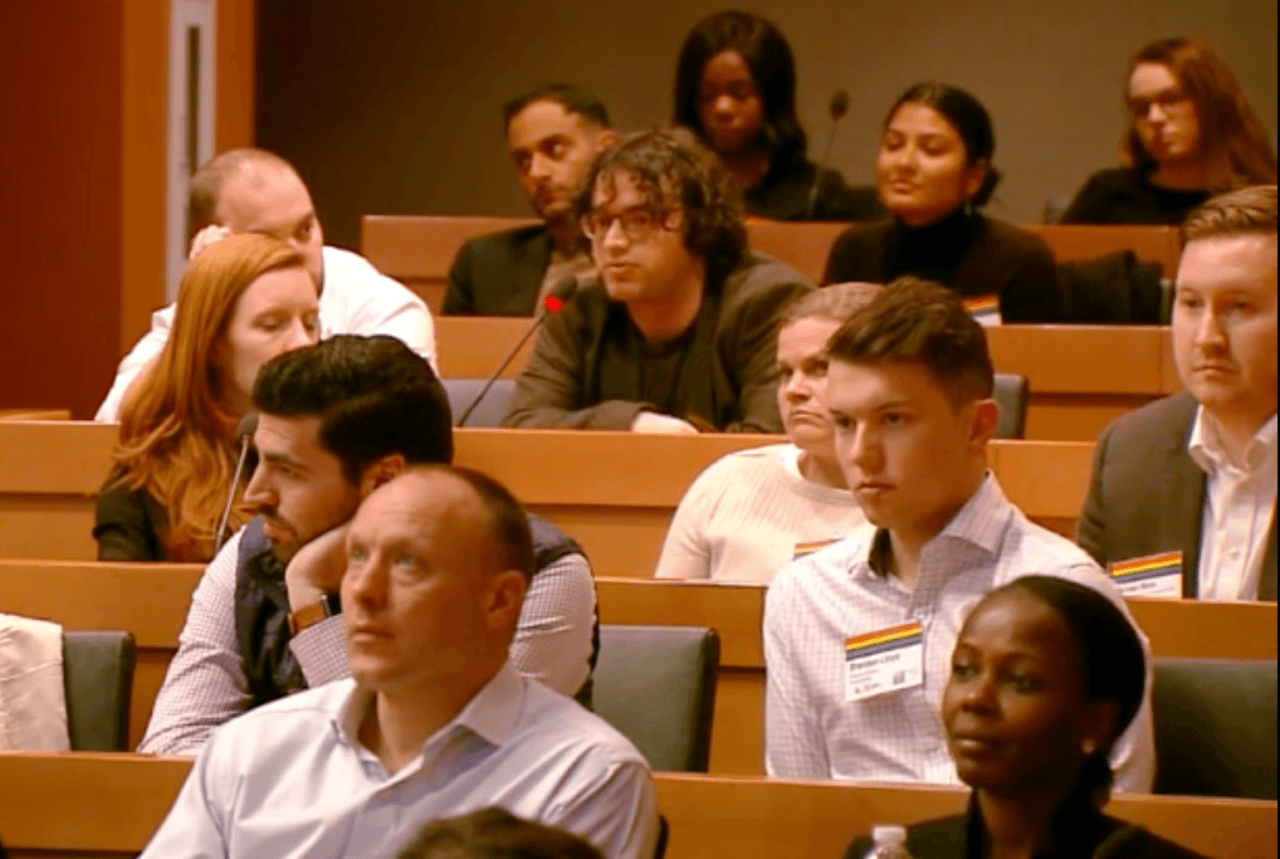 Goldman Sachs employees watching the “Bringing Your Authentic Self to Work: Pronouns” presentation

The activists did not provide any physiological and biological claim that men who live as women are actually women. “Gender identity is a very deeply held belief in your own gender … it is not just a preference or a whim, it is really a very deeply held feeling,” said Jillian Weiss, an attorney who also said the new transgender focus creates legal risks for company employees.

A Goldman employee who is living as a woman argued company employees want to repent when they are rebuked for not appropriating women’s pronouns while speaking to a transgender man. “The natural inclusion is to get defensive and to say, ‘I’m really an ally, and I’m trying really hard, and I only want the best for you,'” said Katie Krasky. 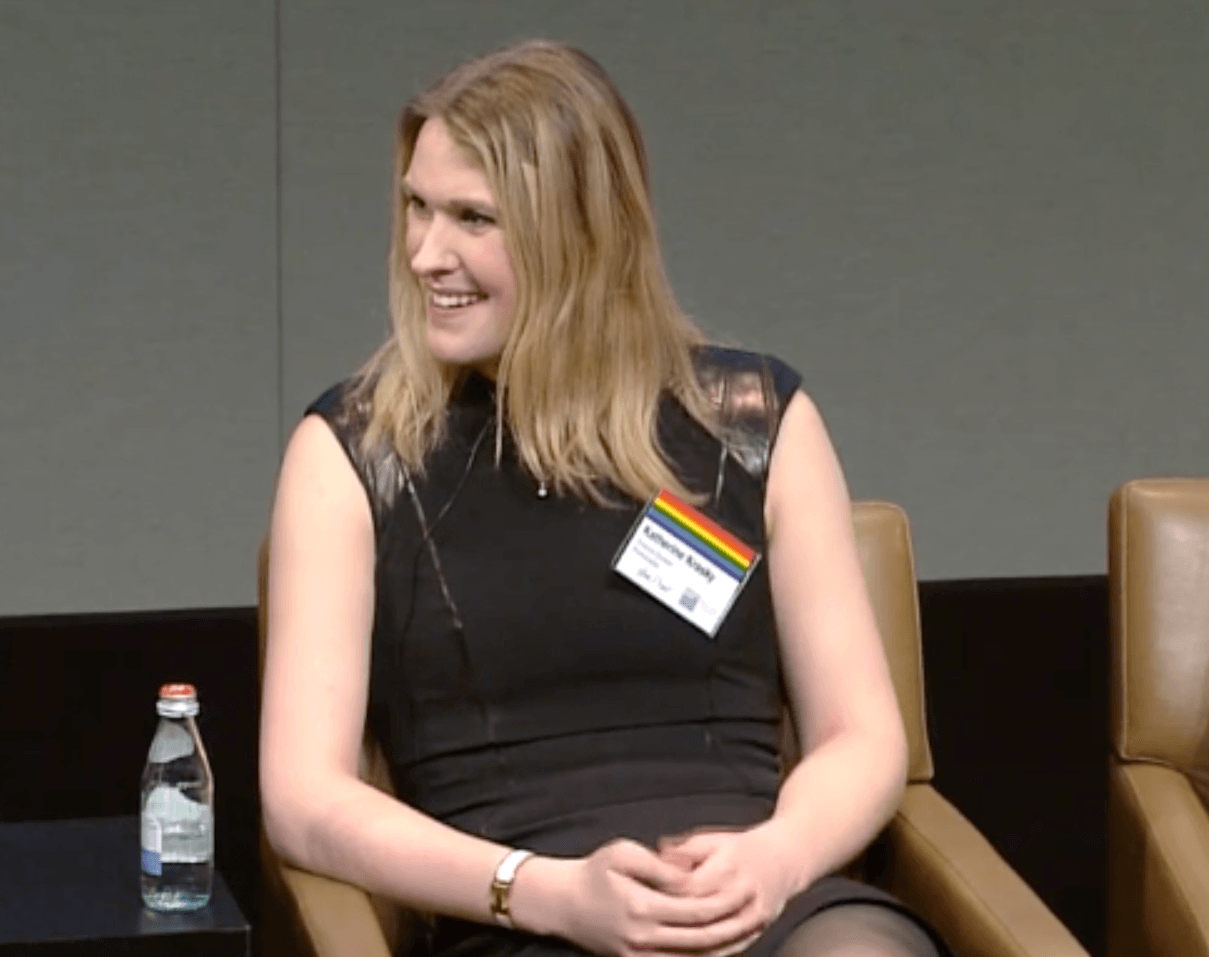 Amid the threats, McBride claimed moral superiority over the majority of Americans who do not want to transfer female pronouns to men, “We’ll demonstrate the grace that is required to allow you to grow.”

“The only way that we can address these issues …is if we are truly increasing inclusive spaces for everyone,” said McBride, who pointedly ignored the majority of Americans who recognize the complementary biological differences among men and women.

Throughout the presentation, the man who presented the panel was eager to please the activists.  “Love that, absolutely love that,” said Gary Giglio, a regional manager. “If someone uses the wrong pronoun, say something to that person, pull them aside in private, say something, or if you have to do it publicly … all that is incredibly, incredibly important,” he warned the audience.

The company’s top executives are adopting a pro-diversity policy to help hire more women. But the managers have not reconciled their pro-woman policy with the emerging policy of forcing women to surrender their female identity to men who insist they are women. In July, Fortune reported:

Nine months into his new role as the CEO of the storied Wall Street firm, David Solomon says that diversity has become one of the company’s top priorities.

“As a leader, you have to push on the things that make a company a more desirable place for people to be,” Solomon said. “One of the things that I’ve been very focused on since I became CEO is really making sure people know that a hugely important agenda item of mine is to improve the diversity and inclusiveness in this organization. I’m really taking it on in as forceful of a way as I can because it’s a business imperative and it’s right. It’s time for us to progress on this. It’s a big part of who we are as a firm.”

Numerous data shows that transgender men comprise less than 1 percent of the population, and only about 10 percent of the men undergo expensive cosmetic surgery to reconfigure their genitalia.

Gay men, lesbians, and feminists are increasingly joining with conservatives to speak out against the transgender demand.

“Sisters, when a man puts you under constant surveillance and retaliates whenever you say no, and huffs about being indispensable, and he makes you lie to spare his feelings, and he always puts you in the wrong — no matter what — that is not a partnership,” said Natasha Chart, a New York feminist. “I will not be forced to lie. I will not submit. It’s abuse.”

I have said that trans-identified males are male. Because they are. This is not a judgement or an insult, it is simply a material reality — a biological reality. If you are born male, you remain male for life. Everyone knows this. It is not a belief or an opinion, it is a fact.

The entire language of the trans activist movement has taken up the erasure of women in order to accommodate a tiny minority of people who would like us all to pretend that material reality doesn’t exist. We are no longer women, but ‘cis women’, which means, supposedly, we are women who ‘identify with the gender assigned to us at birth’.

Over and over again, I ask those who insist that “transwomen are women” what the word “woman” means. They refuse to answer. They simply say, “It’s a person who identifies as a woman,” which essentially means, “it’s nothing at all” — it is anything anyone says it is.

On what basis do women’s rights exist, if the word “woman” is meaningless? If anyone can identify in and out of femaleness on a whim?

If we wish to maintain women’s rights and protect women’s spaces, we cannot separate women from femaleness. It is irrational and dangerous. It makes women and girls vulnerable. Beyond that, there is absolutely no reason why we can’t protect the rights of individuals to step outside gender roles, and to express themselves as they like, and also understand that sexual dimorphism is real, that males and females exist, and that those differences matter.

Feminist speaker stares down jeering swarm of pro-transgender progressives: "On what basis do women’s rights exist, if the word 'woman' is meaningless?" https://t.co/053YOQNd0j

Despite claiming to oppose stereotypes, the transgender ideology is based on tight stereotypes about women and men. For example, McBride told the Goldman employees that men who like to cook are “gender non-conforming.”

In contrast, conservatives recognize the clear physiological distinctions between men and women while also understanding the wide range of overlapping preferences and characteristics among men and women. The best way to accommodate the competing complexities, says conservatives, is to embrace a mixture of customs, science, laws, and jurisdictions which try to balance personal freedoms and average sex-related differences.

In general, the transgender ideology says a person’s legal and civic recognition as a man or a woman must be determined by their “gender identity,” not by their biology.

The ideology also insists that men and women are more or less interchangeable, and it objects to the public’s view of the two sexes as simultaneously different, complementary, and equal.

The transgender advocates want to impose their ideology on Americans by establishing “transgender rights” laws. The laws would require the Department of Justice to penalize individuals and groups, which insist that biology shapes male-or-female bodies — and peoples’ likely political, civic, and personal priorities.

Multiple polls show that most Americans reasonably wish to help and comfort people who think they are a member of the opposite sex. The polls also show that the public rejects the transgender ideology’s claim that people’s legal sex should be determined by their feeling of “gender identity,” not by biology. A U.K. survey shows a similar mix of sympathy for people who say they are transgender alongside deep opposition to the ideology.

The transgender movement is diverse because the different factions have competing goals and priorities.

It includes sexual liberationists, progressives, and people who glamorize the differences between the two sexes. It includes high-profile children, people who are trying to live as members of the opposite sex, troubled teenage girls trying to flee womanhood, parents eager to describe their children as transgender rather than homosexual, and people trying to “detransition” back to their sex,

It also includes feminists who wish to blur distinctions between the two sexes, men who demand sex from lesbians, masculine autogynephiles who desire validation from women, alpha males who insist they are the natural leaders of women. Other supporters include wealthy donors, politicians, political professionals, revenue-seeking drug companies, surgeons, psychiatrists, and medical service providers.

Transgender advocates claim that two million Americans say they are transgender to a greater or lesser extent. But very few people who describe themselves as transgender undergo cosmetic surgery of the genitals. Only about 4,118 Americans surgically altered their bodies in hospitals from 2000 to 2014 to appear like members of the opposite sex, according to a pro-transgender medical study. A Pentagon report commissioned by former Defense Secretary James Mattis said that “rates for genital surgery are exceedingly low- 2% of transgender men and 10% of transgender women.”