British veterans of the World War II Normandy landings are getting ready to honor the fallen less than a month before the 75th anniversary of D-Day.

The Royal Hospital Chelsea is encouraging residents who took part in what became known as Operation Overlord to share their stories, to preserve their legacy for the future.

They are the last of their generation – among more than 60,000 British soldiers who stormed the beaches of Normandy in a pivotal moment that marked the beginning of the end of combat operations in Europe.

In all,  300,000 Allied troops in front line and support roles launched the counter-invasion of France with a combined sea, land, and air assault on June 6th, 1944.

D-Day saw some 156,000 U.S., British and Canadian combat forces landing directly on five beaches along a 50 mile (80 kilometer) stretch of France’s coast, supported by thousands of ships, landing vessels, planes and gliders, and with inland help from French resistance fighters.

While the majority of soldiers landed on the Normandy beaches, special forces troops including British paratroopers made precision landings behind enemy lines at locations including the Bascule bridge over the Caen canal, a location which came to be known as Pegasus Bridge.

The operation prevented German armour being rushed to the front to repel the landings and remain one of the most imagination-capturing battles of the war.

The few who survived the landings on Utah, Omaha, Gold, Juno and Sword beaches are all now at least in their 90s.

Veteran Bill Fitzgerald told the Forces Network of what was his first experience of battle: “When I was 16 years of age living in London I was in the Army cadets. As far as firing and using a rifle and stuff like that I was ok, you know. 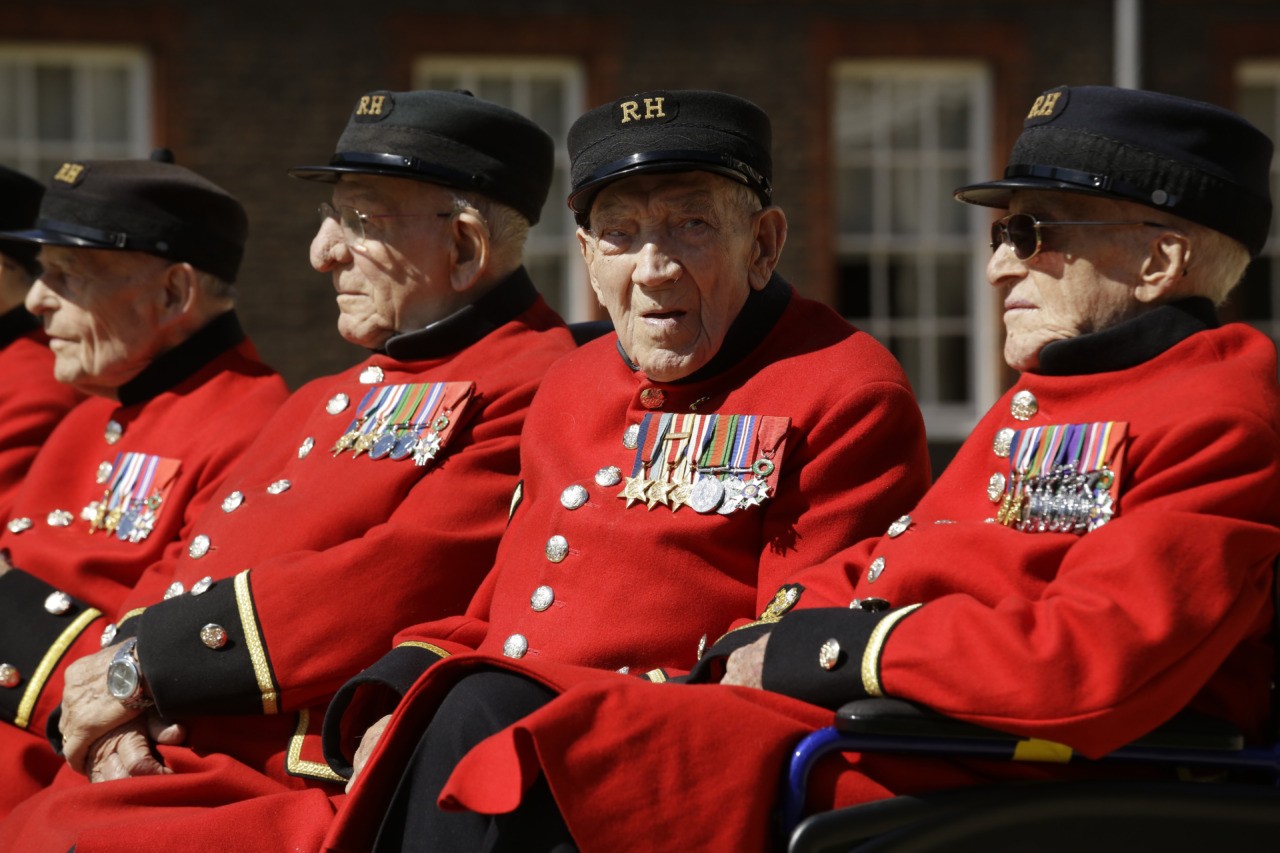 British Chelsea Pensioners who are veterans of the World War II Battle of Normandy, codenamed Operation Overlord, and D-Day pose for a group photograph during a D-Day 75th anniversary photocall at the Royal Hospital Chelsea in London. The 75th anniversary of D-Day is on 6 June, pictured are from left: Ernie Boyden, Frank Mouque, George Skipper and Arthur Ellis.  (AP Photo/Matt Dunham)

“To see all those bodies in the water and losing some of your friends, it wasn’t very nice. You get no advance [notice] of what’s going to happen.”

Shelled during a campaign in France on June 15, Mr. Fitzgerald said he did not finish the war and was sent to the Royal Hospital Chelsea.

He said: “We had a horrible day fighting and the tanks decided to stop in the woods. Believe me they shelled the hell out of us. All I can remember is getting a shell very near me, going up into the air and coming down and one of my friends putting my helmet over my face.’

His femur was broken in half and he was flown back to London on June 17.

James George was also there on D-Day.

“I try to forget about it really, that something had happened, and it will always be with me,” he said. 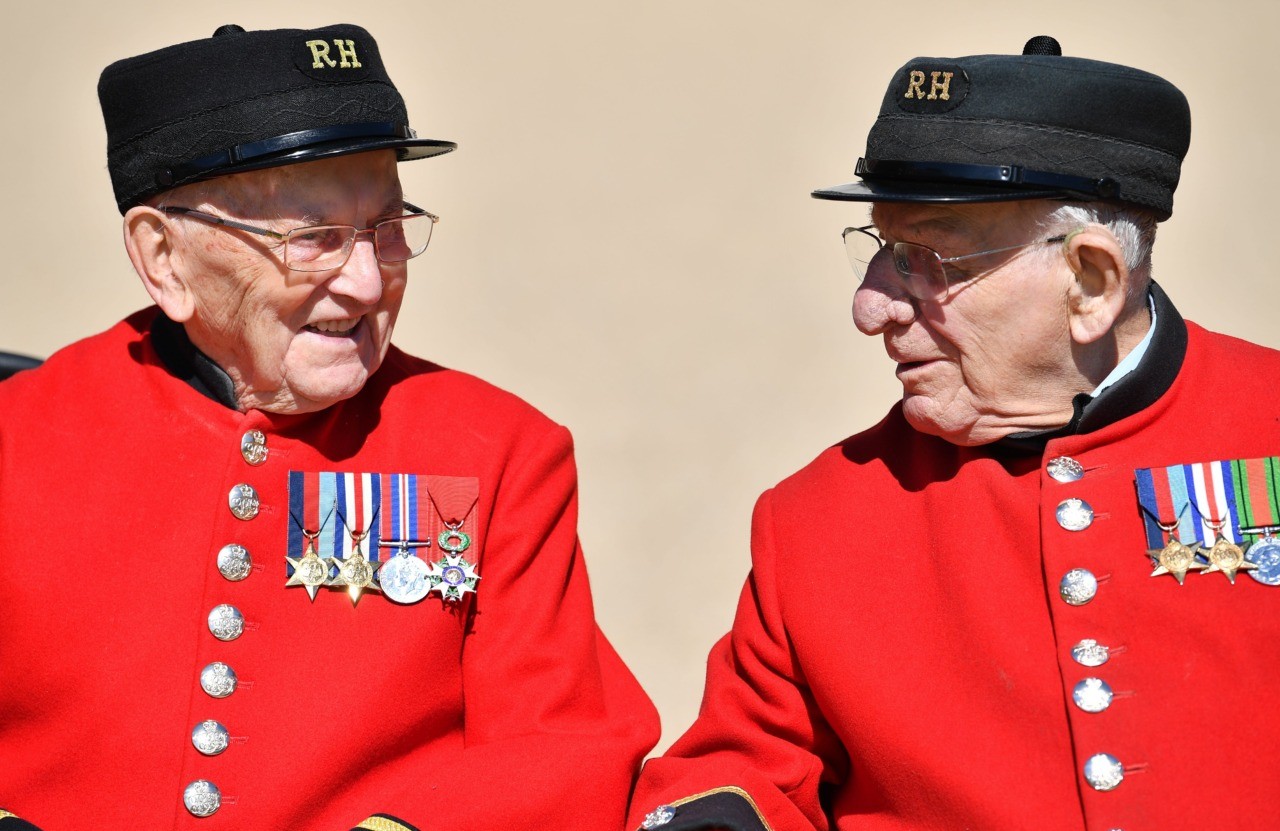 Chelsea Pensioners who took part in World War Two Battle of Normandy and D-Day veterans Bill Fitzgerald (L) and Fran Mouque (R) pose for a photograph at The Royal Hospital Chelsea in London on May 13, 2019. ( BEN STANSALL/AFP/Getty Images)

U.S. President Donald Trump will visit the UK and France next month ahead of the commemorations of the Normandy landings.

The president’s primary purpose of the European visit is to recognize the 75th anniversary of D-Day, as he will travel to Normandy to observe the anniversary at the American Cemetery at Colleville-sur-Mer. He will also meet with French President Emmanuel Macron.

Trump will also visit Queen Elizabeth II and Prime Minister Theresa May during a visit to the United Kingdom and also recognize D-Day at a ceremony in Portsmouth.

The European trip will take place from June 3 to June 6.