There are nearly 60,000 illegal aliens, legal immigrants, or suspected foreign-born inmates in the federal prison system, a report by the Department of Justice (DOJ) reveals.

In total, there are about 59,945 illegal aliens, legal immigrants, or suspected foreign-born inmates in federal custody by the Bureau of Prisons and United States Marshals Service, the DOJ report notes, as of 2018.

Of that total, about 41,138 were confirmed illegal aliens who have either been ordered deported from the U.S. once they are released from federal custody or who are under adjudication proceedings to be deported. Illegal aliens make up about 68 percent of the total foreign-born federal prison population.

There are 16,426 suspected foreign-born federal inmates who are under investigation to determine their immigration status, while there are nearly 1,300 legal immigrants in the federal prison system who have ongoing deportation proceedings, as of 2018. Legal immigrants account for about two percent of the total foreign-born federal prison population. 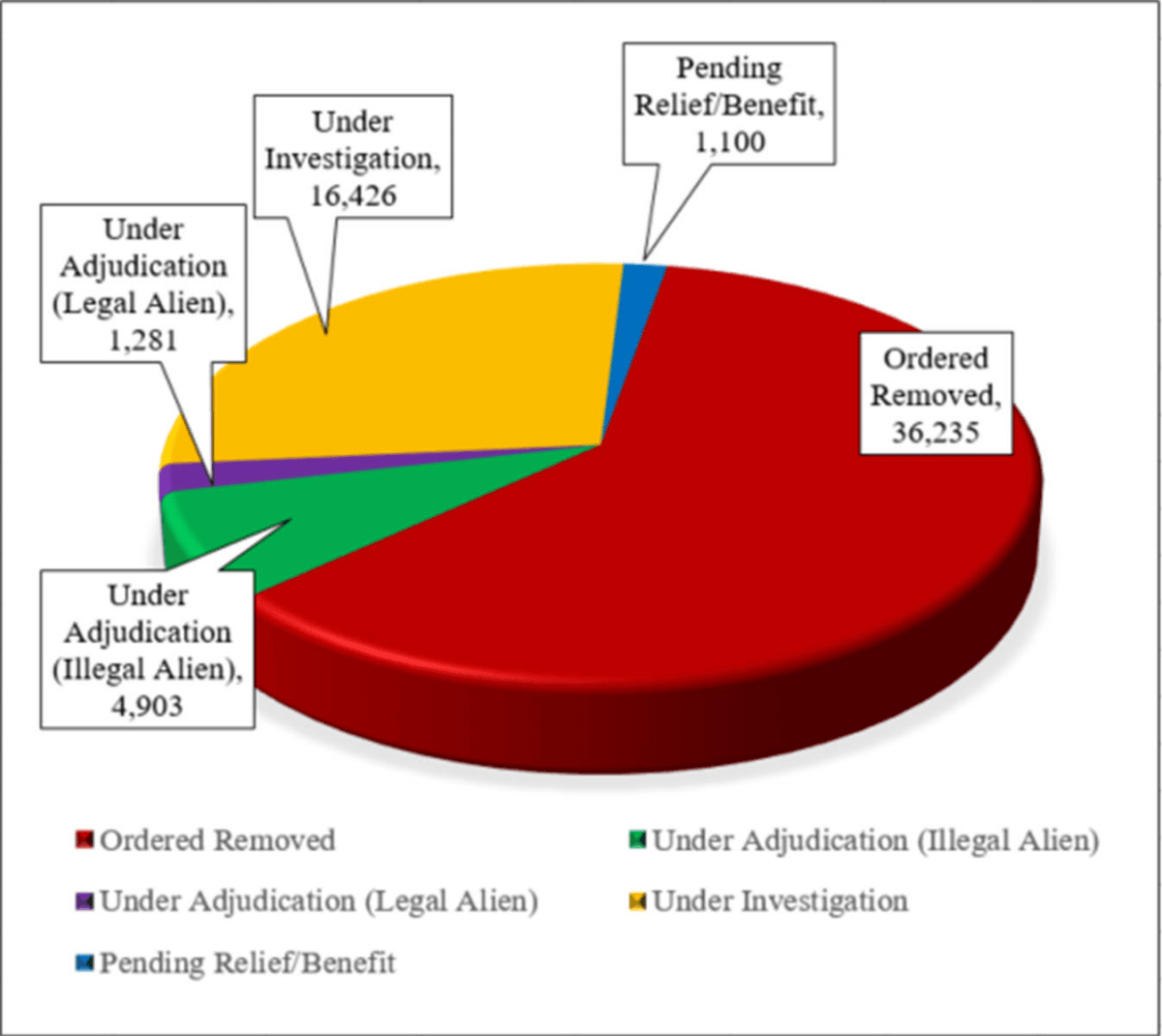 The federal foreign-born inmate population includes illegal aliens like MS-13 gang member Bryan Galicia Barillas, who was sentenced to 22 years in federal prison recently after he was involved with the killing of an innocent mother of three in Chelsea, Massachusetts. Barillas also pleaded guilty to his involvement in the 2014 stabbing murder of an individual in Chelsea, as well as an attempted stabbing and conspiracy to murder in 2015.

Also in federal custody is 23-year-old illegal alien Yovanny Aroldo Mendivil-Balderama, who was recently sentenced to 50 years in prison for distributing methamphetamine across the state of Missouri and for his involvement in the murder of Oscar Adan Martinez-Gaxiola in 2016.

Of the nearly 39,000 foreign-born inmates in Bureau of Prisons custody, about 46 percent had been sentenced for drug-related and drug trafficking crimes. About 28 percent were in federal custody for immigration violations, such as illegal re-entry or human trafficking.

As Breitbart News has reported, foreign-born inmates in federal custody cost American taxpayers about $1.42 billion every year, according to the most recent data collected by the Government Accountability Office (GAO).

Though federal data is not compiled on the total foreign-born populations in state and local custody, a recent Federation for American Immigration Reform (FAIR) study found that illegal aliens are sometimes up to 5.5 times more likely to be incarcerated than American citizens and legal immigrants.

In New Jersey, for example, illegal aliens are 440 percent more likely than American citizens and legal immigrants to be incarcerated.

Every year, the U.S. admits more than 1.5 million foreign nationals, with the vast majority deriving from the process known as “chain migration,” where newly naturalized citizens can bring an unlimited number of foreign relatives to the country. By 2023, the Center for Immigration Studies estimates that the legal and illegal immigrant population of the U.S. will make up nearly 15 percent of the entire U.S. population.