The House Western Caucus took on Democratic Socialist Rep. Alexandria Ocasio-Cortez’s (D-NY) Green New Deal at a hearing and press conference on Wednesday where they exposed the so-called climate change resolution that aims to transform the country’s economy and infrastructure.

Rep. Paul Gosar (R-AZ), chairman of the caucus, called it a “socialist manifesto,” but some of those testifying at the hearing went further.

“We will no longer be America if this is done,” Rick Manning, president of Americans for Limited Government, said. 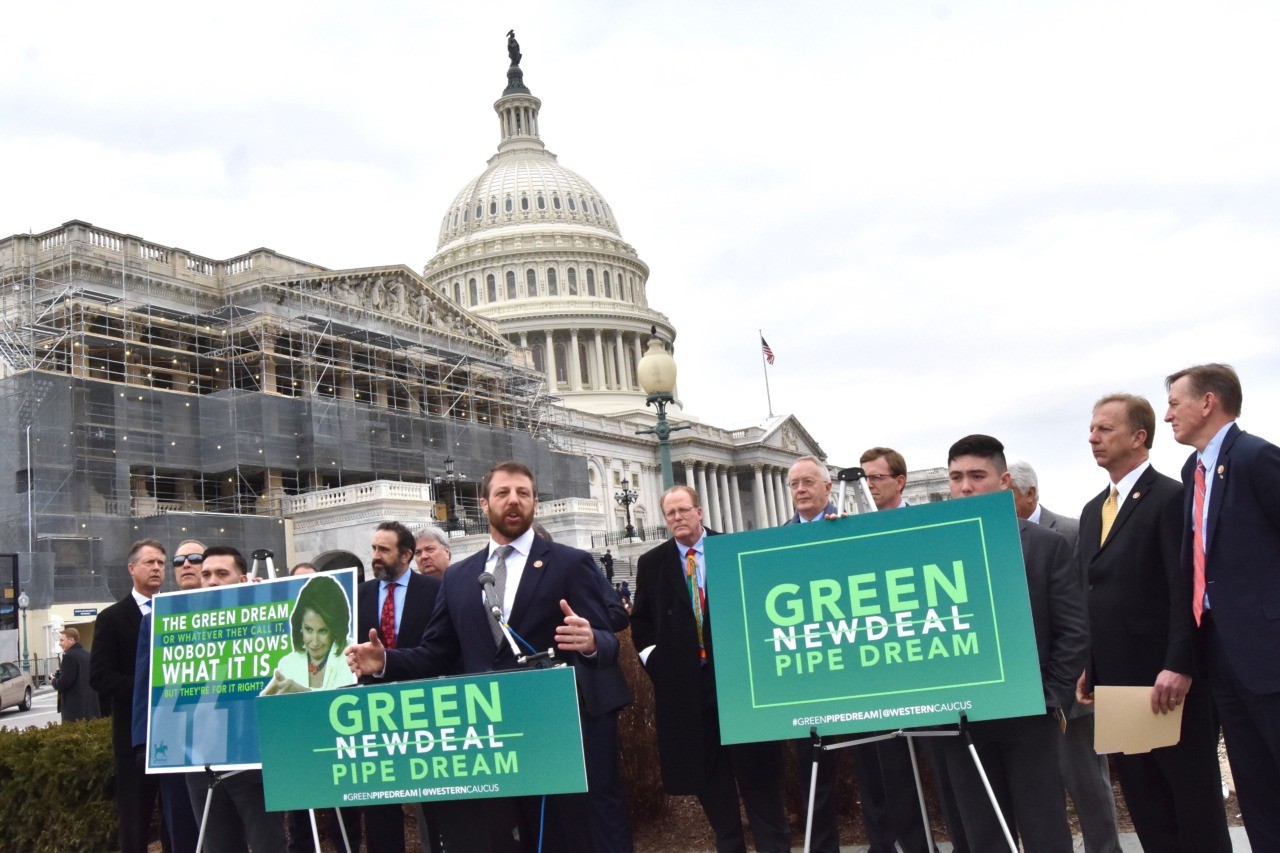 Rep. Markwayne Mullin (R-OK) pointed out at the press conference at the Capitol on Wednesday that while many have reacted to the Green New Deal with incredulity, it should be taken seriously. (Penny Starr/Breitbart News)

The radical resolution, which was referred to at the hearing as a “pipe dream,” has been embraced by many Democrats, including some who hope to challenge President Donald Trump in the 2020 election. It calls for ending air travel, the production of fossil fuels, and “social justice” guaranteeing jobs and universal health care for all.

“I’ve called it ‘back to the dark ages manifesto,’” Ebell said. “I recently started calling it the green leap backward because it’s so much modeled on the great leap forward that the Chinese Communist Party started in 1958.”

“By the time it ended, I believe somewhere between 18 million and 55 million people died of starvation,” Ebell said.

“The green leap backward is preposterous and everything we can do to ridicule it is justified,” Ebell said. “But just because it’s ridiculous and prosperous doesn’t mean that it’s not dangerous.”

Thomas Pyle, president of the American Energy Alliance, was not alone in concluding that the Green New Deal would hurt the very people it claims to help by drastically increasing energy and other costs for consumers, calling the plan “immoral.”

“It’s an especial assault not just on Americans in general but upon rural Americans,” Ebell said.

Marc Morano, the publisher of ClimateDepot.com, said at the hearing that the Green New Deal is neither “green” nor “new” and repeats the same alleged problems and solutions that the left has promoted for decades.

“‘Global warming’ is merely the latest environmental scare with the same solutions of wealth redistribution and central planning,” Morano said in his testimony. “The ‘Green New Deal’ has very little to do with the environment or climate.”

Morano called the plan “one big bowl of crazy” and warned that conservatives should not respond to it with an alternative but oppose it outright.

Rep. Markwayne Mullin (R-OK) pointed out at the press conference that while many have reacted to the Green New Deal with incredulity, it should be taken seriously.

“It’s about taking over our universities, our office buildings, our apartments,” Mullin said. “How else are they going to guarantee housing for all?”

“How else are they going to pay for education for all?” Mullin said. “We all laugh when they say they’re going to take away air travel in ten years.”

“But how else are they going to control the movement of individuals, like China through high-speed rail,” Mullin said. “We laugh about it, but guys we should wake up and understand this has nothing to do with energy and everything to do with Cortez’s plan to taking America to a socialist style of government.”

“We all say that’s not going to happen,” Mullin said. “This is no joke. This is for real and we need to recognize it.”

But Rep. Rob Bishop (R-UT) added some humor to the press conference, eating a hamburger while speaking with reporters about how the Green New Deal is opposed to cows and meat eaters. 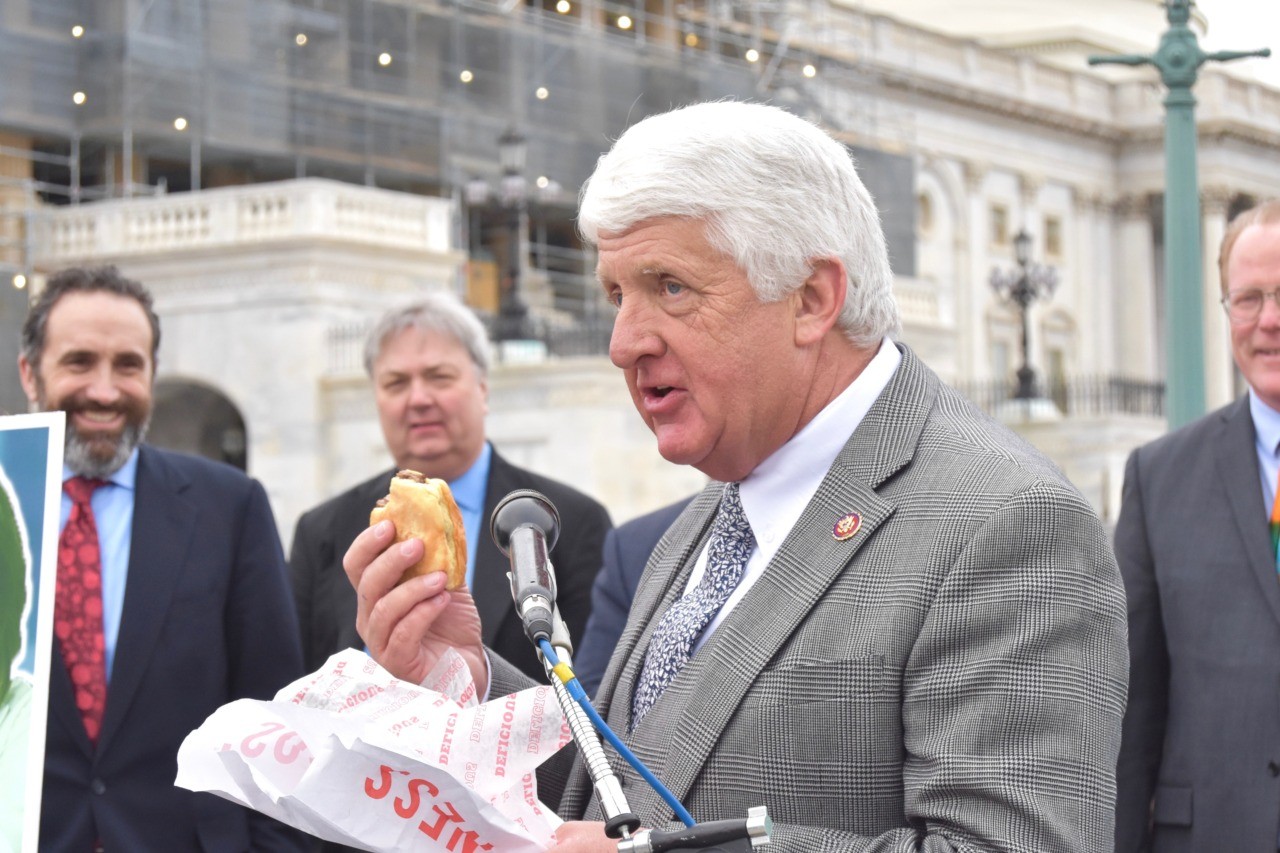 Rep. Rob Bishop (R-UT) enjoyed a hamburger while speaking to reporters at the Capitol on Wednesday. He and other members of the House Western Caucus slammed the resolution, including its opposition to cows because of their alleged contribution to climate change. (Penny Starr/Breitbart News)

Some highlights from the hearing included: 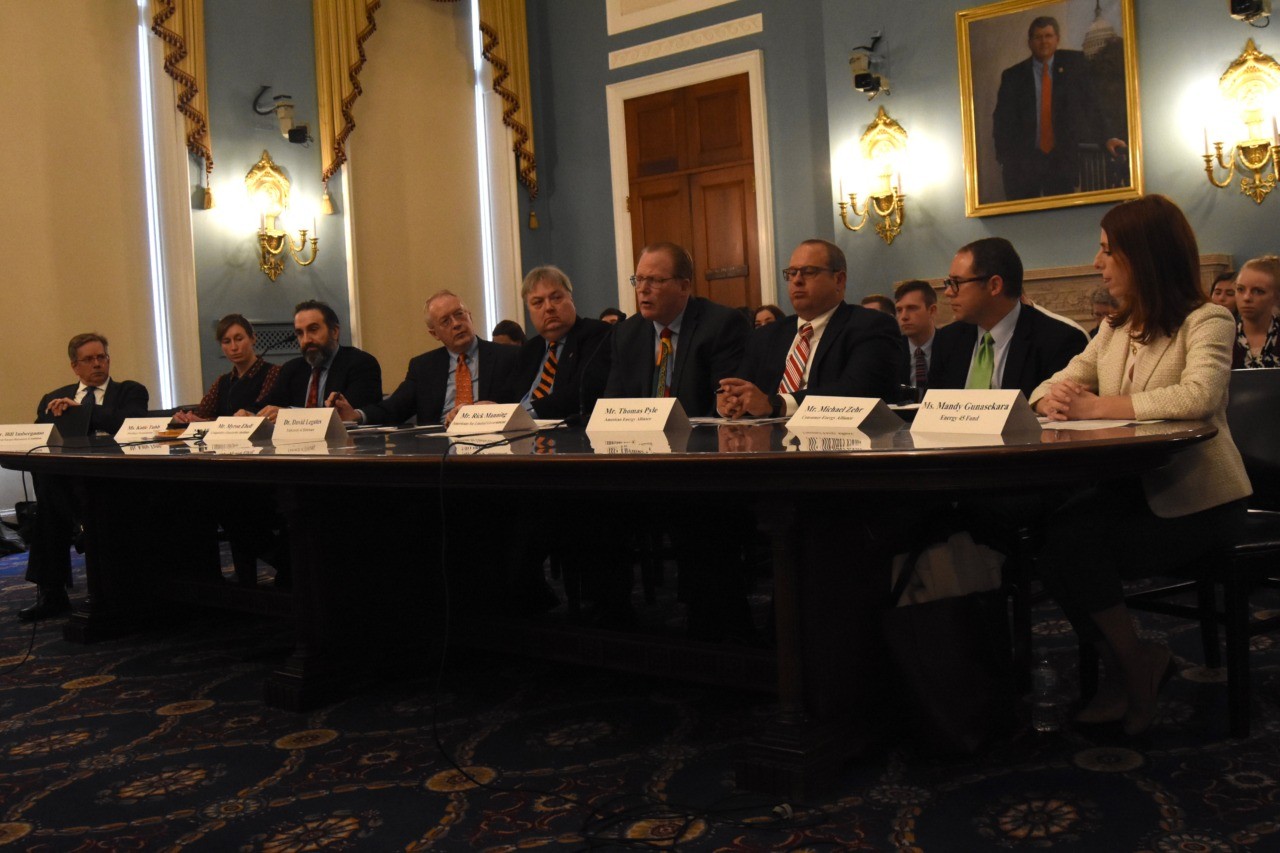 The House Western Caucus held a hearing on Wednesday at the Capitol about the Green New Deal, with climate change and energy experts testifying about its disastrous implications. (Penny Starr/Breitbart News)

But the House Western Caucus has a different view of America and the American Dream:

Members of the Western Caucus have a different vision for America. The support policies the increase, diversity and facilitate the production and delivery of reliable and affordable energy supplies from all domestic sources. This vision doesn’t pick winners and loser and includes a true-all-of-the-above energy strategy.

“The United States is the world’s top energy producer and the American Dream is thriving. January 2019 saw the 100th consecutive month of positive jobs growth in America — the longest period of continuous jobs growth on record.”

The caucus literature noted that from 2005 to 2017 the United States cut emissions by 862 million tons.