Barely has the year begun and already the climate alarmist propaganda machine is up to its old tricks, trying to scare you with made up science stories promising global warming-related doom and gloom…

Experts predict the world could run out of chocolate within 40 years because cacao plants are struggling to survive in warmer climates.

The trees can only grow within approximately 20 degrees north and south of the Equator – and they thrive under specific conditions such as high humidity and abundant rain.

But a temperature rise of just 2.1C over the next 30 years caused by global warming is set to wreak havoc for the plants – and in turn the worldwide chocolate industry, according to the US National Oceanic and Atmospheric Administration.

This nonsense was picked up by several other outlets, including USA Today.

Had they bothered to fact check they would have realized the story was old hat. The original NOAA report was released in 2016 and tweeted out for publicity-grabbing purposes on Valentine’s Day:

Is chocolate your favorite #ValentinesDay treat? See how it's affected by climate: https://t.co/Z8cyA6zWI1 pic.twitter.com/u11eExIfnL

Still, it’s good to be reminded of how politicized NOAA had become under the Obama administration – and of how much work needs to be done to purge it of all those left-wing activists masquerading as scientists.

Meanwhile, here in the real world is what – h/t Paul Homewood – is actually happening to global cocoa bean production: 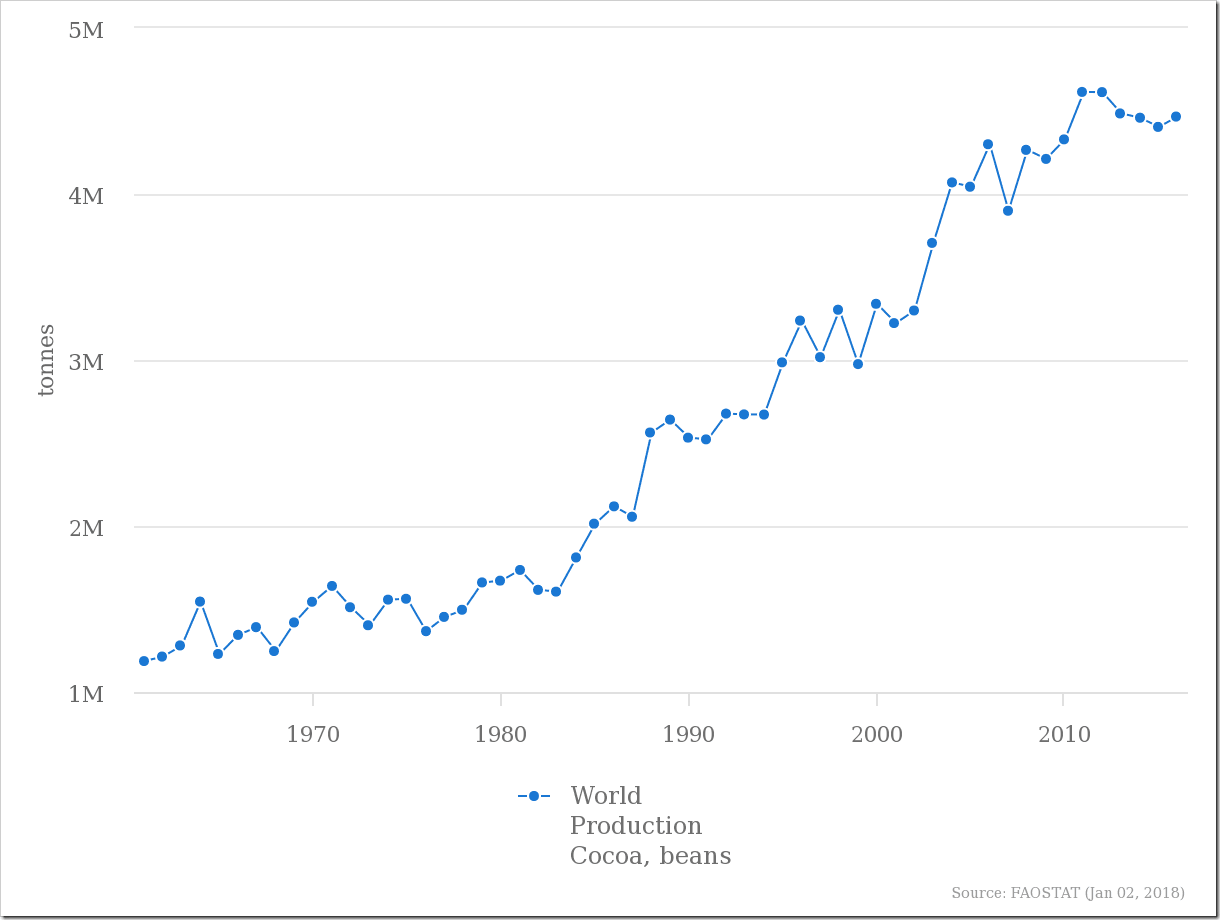 Next, the great drought scare – again courtesy of the Mailonline which has stumbled on a paper published last year in the alarmist journal Nature Climate Change. The story is headlined: A quarter of the world could become a DESERT if global warming increases by just 2ºC.

An increase of just 2°C (3.6°F) in global temperatures could make the world considerably drier and more desert-like, new research has warned.

More than a quarter of the world’s land surface, home to more than 1.5 billion people, would become more arid and droughts and wildfires could be widespread.

Perhaps the story was pushed by the notorious University of East Anglia (UEA – aka University of Easy Access – center of the Climategate scandal), one of whose researchers co-authored the study.

In fact, though, there are plenty of other studies which contradict this desertification thesis. And let’s never forget that rising CO2 levels are currently causing the planet to grow more green, not more arid.

What’s odd is that the online offshoot of the Mail – which generally takes a skeptical line on enviro-lunacy – should be running this green propaganda uncritically.

As Homewood trenchantly puts it: Who writes the Mail‘s Green Crap?

Admittedly the Mailonline is a different kettle of fish from the ideologically conservative print edition of the Mail. It could be that its priorities are simply to provide as much clickbait as possible to as broad an audience as possible – and integrity or consistency be damned.

Or, I suppose, it’s possible that Mailonline simply gets bombarded with news feature ideas from persistent freelance hacks, and just doesn’t have the nous to turn them down.

My worry, though, is that this is that another example of probably the single biggest threat in the world right now: SJW convergence.

By this – and I’m going to be writing about it an awful lot in the coming year – I mean the tendency of every institution, even ones which are supposed to be conservative, to have its values suborned by those of the regressive left.

As someone who has given over the last 15 years of his career to fighting this cause – not because it makes me rich, still less because it makes me popular, but because it matters – I cannot tell you how totally it stinks that one of the few (and best) conservative news outlets in the mainstream media should start endorsing this kind of green crap.

And the Telegraph – formerly the house journal of the Tory shires – is similarly guilty. I doubt that more than a small fraction of its conservative readership subscribes to the green nonsense. Yet barely a day goes by without the Telegraph running another puff piece for renewables – a corrupt, rent-seeking, crony-capitalist industry which couldn’t be further from the interests of most of the Telegraph‘s honest, hard-working, old-fashioned readership.

Homewood is as incensed by this as I am and has courted the Telegraph’s wrath by listing one or two of the more egregious examples of its shameless promotion of the climate industrial complex.

If conservative newspapers go on throwing away their ideological integrity like this – either for the purposes of clickbait or because they’ve been suborned by leftists who don’t understand the brand – then all they will succeed in doing is to accelerate the collapse of the public’s interest in anything the mainstream media has to say.

As I wrote a few years back in my book Watermelons, probably the greatest failure by my media colleagues in the last half century has been their abject inability to get on top of the biggest scientific and financial scandal in history: the great global warming scare. It offers so many scoops. There’s so much low-hanging fruit. Yet every day the Fourth Estate – supposedly the institution that keeps us safe by holding truth to power – fails in its basic duty by allowing its environmental coverage to be dictated by left-leaning organizations like World Wildlife Fund and Greenpeace.

Last year, for example, pretty much the entirety of the UK media ran with a story which quite literally came from a Greenpeace press release. It claimed that the cost of onshore windpower had halved in two years and that it had now replaced coal as our cheapest form of electricity.

Here – courtesy of a report by the GWPF – is how Britain’s fearless and frank media covered this story:

• The Times, ‘Winds of Change: The price of renewable energy is falling faster than anyone dared hope’

But the story, backed by a big poster advertising campaign on the London Underground starring Peter Capaldi (Doctor Who), was a lie – green propaganda, nothing more, with absolutely no factual credibility. This was recently confirmed in a ruling by Britain’s Advertising Standards Authority which has sought – (though with how much success remains to be seen) – to ban Greenpeace from making these spurious claims again.

Problem is, as all cynical propagandists know, “a lie is halfway round the world before the truth has got its boots on.”

The chocolate non-story, the desertification non-story, the “wind power now cheap” non-story – these will all linger in the public imagination far longer than the buried retractions (which will far fewer people will have read).

And I suppose I shouldn’t complain: the more piss-poor the mainstream media’s coverage of the great climate change scam becomes, the more readers we’re going to have coming to Breitbart desperate for the truth of what’s really happening.

But as one who knows that the environment is one of the most important battlegrounds of the Culture Wars on which the survival of Western Civilization ultimately depends, I find this failure of our mainstream media to do its most basic job very depressing indeed.