A group of Sikhs in Virginia has created a new political organization to emphasize their support for the U.S. Constitution, partly because the media has often portrayed Sikhs as sidekicks for separatist Islamic groups in the United States.

The group, titled Sikhs for Liberty, held its first meeting in Virginia, where founder Dr. Jatinder Singh Mann described the organization’s goals: “The name of our organization is ‘Sikhs for Liberty’… it does not say ‘Liberty for Sikhs’ [because] we are Sikhs for liberty, and we want the world to know that Sikh[‘s religion] …. supports liberty for the whole of mankind.”

The group is dedicated to “making America more aware about the Sikhs, and equally importantly, dedicated to making Sikhs more aware of what America is all about,” he told his audience of Sikhs gathered in Chantilly, Va., on April 30.

Sikhs emerged and survived amid endemic war in India before the British conquest, and they need to learn the wisdom of America’s constitutional founders, including Benjamin Franklin, John Adams, and Thomas Jefferson, said Singh. Unrestricted “democracy is two wolves and a sheep voting on what to eat for dinner  … [but in a] constitutional republic, the sheep has an AK-47,” Singh said.

We need to lean how to contribute to America. We came here for a better life. We get it. We are not thankless people. But we do not know how to give back. We want to and hopefully this organization will be a guidepost to help us achieve that.

The group’s pro-America perspective is markedly different from several other Sikh groups which are entangled in the Democratic Party’s politics of enforced acceptance of diversity and of “identity” blocs, such as post-graduate, Islamic, left-wing, sexual and transgender advocacy groups. 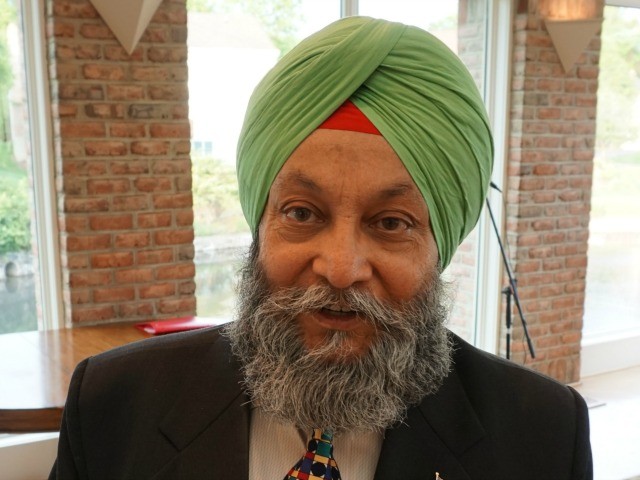 One unspoken goal for the new Sikh group is to show the public that Sikhs are not separatist Islamists, but instead favor integration into Americans’ society, and favor coexistence with other religious and political groups.

The Sikh religious community is based in Northern India, on the Indian side of the border with Muslim-dominated Pakistan. They lost control of their homeland territory when the British Empire captured the last corner of the Indian subcontinent in 1849. One hundred years later, nearly all Sikhs in the area were forced to flee Muslim mobs during the very bloody partition of the British empire into Pakistan and India.

Sikhs are proud of their history of military prowess, which allowed them to survive a 150-year on-and-off war with the Muslim emperors of India, which only ended in the late 1700s.

The Sikhs’  “Game of Thrones” history has deeply shaped their culture, and also helped Sikhs to prosper as soldiers, professionals and business executives who are culturally prepared to peacefully integrate into larger communities, including the United Kingdom and the United States.

Sikhs are named for their monotheistic religion of Sikhism, which is based on the teachings of leaders dating from roughly 1500 to almost 1700. Sikhs don’t worship a named deity and do not have an organization of clerics, but instead see a divinely connected value in truth, contentment, compassion, humility and love, which they describe as the  “Five Virtues.” Sikhs believe in reincarnation and do not seek to convert other believers.

Unlike Islam, Sikhism does not view women as subordinate and Sikh women do not wear Islamic-style face-veils. Sikhism is not hostile to other religions and it opposes the Indian-style caste system, ensuring that all Sikh men carry the Singh name and all Sikh women carry the name “Kaur.” Singh means “Lion,” and Kaur means “Princess.”

But aggressive Islam has followed Sikh migrants to the West, causing many Europeans and Americans to treat Sikhs as if they are part of the self-segregating Islamic communities in Northern England or in many U.S. cities. Also, Islamic groups use Sikhs as proxies to advance their separatist agenda. That widespread confusion has prompted hostile reactions in daily life, and some attacks on Sikhs, notably a 2012 attack by a racist who killed six Sikh people at a Sikh temple in Oak Creek, Wisconsin.

Sikhs are visibly different from Americans and Muslims. The men usually wear a turban to contain their uncut hair, and they carry an iron bracelet and usually carry a symbolic “kirpan” dagger as a symbol of their military struggle to defeat oppression. But almost half of Americans told a survey in 2013 that they believe Sikhism is a variant of Islam.

“All of us are aware of the problem that we and especially our children face because of our unique outward appearance … [but] this is the best place on Earth to practice our religion, unmolested by government or people,” Dr. Singh said.

Sikhs began migrating to the United States in the 1890s and first prospered in California despite a period of official discrimination. The estimated number of Sikhs in the United States is uncertain, but it ranges from 78,000 in a 2008 estimate, to a minimum of 200,000 in a 2012 estimate, up to 700,000 according to Sikh political activists.

Democrats are eager to recruit Sikhs into their centralized coalition of diversity. In 2013, for example, President Barack Obama offered a short video greeting to Sikhs during their annual religious events, in which he flattered Sikhs as a model for the United States’ turbulent mix of autonomy and idealism.

I want to extend my best wishes to all our Sikh friends, across the United States and around the world, who this weekend are observing the anniversary of the birth of Guru Nanak Dev Ji, the first Sikh Guru. This sacred time is an occasion to reflect on Guru Nanak`s timeless teachings and the principles that are at the heart of Sikhism, including the equality of all human beings, the pluralism we cherish in diverse societies and the compassion we owe one another. Here in the United States, we`re grateful to the many Sikh Americans who give life to these values and enrich our country every day, reminding us that these shared principles are not only at the heart of the Sikh faith, they are central to who we are as Americans.

Most Sikh political groups — many of which are very small — have aligned themselves with the Democratic Party’s “centralized coalition of the diverse” against the mainstream preferences of pro-integration Americans.

The Sikh Council on Religion and Education backed Obama’s election and celebrated his win in 2012. One of SCORE’s subsidiaries is the National Sikh Campaign, which is headed by Gurwin Singh Ahuja, a former staffer in Obama’s White House.

The Trump Effect names the ways in which his anti-Muslim rhetoric is directly tied to a spike in anti-Muslim hate crimes. Scholars have even shown that the Trump Effect ismaking our children more angry and less happy. A report by the Southern Poverty Law Center found that “the campaign is producing an alarming level of fear among children of color and inflaming racial and ethnic tensions in the classroom.

The anti-Trump rhetoric is emulated by the Sikh American Legal Defense and Education Fund, which declared that “divisive political rhetoric [is] coming from our current administration.” The fund is partly backed by the left-wing W. K. Kellogg Foundation.

The non-partisan group, Sikhs PAC, has donated twice as much to Democratic politicians as the GOP politicians. The group’s leader, Gurinder Singh Khalsa, loudly protested when he was misidentified by GOP campaign aides in 2016 as a Muslim:

I am not Muslim and I am not supporting Trump. He is putting my picture, saying Muslims support him and I have nothing to do with it. I don’t support Trump … It was shocking, disturbing and this will create more confusion among people because they are sending it nationwide.

Each November during his presidency, President George W. Bush reached out to the existing Sikh leadership.