The probability of American children earning as much as their parents has plunged from 92 percent down to 50 percent during the last seven decades, according to a new study of tax data and the shrinking American Dream of upward mobility.

Compared to people born in 1940, the “babies born in 1980 — today’s 36-year-olds — the index of the American dream has fallen to 50 percent: Only half of them make as much money as their parents did,” says a report in the New York Times.

“In the industrial Midwestern states that effectively elected Donald Trump, the share was once higher than the national average. Now, it is a few percentage points lower. There, going backward is the norm,” the newspaper admitted.

The study of IRS data report is here. 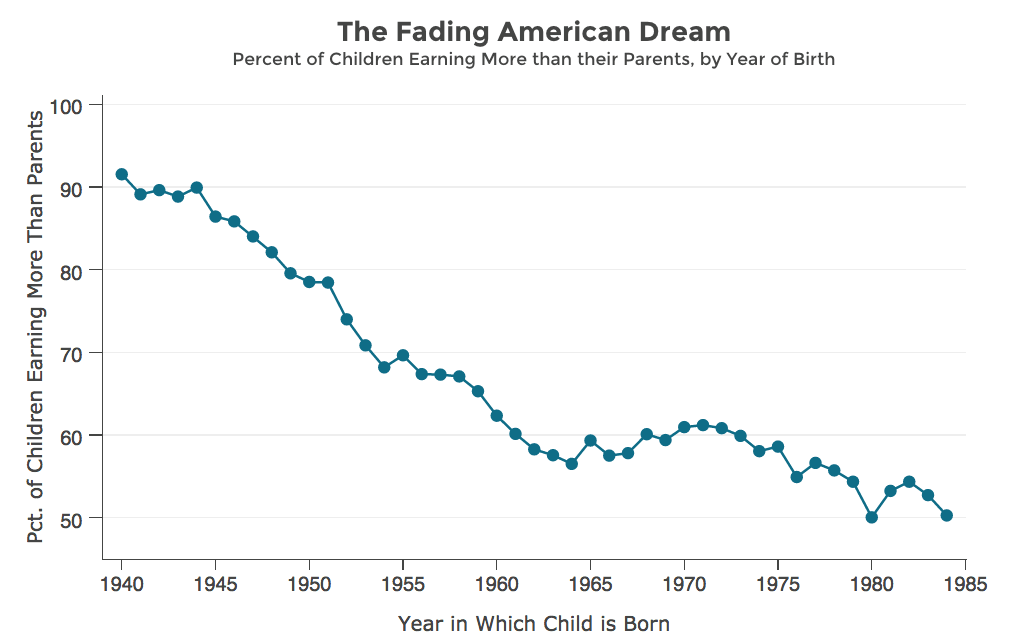 The researchers suggested the generation-to-generation loss of income is caused by a rise in economic inequality.

Most of the decline is due to the more unequal distribution of economic growth in recent decades rather than the slowdown in GDP growth. Increasing economic growth rates to the higher levels experienced in mid-century America would increase the fraction of children earning more than their parents to 62%. Spreading the existing growth more broadly across the income distribution would raise the level to 80%

But that claim assumes that the inequality is a cause, not just another consequence, of the economic factors that are reducing economic growth.

The NYT report also tried to focus the blame on rising economic inequality and offered to a list of feel-good progressive fixes that were not implemented, or did not produce beneficial impacts, during President Barack Obama’s two progressive terms.

Given today’s high-tech, globalized economy, the single best step would be to help more middle- and low-income children acquire the skills that lead to good-paying jobs. Notably, most college graduates still earn more than their parents did, other data show — yes, even after taking into account student debt.

But education is not the only answer. Incomes have also stagnated because of the rise of corporate power and the weakening of labor unions, leading profits to rise at the expense of wages. The decline of two-parent families plays a role, too. And tax policy has not done enough to push back against these forces: The middle class, not the affluent, deserves a tax cut.

Neither the researchers nor the NYT’s writer suggested that the federal government’s policy since the 1980s of hugely inflating the labor supply amid labor-reducing automation might be contributing to rising inequality and declining salaries.

That wage-cutting competition shifts roughly $500 billion per year from wages and salaries into company profits, boosting investors and Wall Street, but reducing productivity growth and creating a huge population of unemployed men and of government-dependent poor people in the United States.

In March 2016, Donald Trump promised to protect Americans from the guest worker programs, such as the H-1B program, which outsources at least 650,000 white-collar jobs to foreign guest workers living in the United States: “I will end forever the use of the H-1B as a cheap labor program, and institute an absolute requirement to hire American workers first for every visa and immigration program,” he said “No exceptions.”

In August 2016, Trump laid out his pro-American immigration policy in an Arizona speech:

The truth is, our immigration system is worse than anyone realizes. But the facts aren’t known because the media won’t report on them, the politicians won’t talk about them, and the special interests spend a lot of money trying to cover them up.

Today you will get the truth.

The fundamental problem with the immigration system in our country is that it serves the needs of wealthy donors, political activists and powerful politicians. Let me tell you who it doesn’t serve: it doesn’t serve you, the American people.

Immigration reform should mean something else entirely: it should mean improvements to our laws and policies to make life better for American citizens.