Hillary Clinton was grilled by the feds for hours concerning her emails and her husband Bill had a private meeting with the Attorney General supposedly overseeing the investigation — but the establishment media is feverishly focused on a single Trump tweet showing a six-point star.

The tweet posted by the presumptive Republican nominee contained a poster in which Hillary took center place with the words “history made”. Then in a six-point star – much like a sale advert – the words “most corrupt candidate ever” were written. Simple enough. 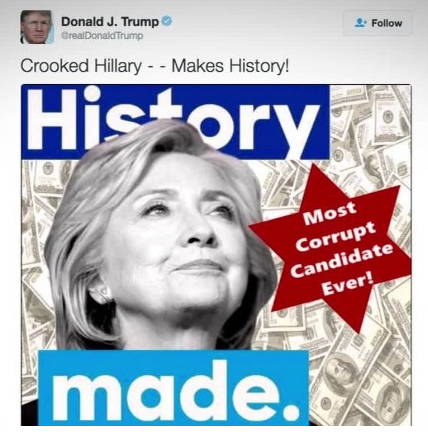 Trump detractors in both the Democratic and Republican parties see something much more nefarious. This wasn’t just a tweet pointing out the obvious – that the Clintons and corruption are bosom buddies – it was an appeal to Trump supporters, i.e., white supremacists.

Erick Erickson – a #NeverTrump Republican who was spanked so bad by Trump he still cannot sit down – also chimed in. Erickson tweeted, “A Star of David, a pile of cash, and suggestions of corruption. Donald Trump again plays to the white supremacists.”

Trump took down the tweet and then tweeted out the same image — with the six-pointed start replaced by a red circle, plus some extra imagery showing polling data about Clinton.

The six-point star is commonly associated with Judaism. It is also used by Christians, Muslims, the Freemasons, and even the occult. But this is irrelevant to Trump’s critics, as is the fact that Trump’s son-in-law, Jared Kushner, is of the Jewish faith and his daughter Ivanka is now an observant Jew.

So the criticism of Trump was not directed at him personally, nor was it really suggesting that the top Republican was anti-Semitic. The criticism was directed at the boorish, angry white Americans who, according to the media narrative, have flocked to Trump because of his “veiled” messages of bigotry.

The real target of the media and GOP establishment is the Trump supporter. Why? Because this is the free-thinking person who had the gall to rebuke the RNC elite and ignore the media narrative. The fact that Trump obtained the most Republican votes in primary history despite the constant charges he peddles racism and bigotry must mean, in the eyes of Trump’s foes, his supporters are racists and bigots.

Make no mistake; this is at the heart of this latest “Star of David” controversy and all the other controversies. Yes, Trump deleted the six-pointed star tweet and replaced it with a circle, but that was merely to try and nip a non-existent controversy in the bud.

No amount of deletion is able to delete how Democrats and the media feel about working-class white Americans who have become strangers in their own country. When Barack Obama was raising money to defeat Hillary in 2008 he told a bunch of Democrat donors that he knew why working-class whites were upset with an economy that abandoned them.

“It’s not surprising then that they get bitter, they cling to guns or religion or antipathy to people who aren’t like them or anti-immigrant sentiment or anti-trade sentiment as a way to explain their frustrations,” Obama explained. Translation – rather than embrace the New World Order, whites were embracing God and guns. Obama, though, made no mention of those pesky homicidal Muslims.

Obama continued casting whites as bigots in 2010. Worried about Republican midterm gains, Obama told Univision that Latinos had to get involved in politics to punish those white Republicans advocating for border security.

“If Latinos sit out the election instead of saying, ‘We’re going to punish our enemies and we’re gonna reward our friends who stand with us on issues that are important to us,’ if they don’t see that kind of upsurge in voting in this election, then I think it’s going to be harder and that’s why I think it’s so important that people focus on voting on November 2,” Obama said.

If the left’s usual definition of a racist was applied equally, Obama would be one. But just as the Irish need not apply for employment in the 1800s, whites need not apply for an equal footing in a politically correct world in which they are seated at the back of the bus.

Trade, immigration, and unnecessary wars have gutted manufacturing, created a tidal wave of cheap labor, and bankrupted the nation. Working class whites are not mad at minorities; they are mad at the ruling political class that sold them out.

And the fact that banks like Goldman Sachs funnel cash to Clinton is not an indictment against Jews in banking; it is an indictment of a political class that puts commerce before country.

But if the media actually reports these issues and addresses the consequences of a globalism that has failed, it will have to admit it aided and abetted in the fleecing of America. It is much easier to call Trump’s supporters racists because, if Trump loses in November, they can brand his whole movement as being tainted by racism.

If the issues Trump’s champions are all based in bigotry, the establishment has the moral authority to exile such issues to Elba when future elections roll around. That is the end game and that is why this election could be America’s last chance to put herself first.

Independence Day has a whole new meaning in 2016.

Joseph R. Murray II, is administrator for LGBTrump, former campaign official for Pat Buchanan, and author of “Odd Man Out”. He can be reached at jrm@joemurrayenterprises.com.