The number of babies born in the U.S. and named Muhammad or some variant has been on the rise for the past several decades, according to a Center for Immigration Studies analysis of Social Security Administration name data.

The CIS analysis, conducted by David North, reveals that since the 1960s the number of babies named Muhammad or any of 12 other spellings has increased dramatically: from 29 in 1964 to 2,931 in 2014. 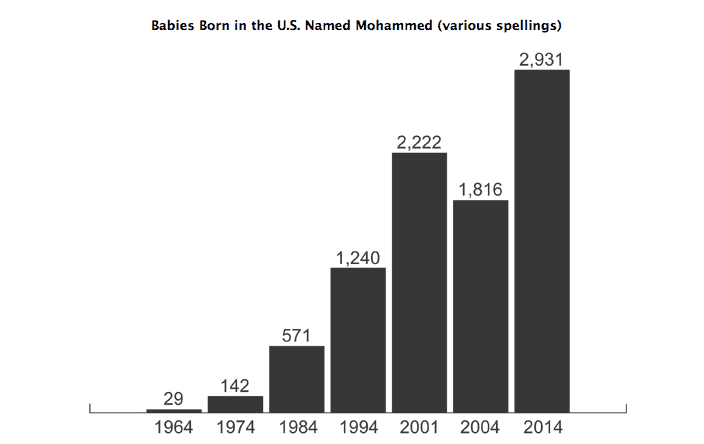 North surmises that the decline after 2001 was likely a reaction to the September 11, 2001 terrorist attacks.

According to North, the names provide an “indirect measure” of the growth of the second-generation Muslim population.

“A boy named Mohammed (or with one of a dozen other spellings) born here is likely to grow up in a Muslim environment and, at the same time, be a U.S. citizen,” he explained. “So we can get a rough proxy of the growth of the population of second-generation Muslim immigrants by noting how many of them carry these names. (Third-generation babies are also included.)”