Iraq held its parliamentary elections on Sunday, several months ahead of schedule. Turnout was disappointingly low, and despite heavy billing as an opportunity for the disgruntled Iraqi public to make big changes, there were no seismic shifts in power.

The most interesting result of the election was that firebrand nationalist Shiite cleric Moqtada al-Sadr’s party picked up the most seats in Parliament, while rival Iran-backed Shiite militia factions were the biggest losers. Pro-Iranian candidates took such a beating that one of their most prominent lawmakers, Hadi al-Amiri, denounced the entire election as rigged on social media.

“We will not accept these fabricated results, whatever the cost,” Amiri declared on Tuesday. 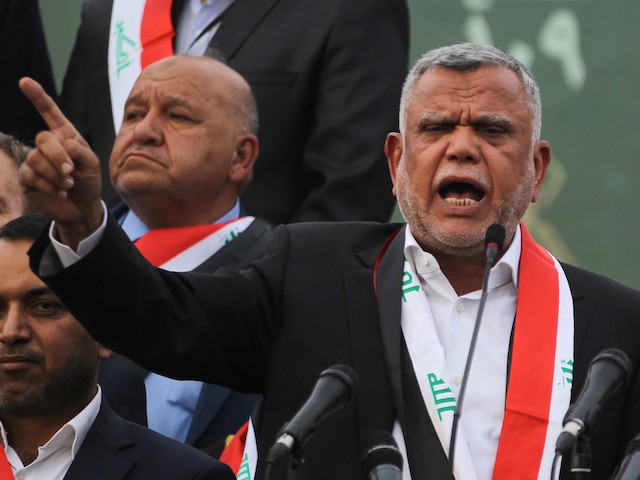 Hadi al-Amiri, head of the Iranian-backed Badr Organization and leader of the Fateh Alliance, a coalition of Iranian-supported militia groups, speaks during a campaign rally in Baghdad on May 7, 2018, ahead of Iraq’s parliamentary elections to be held on May 12. (Ahmad Al-Rubaye/AFP/Getty Images)

Sadr’s party announced it was up to 73 seats after the voters were counted. Former Prime Minister Nouri al-Maliki was the second biggest winner.

“We’ll use legal frameworks for now. If unsuccessful we’ll have to go to the streets and do the same thing that was done to us during protests – burn party buildings,” a pro-Iran militia commander said ominously.

The election was held early as a concession to public anger, but the Associated Press noted it was boycotted by “many of the young activists who thronged the streets in late 2019.”

Much of the Iraqi electorate evidently remains enraged by the iron-fisted crackdown on demonstrators and disillusioned about reforming their government at the ballot box. The pro-Iranian parties that fared so poorly on Sunday are linked to militias accused of killing hundreds of demonstrators. 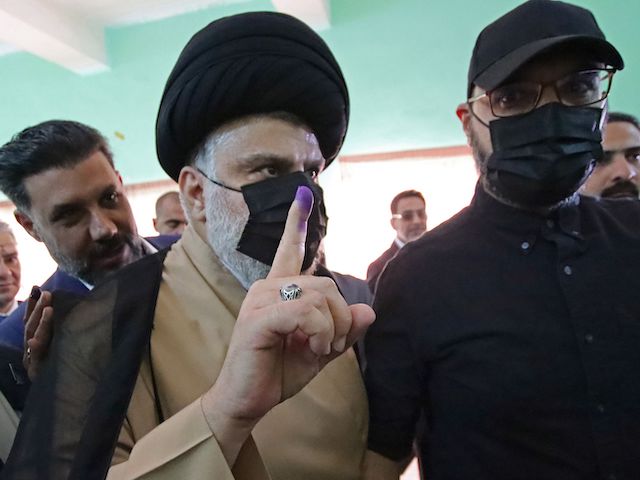 Iraq’s populist cleric Moqtada Sadr shows indelible ink on his finger after voting in the central Iraqi shrine city of Najaf on October 10, 2021, in an early parliamentary election billed as a concession to anti-government protests but expected to be boycotted by many voters who distrust official promises of reform. (Ali Najafi/AFP/Getty Images)

“I did not vote. It’s not worth it. There is nothing that would benefit me or others,” a 20-year-old Iraqi complained to Reuters.

“The most important thing in this election is that foreign countries like Iran didn’t interfere in the vote. We’ve been celebrating since last night,” a more upbeat, but equally unemployed, young voter in Sadr’s quarter of Baghdad said.

Turnout on Sunday was down to 41 percent, the lowest since dictator Saddam Hussein was overthrown by the U.S. invasion. Iraqi analyst Ali Anbori told Al Jazeera News the Sadrist Movement’s organizational muscle was the key to winning big in the low-turnout contest. 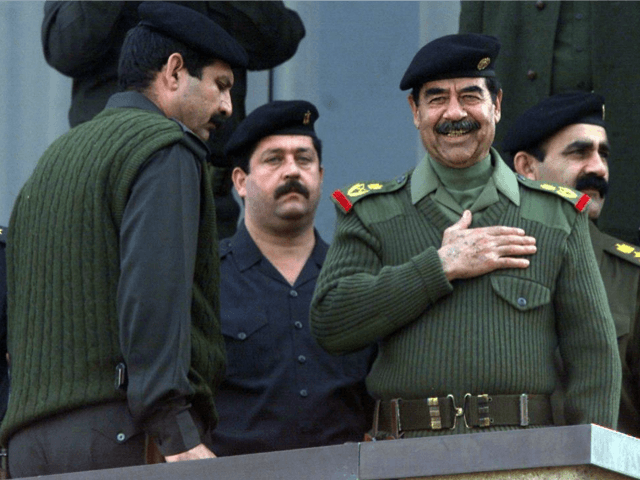 “Moqtada has been working a great deal to win a lead in the election. They have a good election machine, and they use all kinds of means to achieve their goals,” Anbori said.

“Also, Muqtada isn’t so far away from Iran himself. Eventually, all groups will sit together and form a government under the umbrella of the Iranian regime,” he added.

Iraqis seem resigned to living under theocratic parties with “good election machines” and strong ties to Tehran, although some apparently appreciate Sadr’s appeals to Iraqi nationalism. When the election result was announced, Sadr promised a government free of “foreign influence” and said only foreign powers that “do not interfere in Iraq’s internal affairs” would be welcome.

“With 94 percent of the ballot boxes counted, none of the competing political blocs appeared on track to win a majority in parliament and consequently name a prime minister,” the Times of Israel (TOI) reported. “But as the results stand, al-Sadr’s bloc will be able to take a leading role in the political horse-trading to find a compromise candidate and set the political agenda for the next four years.”

TOI speculated that since neither the Sadrists nor any other faction will have enough seats in parliament to install its own prime minister, current officeholder Mustafa al-Kadhimi could keep the job. 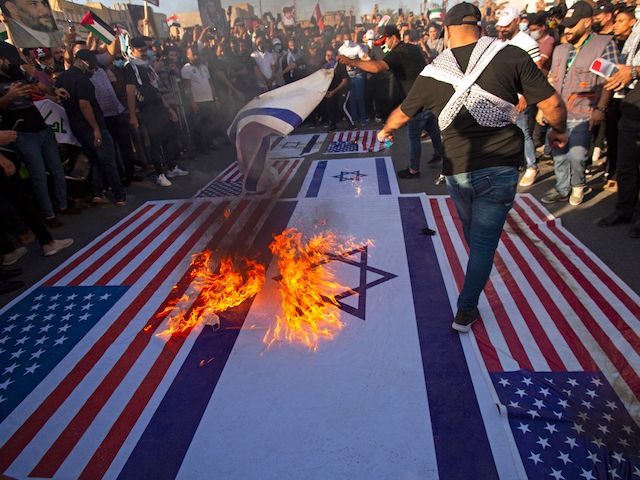 Supporters of Iraqi Shiite cleric Muqtada al-Sadr burn the American and Israeli flags during a march in solidarity with the Palestinians, in the southern Iraqi city of Basra on May 15, 2021. (Hussein Faleh/AFP via Getty Images)

Reuters noted the bloc of Sunni Muslim parties did quite well in the election, growing as strong as they have been since the fall of Saddam, but “there are still signs that Tehran’s grip on the country remains formidable.”

Among those signs are the strong performance by Maliki, who is favorably inclined toward Iran, and the presence of Iranian military leader Esmail Ghaani in Baghdad when the election results were announced. Ghaani heads the Quds Force, the foreign-influence division of Iran’s terrorist Islamic Revolutionary Guard Corps (IRGC).

“According to our information, Ghaani was attending a meeting with (Shi’ite militia parties) yesterday. They will do whatever they can to try to organize the biggest bloc – although that will also be very difficult with Sadr’s power,” an unnamed Western diplomat told Reuters.

Other sources told Reuters that Maliki’s unexpectedly strong showing could be a sign that Iran loyalists in Iraq are shifting their support to him instead of the Shiite militia leaders, whose violence against Iraqi protesters made them unpopular while strengthening Sadr.