A draft report from the Extractive Industries Transparency Initiative (EITI), a Norway-based international watchdog for the oil, gas, and mineral industries, called China’s 2008 infrastructure deal with the Democratic Republic of Congo (DRC) “unconscionable” and advised the current DRC government to take steps to mitigate the damage.

The as-yet unpublished report, seen by Reuters on Friday, concerns a deal made by former DRC President Joseph Kabila in 2008. The agreement essentially involved swapping Congo’s mineral profits for Chinese-built infrastructure projects, including roads and hospitals.

The DRC’s cobalt and copper mines are run by a huge Chinese-Congolese joint venture called Sicomines, while the infrastructure was supposed to be constructed by Chinese state-owned enterprises called SinoHydro Corp. and China Railway Group Ltd. 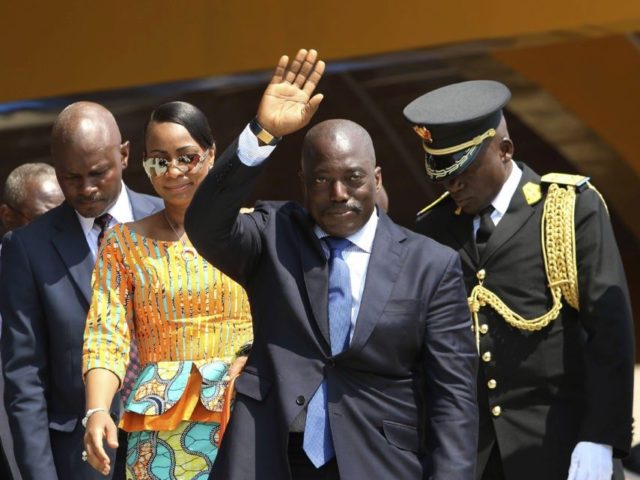 In this June 30, 2016 file photo, Congolese President Joseph Kabila, center, waves as he and others celebrate the Democratic Republic of Congo, DRC, independence in Kindu, Congo. (AP Photo/John Bompengo, File)

Under the 2008 contract, all of Sicomines’ profits would initially go to reimbursing investments in Congo’s most urgent infrastructure projects. It was on that basis that parliament agreed to exempt Sicomines from all taxes, the draft says.

Under the 2017 amendment, seen by Reuters, only 65% of Sicomines’ profits must initially go toward reimbursing the investments while 35% goes to shareholders.

The change could further slow the pace of the infrastructure projects, the draft says. To date, less than $1 billion of the expected $3 billion has been invested, about $1 billion less than projected at this stage, it says.

“This amendment constitutes a violation of the security of the interests of the Republic,” the draft says.

The report also blasted China for taking an absurd 68% stake in Sicomines, leaving the Congolese with only 32% even though they contributed all of the mining assets plus 32% of the start-up capital.

The EITI report advised the current DRC government, headed by President Felix Tshisekedi, to cancel the 2017 amendment and renegotiate the original deal, as well as taking a close look at Sicomines’ finances and canceling some of the DRC’s other contracts with Chinese firms.

Tshisekedi has been notably less enthusiastic about Chinese projects than his predecessor Kabila was. At the very least, Tshisekedi seems reluctant to sign new deals and inclined to re-evaluate the old ones.

Bloomberg News reported last week that the DRC has established a commission to review the minerals-for-infrastructure deal and investigate its “major legal, technical, and financial problems.” DRC officials said the high interest rates on the loans taken from China were among the problems.

FOLLOW THE MONEY: Chinese state media admits China's blossoming ties with the Taliban are aimed at getting control of Afghanistan's mineral wealth. https://t.co/PVM51xUgpY

“More than a decade later, less than a third of the infrastructure funding has been disbursed, and the mining project, known as Sicomines, has only received about three-quarters of the promised investment,” Bloomberg noted.

Sicomines angrily dismissed the draft report on Friday, calling the researchers “not objective” and “ignorant.”

A Sicomines official told Reuters before the draft report leaked that the China-DRC development has “driven development for Congo’s people.” The official promised to disburse more funding for infrastructure projects in the future, as mining production increases.

The Business Standard reported in September that African nations are having second thoughts about many Chinese projects, as new African administrations question the unfair terms agreed to by their predecessors, question the legality of some agreements, chafe under the enormous loans taken out from Chinese banks to finance Chinese-built projects, and denounce the “shoddy” work performed by Chinese contractors.