Protests broke out in Beirut last week when Bitar announced his investigation would be suspended while the Court of Appeals considered requests to remove him by two former ministers accused of negligence. Sources within the Lebanese government told foreign media that Bitar had also been threatened by Hezbollah, the terrorist organization that is also one of Lebanon’s most powerful political parties. 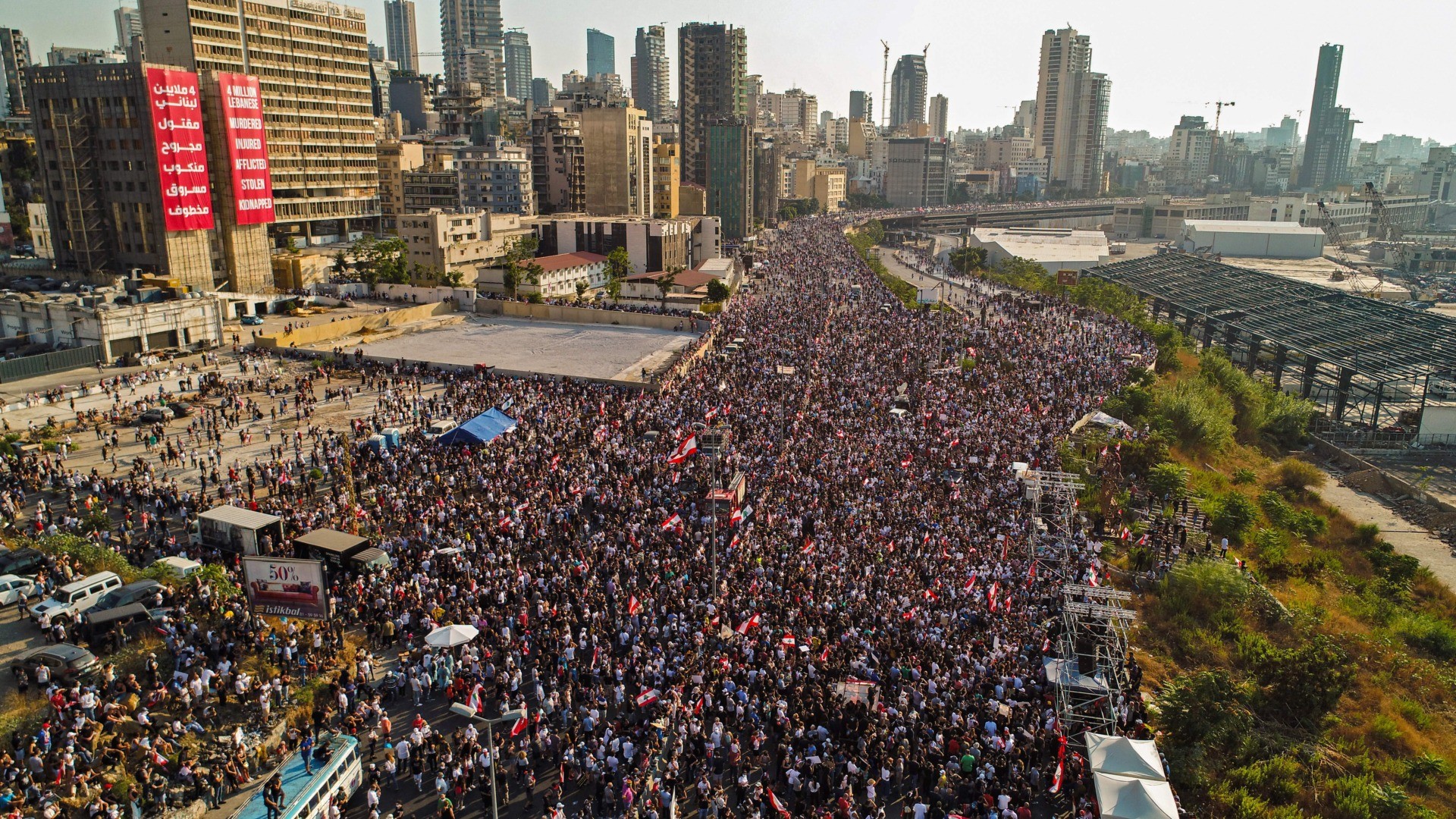 This picture taken on August 4, 2021 shows an aerial view of demonstrators gathered outside the port of Lebanon’s capital Beirut on the first anniversary of the blast that ravaged the port and the city. (KAMEEL RAYES/AFP via Getty Images).

Family members of the hundreds killed in the blast feared the already slow-moving investigation would be permanently shut down if Bitar was removed, and Prime Minister Najib Mikati shared their concerns. 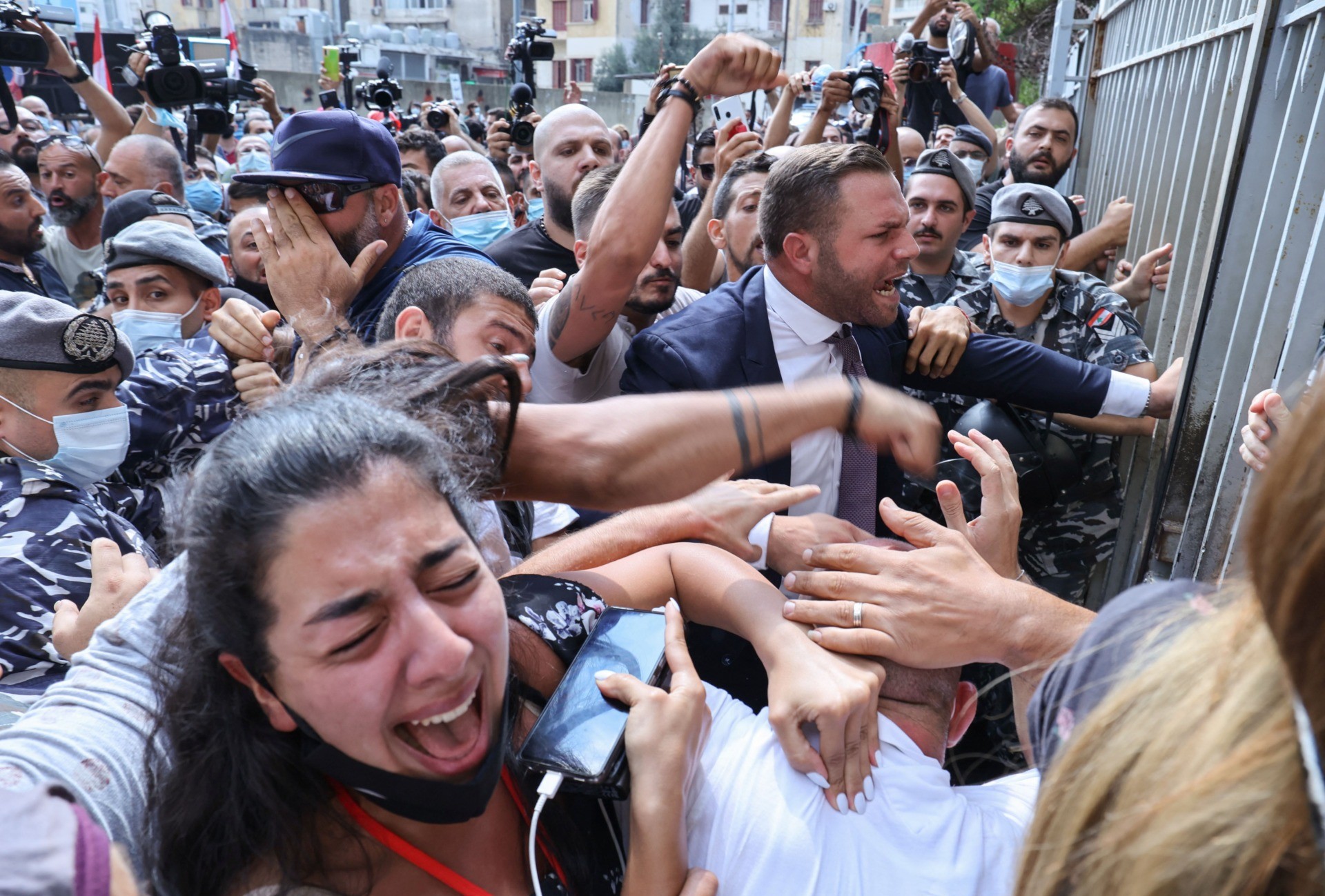 Activists and relatives of victims of the Beirut port explosion scuffle among themselves as Lebanese security members try to interfere during a demonstration on September 29, 2021 outside the capital’s Justice Palace, to protest the suspension of the investigation into the August 4, 2020 port explosion. (ANWAR AMRO/AFP via Getty Images).

On Monday, the Court of Appeals rejected the lawsuits against Bitar filed by three former government ministers — all of them currently sitting members of the Lebanese parliament — and authorized the judge to “resume investigations this very moment.”

According to the Associated Press (AP), the Court of Appeals said the request to remove Bitar was “not in its jurisdiction,” and slapped the three complaining officials with a fine of 800,000 Lebanese pounds, which works out to about $530 at current official exchange rates.

“Bitar is expected to summon the three lawmakers before parliament goes back into session on October 19, after which they will benefit from political immunity,” France24 noted, quoting a Lebanese court official.

According to Lebanon’s Daily Star, Bitar did indeed issue a summons to the three lawmakers plus former prime minister Hassan Diab.

Diab has ignored previous summons to testify before Bitar’s investigation, prompting the judge to issue a warrant for his arrest in September. The Lebanese parliament rebuffed Bitar by claiming he has no authority to subpoena Diab.

Various wings of the Lebanese government have blocked Bitar’s efforts to procure testimony from virtually everyone who could be held accountable for the Beirut blast, including Lebanese intelligence chief Abbas Ibrahim and President Michel Aoun.

Bitar’s investigation remains an uphill slog against Lebanon’s corrupt and heavily factionalized political system, which has opposed him every step of the way, and managed to knock his predecessor Judge Fadi Sawan out of action a few months after the probe began.

“The ruling political class, accused by rights groups and the public of knowing about the explosive material stored at the port and doing little to protect against it, has closed ranks against Bitar and his predecessor. Both have wanted to interrogate senior political and security officials accused of negligence that led to the blast,” the AP reported on Monday.

Bitar himself is not permitted to speak publicly about the investigation under Lebanese law, but the families of victims celebrated Monday’s dismissal of the lawsuits against him and hoped he might eventually bring justice for their loved ones.

To date, no one has been held accountable for the detonation of over 2,700 tons of ammonium nitrate fertilizer in August 2020, even though the blast killed 219 people and dealt a crippling blow to Lebanon’s already feeble economy.