The Taliban on Wednesday warned of “negative consequences” if the U.S. does not stop sending drones into Afghanistan’s airspace.

“The U.S. has violated all international rights and laws as well as its commitments made to the Taliban in Doha, Qatar, with the operation of these drones in Afghanistan,” the Taliban said on Twitter.

“We call on all countries, especially the United States, to treat Afghanistan in light of international rights, laws and commitments… in order to prevent any negative consequences,” the statement continued.

The Taliban did not specify where American drones were allegedly flying, and there was no immediate response to its demand from the U.S. government.

The Biden administration has stressed the importance of maintaining an “over the horizon” capability to “strike terrorists and targets without American boots on the ground,” as President Joe Biden put it. This strategy is generally interpreted as extensive reliance upon drone weapons.

Pressed for comment by Fox News, the Pentagon pointed to comments made by its press secretary John Kirby last week that “all necessary authorities to execute over-the-horizon counterterrorism operations” would be retained in Afghanistan.

Kirby explicitly stated the Taliban’s permission would not be sought for these operations.

“Without speaking to specific rules of engagement surrounding airstrikes, there is currently no requirement to clear airspace with the Taliban. And we do not expect that any future over-the-horizon counterterrorism strikes would hinge on such a clearance,” he said. 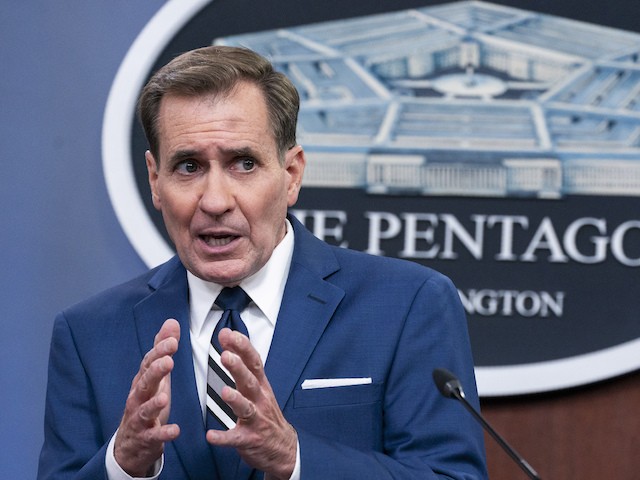 Pentagon spokesman John Kirby, speaks about the situation in Afghanistan during a briefing at the Pentagon in Washington, Tuesday, Aug. 24, 2021. (AP Photo/Manuel Balce Ceneta)

Kirby added that “force protection” would be included with any drone operations in Afghanistan, meaning steps would be taken to keep the Taliban from shooting down the drones.

As analyst and former assistant to the Secretary of Defense Benjamin Schwartz noted at the Wall Street Journal on Monday, U.S. counterterrorism technology is “extraordinary,” but no substitute for human intelligence and ground forces.

This was most vividly demonstrated in one of the most horrifying moments from Biden’s disastrous withdrawal from Afghanistan: the panicked drone strike that killed an innocent man and numerous members of his family in Kabul, including small children.

“To further their propaganda efforts, terrorist groups and their supporters frequently claim U.S. drone strikes kill innocents even when that isn’t the case. The U.S. government has no interest in publicizing its failures. In remote areas of Yemen, Somalia, Afghanistan and elsewhere, it often is difficult to determine the truth,” Schwartz wrote.