The Taliban put several corpses on public display over the weekend, including bloody bodies hung from cranes in the western city of Herat, in a bid to intimidate potential lawbreakers. Onlookers were encouraged by Taliban officials to gawk at the bodies and spread the word.

“I was talking with a customer when I saw Taliban bring two dead bodies on the back of a ranger vehicle. Then they told the people that from now on this is what will happen to anyone who kidnaps people. Many started chanting ‘Allahu akbar’ as a crane hanged the body,” a Herat resident told the UK Guardian on Saturday.

“I was in a taxi, and going towards the downtown, when I saw the Taliban had used a crane to hang a dead body,” said another. “People were running to see it. I was watching it through the taxi’s back window. Then, when I arrived at the next square, I saw another man hanging from a crane.”

“A body was hanging in square after square. I’m still in shock,” the second eyewitness said.

According to the Taliban police chief in Herat, the four slain men they put on display were allegedly “kidnappers” who abducted a father and son. The four were killed in a gun battle that supposedly wounded a Taliban fighter, plus at least one civilian. 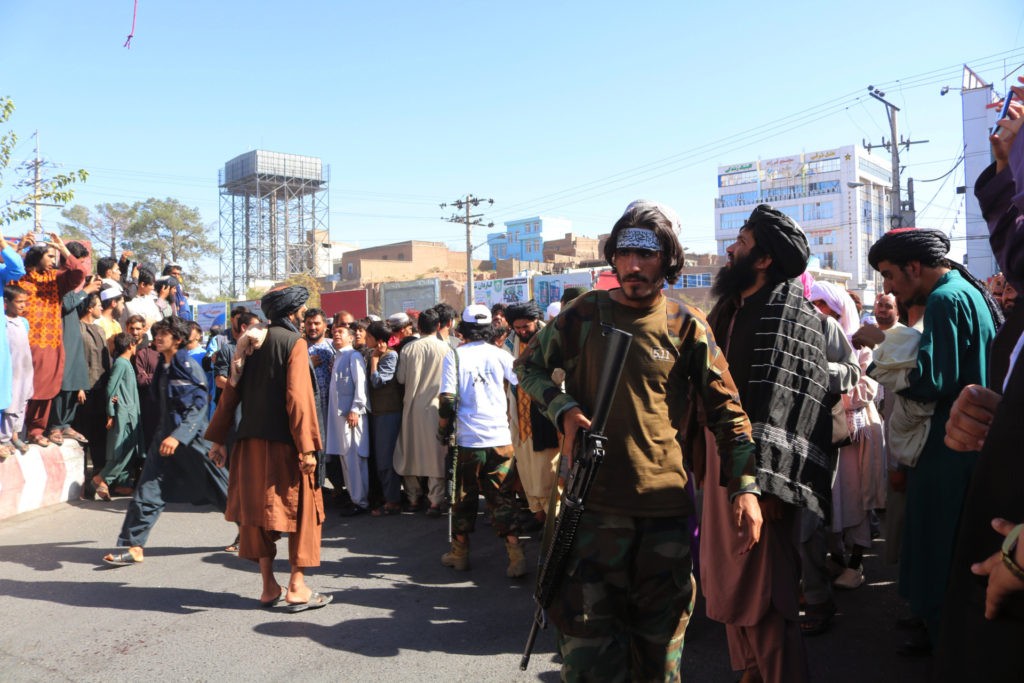 People gather in the main square of Herat city in western Afghanistan, where the Taliban hanged a dead body from a crane, on Saturday Sept. 25, 2021. A witness told The Associated Press that the bodies of four men were brought to the main square and three of them were moved to other parts of the city for public display. The Taliban announced in the square that the four were caught taking part in a kidnapping and were killed by police. (AP Photo)

The deputy governor of Herat told Reuters the kidnap victims were a “local businessman and his son.” The kidnappers were confronted at a security checkpoint and killed while trying to leave the city. Their victims were supposedly released unharmed.

The Guardian said each of the dead men had a note reading “Whoever kidnaps others will end up like this” pinned to his chest.

“The aim of this action is to alert all criminals that they are not safe,” a Taliban commander told the Associated Press.

“No one will tell us what our laws should be. We will follow Islam and we will make our laws on the Quran,” Turabi said, dismissing criticism of the Taliban’s human rights abuses from foreign governments and international agencies.

Australia’s ABC News quoted Taliban media reports that eight kidnappers were recently arrested in southwestern Afghanistan for an apparently unrelated crime. The fate of the detainees was not revealed by these reports.