Russia is currently holding its “largest military exercise in Europe for 40 years,” based on the estimated 200,000 troops participating in the drills, the Economist reported on Monday.

The military exercise, dubbed “Zapad-21,” or “West 2021,” launched on September 10 and is expected to last until September 16, with locations centered upon the western borders of both Russia and its European ally, Belarus.

The drills “could involve up to 200,000 troops from Russia, Belarus and several other countries, if Russia’s defense ministry is to be believed, outnumbering even the very largest NATO exercises of recent times,” according to the Economist.

Moscow stages Zapad regularly and last held the war games in 2017. The Russian Ministry of Defense described this year’s Zapad as “strategic,” adding that “more than 200,000 troops” from both Russia and Belarus are participating in the drill, Defense News reported on September 13.

Russia is caught between embellishing the grand scale of Zapad-21, and downplaying the exact number of troops participating in the drills to comply with diplomatic norms, thus leaving the precise number of participants unknown.

Belarus, a European nation with increasingly close ties to Moscow, has claimed that it will host no more than 12,800 Russian troops for Zapad-21. The figure is just below the 13,000 troop threshold set by the Vienna Document for the maximum number of personnel a military drill may incorporate before the exercise requires foreign observation.

“Russia has said that no more than 6,400 personnel will train on Russian soil” as part of Zapad-21, according to the Economist.

“In the same breath, it repeated the figure of 200,000 troops,” the magazine observed. 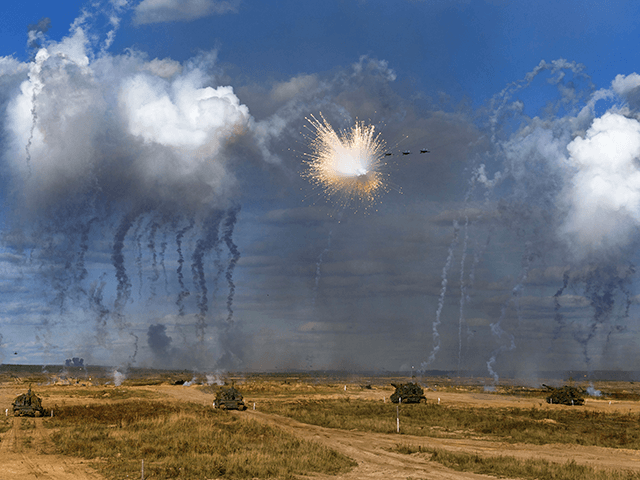 In this photo released by the Russian Defense Ministry Press Service, a joint strategic exercise of the armed forces of the Russian Federation and the Republic of Belarus Zapad-2021 is seen in the Nizhny Novgorod region, Russia, Saturday, Sept. 11, 2021. The military drills were attended by servicemen of military units and divisions of the Western Military District, representatives of the leadership headquarters and personnel of military contingents of the armed forces of Armenia, Belarus, India, Kazakhstan, Kyrgyzstan and Mongolia. (Vadim Savitskiy/Russian Defense Ministry Press Service via AP)

Russia’s Defense Ministry further claims that “80 military jets and helicopters and more than 760 units of various military equipment are part of the drill,” according to Defense News.

This year’s Zapad is noteworthy not just for its massive manpower, but for its extreme proximity to Europe’s eastern border.

“The early signs from the exercise are that Russian troops will be much farther west, and thus closer to Belarus’s border with Poland, than during past Zapad exercises,” Michael Kofman, an expert on Russian armed forces at the Arlington-based think tank CNA, told the Economist on Monday.

“Some maneuvers will take place around Brest, right on the border and just 200km [124 miles] from Warsaw [Poland],” according to the magazine.

Additionally, Zapad-21 began with Russia sending an air-defense system to Grodno, Belarus, where Moscow and Minsk set up a joint air defense center in the spring. Grodno is strategically located at the crossroads of Belarus, Poland, and Lithuania.