Iran’s Islamic Revolutionary Guards Corps (IRGC), the theocracy-controlled wing of the Iranian military and a designated terrorist organization, launched rocket and drone attacks across the border into Iraq on Thursday, targeting Kurdish militant groups Iran claims are a threat to its security.

“In this operation, the headquarters of those conspiring against Iran’s national security was destroyed,” the IRGC declared through Iranian state media on Thursday.

One of the Kurdish groups in question, the Kurdistan Democratic Party of Iran (KDPI), countered by claiming there were no casualties from the strikes and said it was able to capture one of the six Iranian drones employed in the attack.

The mayor of Choman, one of the towns that came under attack, also said there were no casualties.

Kurdish news service Rudaw reported the Iranian attack began around 6:00 a.m. and targeted multiple locations in the Chiman, Haji Omran, and Sidakan regions of Erbil province, using a combination of drones, artillery, and warplanes. The attack came three years to the day after an Iranian missile strike hit KDPI headquarters and killed at least 16 people.

The KRG and its armed forces, known as the peshmerga, were vital U.S. allies in the fight against the Islamic State in Iraq. ISIS remains a threat in Iraq and is attacking the KRG with increasing frequency. 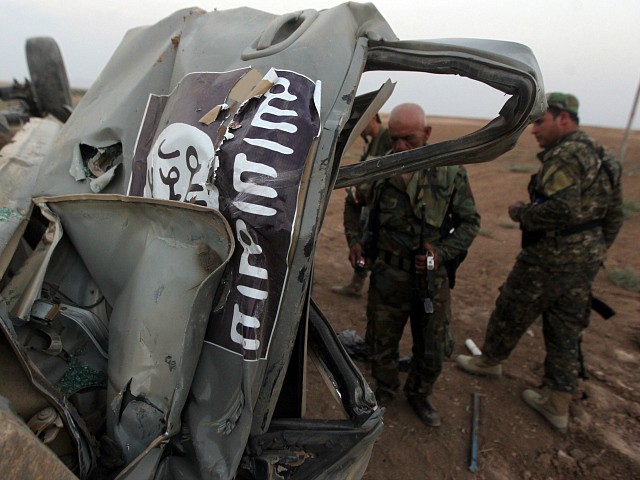 Peshmerga fighters inspect the remains of a car, bearing an image of the trademark jihadist flag, which belonged to Islamic State (IS) militants after it was targeted by an American air strike in the village of Baqufa, north of Mosul, on August 18,2014. Kurdish peshmerga fighters backed by federal forces and US warplanes pressed a counter-offensive Monday against jihadists after retaking Iraq’s largest dam, as the United States and Britain stepped up their military involvement. AFP PHOTO/AHMAD AL-RUBAYE

IRGC ground forces commander Gen. Mohammad Pakpour on Tuesday threatened the KRG with a “decisive and harsh response” if “terrorists” continue to operate out of Iraqi Kurdistan.

“The current situation is no longer tolerable,” Pakpour said, referring to clashes between Kurdish militants and IRGC forces along the mountainous Iran-Iraq border.

Pakpour suggested KRG leadership should not risk their “friendly ties” with Iran by allowing “terrorists who have built dens” in their territory to remain a threat.

“Terrorist and counterrevolutionary groups affiliated with the global arrogance and foreign espionage services have been using the territory of northern Iraq for many years to undermine security and peace in border areas of the Islamic Republic of Iran and harass the inhabitants of these regions,” Pakpour thundered.

“In this regard, the Iraqi government and the officials of the northern region of Iraq have been given the necessary warnings,” he said ominously.

The PDKI shot back that Iran’s airstrikes and artillery barrage constituted a “terrorist” assault on the peshmerga:

#Iran’s terrorist #IRGC carried out another aerial attack against #Peshmerga positions. The Peshmerga Forces shot down one of Iran’s suicide drones before it could reach its target. #Twitterkurds #Rojhelat #Kurdistan #PDKI #KDPI pic.twitter.com/vfiliDVQ4K

A KRG military spokesman responded to Iran’s threats by declaring “Iraq is one” and promising not to “allow anyone to threaten its security and safety.”

The KDPI is one of many Kurdish organizations across the region that longs for greater autonomy from host governments for the stateless Kurdish people, or for outright separation from those governments so a greater Kurdish state can be formed. None of the countries that currently own the territory that would be absorbed into a prospective Greater Kurdistan is terribly enthusiastic about the idea.

KDPI fighters have been scrapping with the Iranian regime since 1989 when KDPI leader Abdol Rahman Ghassemlu was assassinated in Vienna by suspected Iranian agents. Ghassemlu had been targeted as an “enemy of Allah” by the late Ayatollah Ruhollah Khomeini, founder of the current Iranian regime, who declared “holy war” against the KDPI.

Several other KDPI leaders have been assassinated over the years, most recently Mousa Babakhani, a senior official in a splinter party called KDP-I who was abducted, tortured, and killed from a hotel in Erbil in July. The KDP-I accused Iranian agents of murdering Babakhani.

July marked the 32nd anniversary of Ghassemlu’s assassination. Several Iraqi Kurdish party leaders commemorated the occasion by warning the international community to be cautious when dealing with Iran and its new President Ebrahim Raisi, who is notorious for “crimes and massacres” according to an inter-party Kurdish statement. The Kurdish leaders also criticized Austria for failing to bring Ghassemlu’s killers to justice.