The U.S. State Department on Tuesday sent special envoy Zalmay Khalilzad to a meeting in Doha, Qatar, to ask Asian and Middle Eastern powers not to recognize the Taliban as a legitimate government after it conquers Afghanistan.

The State Department claimed it sent Khalilzad to Qatar to deliver a tough message to the Taliban that military conquest is not the answer and it should rejoin peace talks immediately. The Taliban ignored him, conquered three more provincial capitals while the “Troika Plus” meeting in Qatar was getting underway, and published an audio message from its military commander Mohammad Yaqoob ordering his fighters not to harm Afghan troops and officials if they surrender.

Khalilzad’s more realistic mission was to plead with Afghanistan’s neighbors, especially Pakistan, to announce that they will not recognize a Taliban government that conquers Kabul by force of arms. Pakistan, Saudi Arabia, and the United Arab Emirates were the only powers to officially recognize the previous Taliban government in the 1990s.

State Department spokesman Ned Price said on Tuesday that Khalilzad was dispatched to Qatar to “advance a collective international response to what can only be termed as a rapidly deteriorating security situation” and “press for a reduction in this violence and a ceasefire and commitment by the part of these regional and broader governments and multilateral and international institutions not to recognize any government that is imposed by force.”

“It is not just our contention that any government that comes to power in Afghanistan at the barrel of a gun will lack international support and international legitimacy. It is, in fact, the consensus that has emerged and that has been stated any number of times,” Price said. 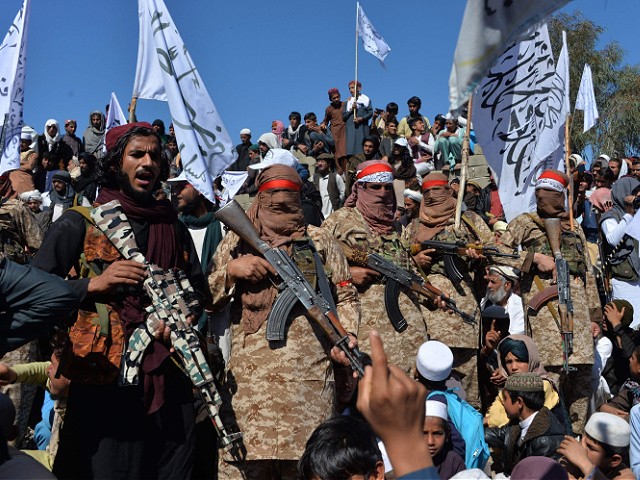 Afghan Taliban militants and villagers attend a gathering as they celebrate the peace deal with the U.S. on Afghanistan, in the Alingar district of Laghman Province on March 2, 2020. (Photo by Noorullah Shirzada/AFP via Getty Images)

Price insisted “a prolonged, protracted period of violence” is “certainly not in the interests of the people of Afghanistan and not in the interests of what the Taliban seek.” Taliban leaders apparently disagree, as they were wrapping up the conquest of their ninth provincial capital in less than a week while Price was speaking.

Dodging questions from increasingly frustrated reporters who wanted to know if the Taliban’s blitzkrieg was a violation of its February 2020 withdrawal deal negotiated by Khalilzad, Price claimed the Taliban “has adhered to an important part of the U.S.-Taliban agreement” – namely, “the proviso that they not target U.S. or coalition forces” – but allowed that “levels of violence are unacceptably high.”

Price insisted the “capable and highly numerically superior fighting force” of the Afghan government would soon turn the tide of war against the Taliban and “impose even greater costs” on the insurgents if they persist in overrunning provincial capitals. He leaned heavily on the threat of international sanctions and global refusal to recognize a Taliban government as a deterrent, without explaining how the U.S. would be able to enforce such a policy on Afghanistan’s regional neighbors, much less the hostile governments in China and Russia.

As of Wednesday, Pakistani officials have refused to rule out recognizing a Taliban government, although they have said they would prefer to see an “inclusive” political system in Afghanistan. Afghan officials, with support from the government of India, on Tuesday repeated their accusations that Pakistan is supporting the Taliban insurgency.

The Associated Press wrote on Wednesday:

Sweeping Taliban conquests in Afghanistan this week are challenging the Biden administration’s hopes that a desire for international respect – and for international aid and cash – will moderate the fundamentalist militia’s worst behaviors when the U.S. ends its war there.

The Biden administration is also pleading with China and Russia to help but, like the Pakistani government, they have been more interested in criticizing President Joe Biden for unleashing the Taliban and destabilizing the region with a “hasty” U.S. withdrawal. All three countries are worried about Taliban extremism spilling across their borders and destabilizing their own restless populations.

China’s state-run Global Times on Wednesday argued the United States is “incapable of handling the current situation in Afghanistan since its withdrawal” and said its attempts to beat the Taliban back with airstrikes have failed.

The Global Times quoted Chinese experts who suggested “China, as a neighbor, a good friend and a big power, could do something to help mediate between the Taliban and the Afghan government to help them go back to the negotiating table.”