Police fired gunshots in Myanmar on Tuesday as large numbers of protesters ignored the military junta’s ban on public gatherings. Police reportedly arrested 27 people and injured five, one of them critically.

According to a doctor in the capital city of Naypyidaw cited by Sky News, several of the injured people were struck by rubber bullets the police fired. Shots were also fired in the air when crowds in the capital and other cities refused orders to disperse.

Reuters reported that one female demonstrator was critically injured after police shot her in the head. Her doctor said the round was a “live bullet,” not rubber, and he was “100 percent certain the injury is fatal.”

Video of the shooting circulating on social media showed the woman was wearing a motorcycle helmet when she was struck in the head and collapsed. Photos of her helmet displayed a hole consistent with penetration by live ammunition. The Associated Press cited local media accounts that said the victim is 19 years old.

The United Nations on Tuesday noted that “numerous demonstrators have been injured, some of them seriously,” and said the “use of disproportionate force against demonstrators is unacceptable.”

The military junta imposed an 8:00 p.m. curfew and banned gatherings of more than five people in Myanmar’s large cities, with penalties of up to six months in prison for disobedience, but protesters still filled the streets to demonstrate against the overthrow of the civilian government and imprisonment of top officials, including de facto national leader Aung San Suu Kyi. 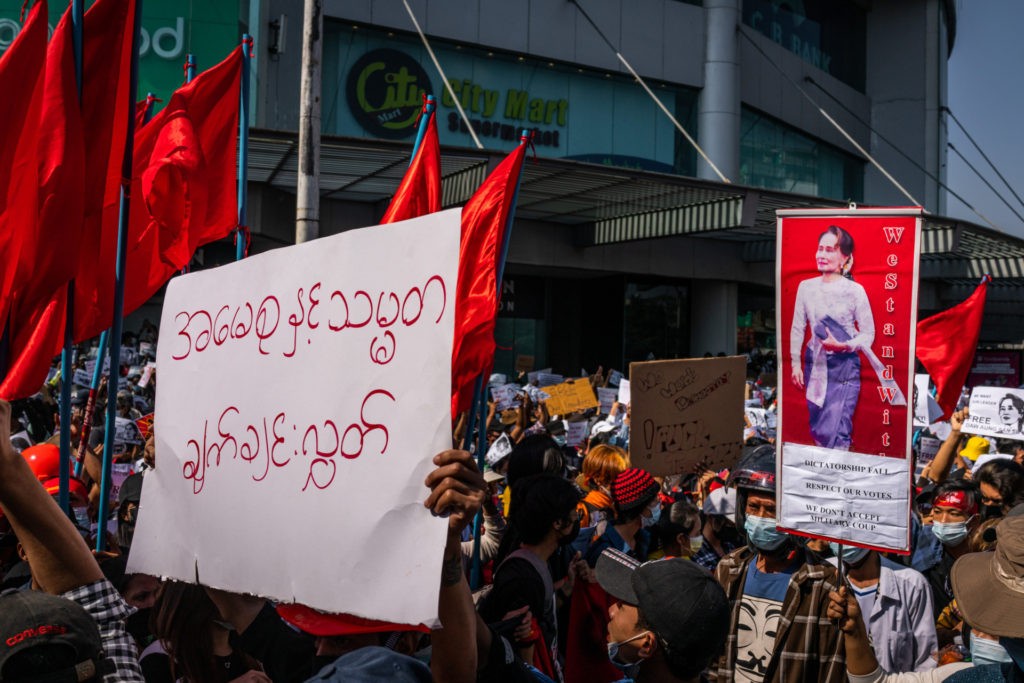 Protesters hold images of de-facto leader Aung San Suu Kyi on February 09, 2021 in Yangon, Myanmar. Police fired rubber bullets, tear gas, and water cannon to disperse protesters at demonstrations across the country, and at least two people were in critical condition from the injuries sustained. (Photo by Hkun Lat/Getty Images)

The junta claims it had to overthrow the government due to widespread fraud in the last parliamentary election, where Suu Kyi’s National League for Democracy (NLD) party won a commanding victory. Election officials insist there is no evidence of the fraud claimed by the military.

The protesters disdainfully rejected military leader Gen. Min Aung Hlaing’s televised promise to create a “true and disciplined democracy,” hold a “multiparty election” within a year, and “hand the power to the one who wins.”

Reuters observed that civil disobedience by hospital, school, and government employees appears to be growing, but crowds in the streets of Yangon, the largest city in Myanmar, were noticeably smaller on Tuesday. Unconfirmed reports from Naypyidaw, Yangon, and several other cities claimed some police officers switched sides and attempted to defend the protesters.

Another sign of short-term success for the coup is that many foreign governments have called for the release of its political prisoners, but few have taken concrete action against the junta or demanded the return of power to Suu Kyi’s government. One of the few exceptions is New Zealand, which suspended all high-level contact with Myanmar on Tuesday and imposed a travel ban on military leaders.

New Zealand’s leftist Prime Minister Jacinda Arden said on Tuesday her government would “make sure any funding we put into Myanmar does not in any way support the military regime,” potentially freezing an aid program worth about $10 million per year.

“We do not recognize the legitimacy of the military-led government and we call on the military to immediately release all detained political leaders and restore civilian rule,” declared New Zealand Foreign Minister Nanaia Mahuta.

Another important neighboring country, the Philippines, initially described the coup as an “internal matter” and pledged not to “interfere,” but later the Philippine government expressed “deep concern,” and on Tuesday Foreign Secretary Teodoro Locsin, Jr. called for “complete restoration of the status quo ante.”

The Associated Press noted that the situation in Myanmar could become much worse, very quickly, because so far the government has deployed the police to confront the protesters, not the military units that brutally crushed past uprisings and conducted an ethnic cleansing campaign against the Rohingya Muslims. After a week of attempting to ignore the protests, military-controlled state media outlets on Monday began ominously denouncing them as threats to national security.