Hundreds of unionized farmers and their supporters in India blocked roads and highways in Punjab on Tuesday, paralyzing traffic and shutting down commerce to protest what they describe as “anti-farmer” agricultural laws passed in September.

Farmers’ unions called for a nationwide strike after five rounds of talks with government officials failed to resolve their grievances. The government contends the three agriculture laws passed in September will help farmers to sell their products in more markets across India and provide them with better protection against unscrupulous trade practices.

The farmers say the laws will force them to sell their crops to big agricultural corporations at ruinously low prices, put them at a disadvantage in disputes with their corporate customers, and increase the risk of fraud by removing many of the licensing requirements for farming and trading. They also fear the new system will shift business away from the local markets, or mandis, that have long been a feature of Indian agriculture. 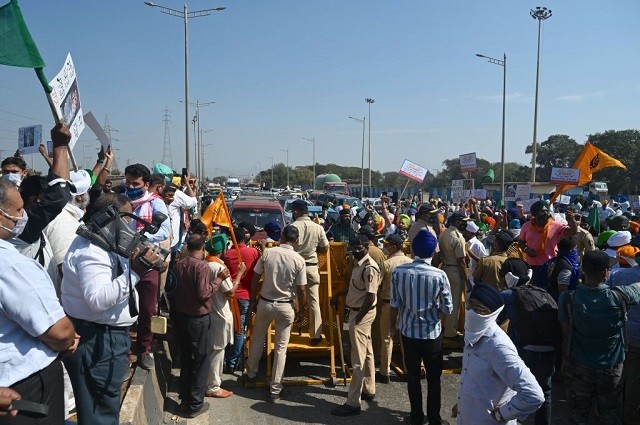 Protesters blocking a highway shout slogans during a nationwide general strike called by farmers to protest against the recent agricultural reforms in Mumbai on December 8, 2020. (Indranil MUKHERJEE/AFP via Getty Images)

Indian officials have offered several amendments to allay these concerns, but farm unions remain intractably opposed to the agriculture laws. 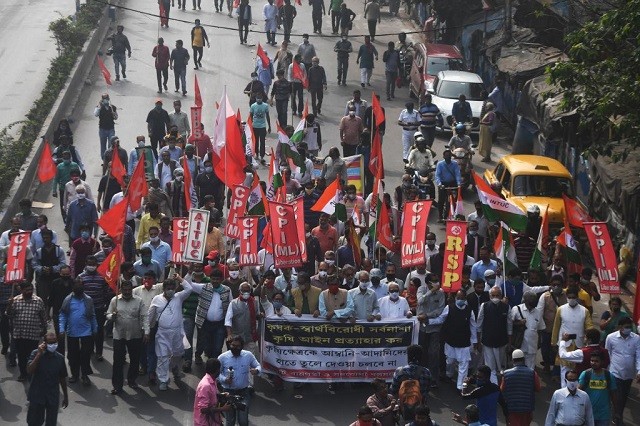 Leftists activists march along a road during a nationwide general strike called by farmers against the recent agricultural reforms in Kolkata on December 8, 2020. (DIBYANGSHU SARKAR/AFP via Getty Images)

“What these new laws do is they solve none of the structural issues in agriculture but throw the whole sector to the corporates, to the crony capitalists and to the big businessmen, and that is of great concern to the farmers, and the laborers, and the traders, and everybody who is involved with the agrarian system,” author Amandeep Sandhu, an expert on the history of Punjab, told Global News on Monday.

“They’re allowing the corporates to draw lopsided agreements with no real legal recourse for the farmers and that will really shatter the farmers if the corporates renege on their promises,” Sandhu said. He added that farmers are upset at the government for making such major changes to agricultural markets during the coronavirus pandemic. 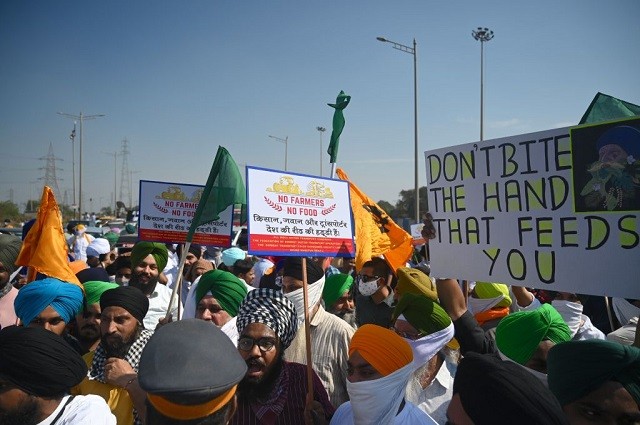 Protesters holding posters argue with policemen while blocking a highway during a nationwide general strike called by farmers to protest against the recent agricultural reforms in Mumbai on December 8, 2020. (INDRANIL MUKHERJEE/AFP via Getty Images)

TOI noted that other unions are providing support to the farmers, along with many public officials in Punjab. The provincial civil service union said over 50,000 government employees took “casual leave” this week to show their support for the striking farmers.

At Ghazipur, in the outskirts of New Delhi, hundreds of farmers blocked all entry and exit routes. They chanted slogans such as “Long live farmers unity” and carried banners, some of them reading “No farmers, no food.” They allowed emergency vehicles including ambulances to pass through.

Darshan Singh, a farmer at Ghazipur, said the protesters would not back down. “We are determined to win this fight,” Singh said. “We will go back only after the (new farm) laws are dismissed.”

At Singhu, another area in the outskirts of New Delhi where farmers have also blocked highways, demonstrators burned an effigy on which the names of Prime Minister Narendra Modi and some Indian corporate leaders were written, while chanting slogans including “Modi has died!”

According to the Associated Press, protest leaders are threatening to “intensify their agitation” by occupying toll plazas across the country. Well over half of the Indian population works in the agricultural industry or depends on it for their livelihoods.

Demonstrations have been held in solidarity with Indian farmers in other countries, including Canada and the United States. Last weekend saw sizable rallies by Indian-Americans in San Francisco, Indianapolis, Chicago, and Washington, DC.