A massive explosion at a pesticide plant in Yangcheng, China killed 47 people and injured 640 others on Thursday, with more fatalities expected as rescue workers comb through the rubble.

Sensitive to growing public outrage over a series of industrial accidents, Chinese President Xi Jinping ordered an investigation of the accident on Friday. Several employees of the plant were immediately detained by police.

The explosion at the Jiangsu Tianjiayi Chemical Company was so powerful that it caused a magnitude 2.2 earthquake tremor. Residents of nearby Yangcheng did not have to wait for geologists to measure the incredible force of the explosion, as the blast wave shattered the windows of residential buildings over a mile away, blowing glass shards into the faces of terrified onlookers:

Windows up to four miles from the plant were reportedly blown out by the explosion, leading to a huge number of injuries from broken glass. Schools in Yangcheng were closed on Friday as thousands were evacuated to safer areas. Hospitals across the province struggled to cope with casualties, some of them evidently suffering from the inhalation of dust and toxic substances.

“There was one loud bang followed by a long rumble,” an eyewitness told Reuters. “All the windows were smashed. I went to have a look. Near the site, there was blood everywhere. People were crushed.”

Early theories of the explosion suggest it was caused when a tanker truck filled with natural gas caught fire and detonated a nearby storage area filled with containers of benzene. Five different sites around the chemical plant were ablaze before some 900 firefighters managed to stabilize the situation. The factory has been almost completely destroyed.

Chemical plants in Jiangsu province have an alarming record of deadly explosions over the past decade, despite Beijing’s efforts to implement better safety regulations. Critics believe too many corners are cut in the rush to meet unreasonably high production targets and say regulatory agencies are among the few Chinese bureaucracies that are arguably understaffed. 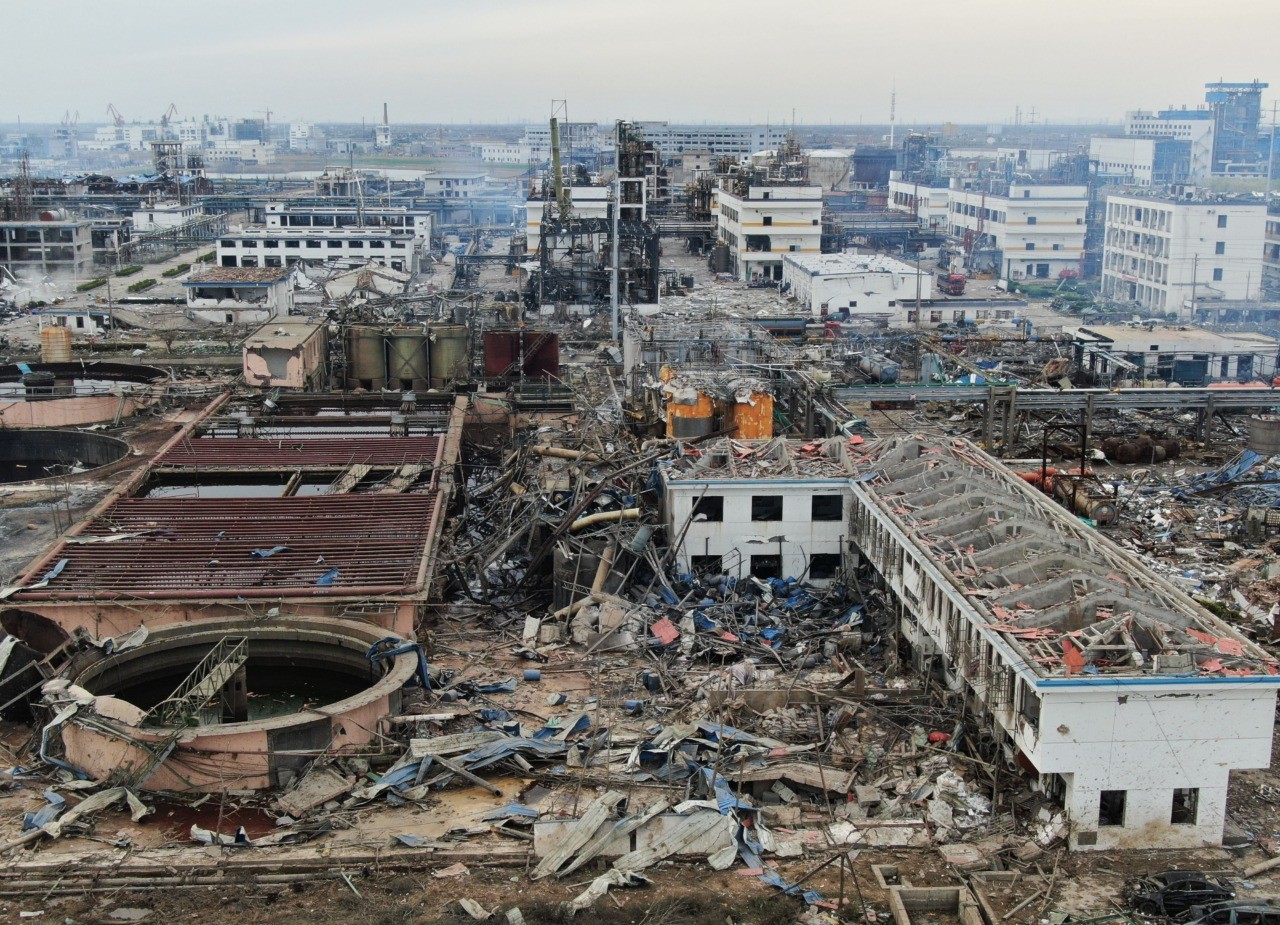 An aerial view shows damaged buildings after an explosion at a chemical plant in Yancheng in China’s eastern Jiangsu province early on March 22, 2019. – Chinese President Xi Jinping ordered local governments on March 22 to prevent any more industrial disasters after a chemical plant blast left 47 people dead, injured hundreds and flattened an industrial park in the latest such catastrophe to hit the country. (STR/AFP/Getty Images)

Given the massive manpower devoted to activities such as policing speech on the Internet, cynical observers wonder if Chinese regulatory agencies are understaffed because Beijing doesn’t really want to know how many shortcuts are taken to meet its production demands.

The Jiangsu Tianjiayi plant has been cited for 13 different safety hazards, including improper handling of benzene, and has accumulated $267,000 in fines for violating environmental regulations over the past three years. An inspection of chemical factories in the Yangcheng area after a 2017 explosion at a different facility killed 10 people discovered over 200 safety hazards, ranging from leaky pipes to inadequately-trained employees. The chairman of the company that owns the Jiangsu Tianjiayi plant was convicted of toxic waste dumping in 2017.

Chinese President Xi Jinping, currently visiting Italy, ordered a full investigation of the incident on Friday, along with a massive search and rescue effort to find victims of the explosion.

“There has recently been a series of major accidents, and all places and relevant departments must fully learn the lessons from these,” Xi said.